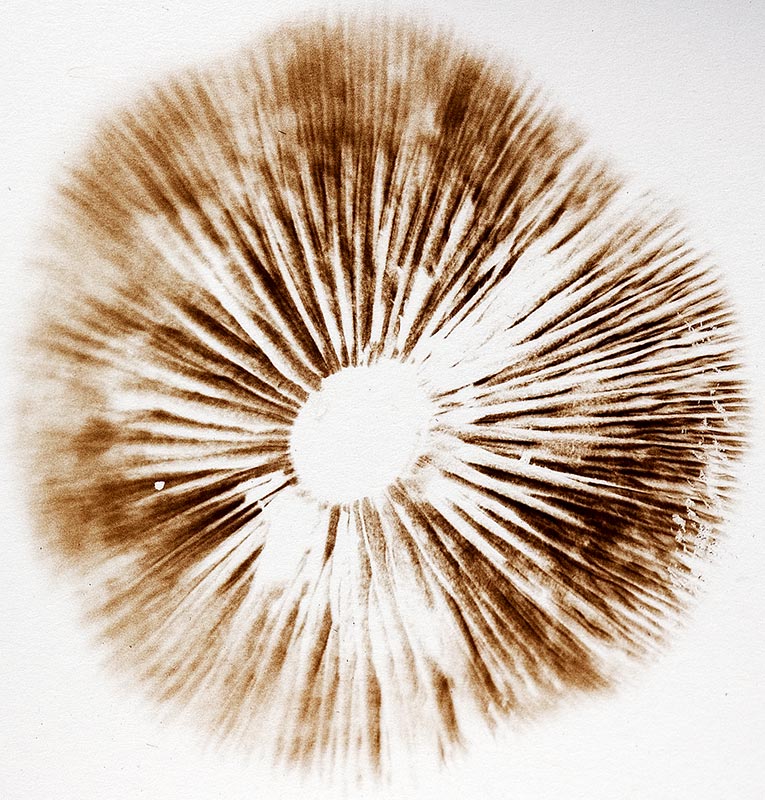 The gill structure of mushrooms can be observed by looking at the underside. An alternative method is to make a spore print. Such a print shows the arrangement of the gills.
Best to take a very fresh mushroom, break off the cap and lay it gill-side down on a surface on a contrasting colour; white gills need a dark surface. Leave overnight. Carefully remove the cap from the surface and you should have a print of the gills made by the spores.
From what I remember from college days, the spores do not simple drop from the gill surface but are shot out to about half way the distance between adjoining gills.
Actual spores can be round or long but are only in the 10-30 micron size.

This spore print is from a little browm mushroom (a LBM) that was in a poor condition when collected yesterday - but it was the best I could find; diameter 35mm. It looks like the outer rim of the cap, on the left side, was raised above the paper surface allowing the spores to 'wander' further than 1/2 the gill space between gills.

Fresh undamaged caps give a nice pattern of radiating lines from a central axis.

Another option is to do them on glass. The first spore prints I tried didn't seem to produce anything, either too old specimens or white spores on white paper, not sure which!

I then tried some on a glass plate, and got some nice prints! I think light or dark spores will show up on glass so that's the advantage, the disadvantage is they're probably harder to photograph on glass!

Interesting that you can almost see 3d structure in your print, particularly on ght right. (It's almost like looking up into the gills, the darker patches being more shadowy and so deeper!)
Top

Black paper works well for pale ones. The choice of background can be important as it can infuence the perceived colour of spores, a diagnostic character, as is shape and size of individual spores.

Harold
My images are a medium for sharing some of my experiences: they are not me.
Top
Post Reply Previous topicNext topic
3 posts • Page 1 of 1