The specimen had a very curved abdomen and as you can see it does not have fly mouthparts or antennae. It did look like this specimen
http://bugguide.net/node/view/168101
but the abdomen was not as plump and had a slighty more curved down shape. Attracted to lights at night. If it is a Sausage Fly, it puts it into the Family Formicidae - Ants-Subfamily Ecitoninae - Army Ants (Never heard of army ants in New Hampshire 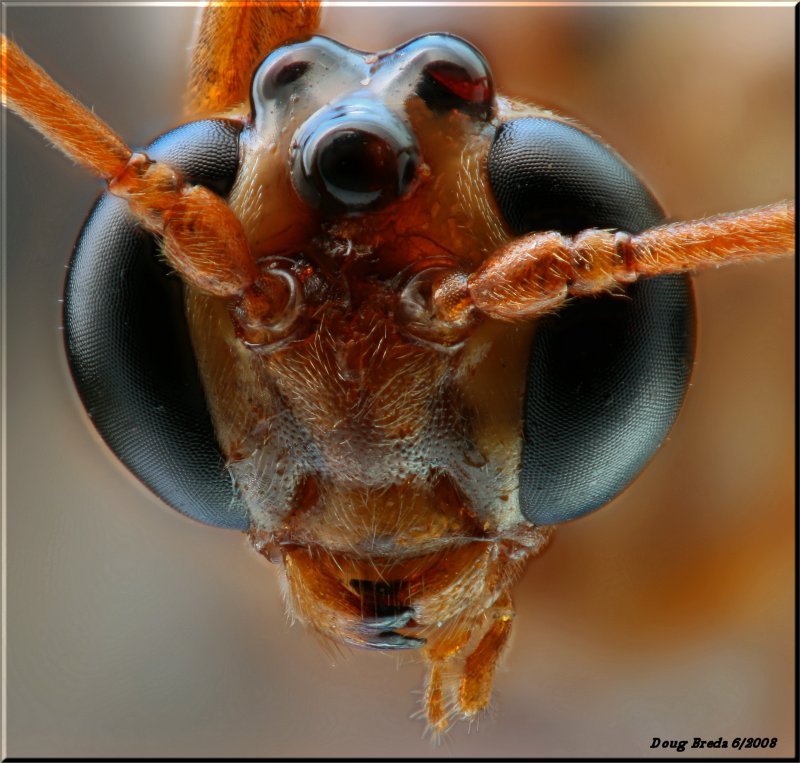 Last edited by beetleman on Sat Aug 30, 2008 7:39 am, edited 1 time in total.
Take Nothing but Pictures--Leave Nothing but Footprints.
Doug Breda
Top

Definitely hymenopteran rather than dipteran - weird named creature! Why call it a fly if it's an ant, I do wish they'd name things consistently!!

From the picture alone I would have guessed it was a wasp!

That thing has the biggest oceli I've ever seen! (At least compared to the size of it's head!)

My recollection (I haven't looked up to verify) is that "Sausage fly" is a tropical (African?) common name for male army ants, not really a separate species. In any case, I wouldn't be surprised if this is indeed a drone ant (not an Army ant, thank goodness!). It has the look of an ant, and it has very highly-developed eyes, which is typical of male ants that need very high-quality sensor technology to spot and home in on those flying females.

Does it also have unusually well-developed muscles in the thorax (middle body section at base of wings?).

If Gordon comes around here, he will be able to tell you for sure.

Potential prey for a toad in the hole?

A very good high mag stack, Doug! Did you achieve this with your combined lenses set-up?

Neivamyrmex is a genus that is occuring in the New World reaching up north as far as Iowa and Illinois, including Oklahoma. I haven´t heard of Neivamyrmex in New Hampshire. Though, my literature on North American ants is a bit outdated. But finding them could happen, even if they shouldn´t be naturally occuring there, one could think of a displacement by human activities.
The term "Army ants" refers to a typical life-history with workers foraging in groups and nomadic behaviour with statary and migratory phases. Neivamyrmex show this life-style and thus are characterized as Army Ants. So there are Army Ants in the U. S., including Oklahoma. So careful next time you walk bare-footed there, Mike! (Naw, just kiddin´):D
To my knowledge the males of Neivamyrmex are colloquially referred to as "sausage flies" in the U. S. due to their sausage-shaped abdomen.
Now Doug, the circumstances under which you found the specimen (quote "Attracted to lights at night") would match a male Neivamyrmex.
And I can´t tell from the head only, if this isn´t a male Neivamyrmex for sure, never had one under my scope, but the antennae and small mandibles of your specimen here seem a bit unusual for what I would expect from a Neivamyrmex male. A full body shot would help. And as you have the specimen at hand you could examine if genital appendages are visible at the tip of the abdomen, a feature that usually characterizes male ants.


Yeah, let´s hope that Gordon pops in here, he will definetely know as these belong to his "loved ones".

Ha! As long as Gordon is absent, why not look at Gordon´s web site!
And that is what I found there, a picture of a male Neivamyrmex swainsonii:
http://www.armyants.org/armyants/images ... nmhead.jpg

Well, I think we can safely say that it isn´t a specimen of this species and I would be surprised if it was a Neivamyrmex or ant at all with these antennae and small mandibles.
But addmittedly foreign ants, especially the males one doesn´t see that often, sometimes can look strange. If I was shown Gordon´s picture only I would have difficulties to ID it as an ant. And the more weird life forms you´ve seen the more cautious you become with excluding anything. Biodiversity is amazing!

I was so sure of myself I hadn't looked up the link on Bug Guide you posted--But I did today after reading Betty's comments. I'll just blush and sit back and watch and see if one of the fine minds here can clarify things further....
Mike Broderick
Oklahoma City, OK, USA

Googling "Sausage fly" does take you to this Wikipedia link:

So at least I wasn't totally out of my mind with what I said about sausage flies! I couldn't resist pointing that out, but I'm still going to hang around in the back row here....
Mike Broderick
Oklahoma City, OK, USA

Thank you everyone for the great comments and discussions. I do not have this particular specimen on hand but I did find a couple in my collection (which I have not looked at in a long time). Looking at these I would have to say they are some kind of wasp and not an ant. This picture should help out greatly in making an ID. The stack was taken with the 100mm macro & reversed 50mm. 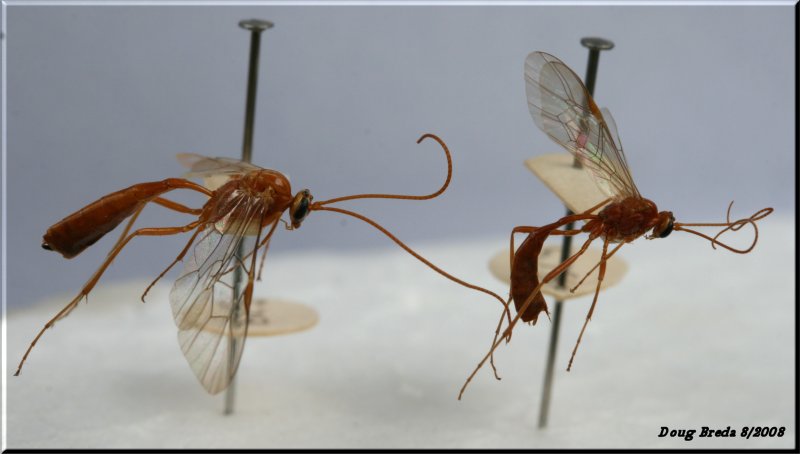 Ahh yes I think that's an ichneumon of some sort.. Maybe a yellow ophion (Ophion luteus) or something like that.
Top

My immediate reaction was Ophion too but it is a family with a huge number of species and I don't know how many might look similar.

Good point Harold. Don't take any notice of my stab at a species, I'm not remotely confident when dealing with Ichneumons, there are far too many and I have no specific literature as yet on them... I do think it's likely an Ophion though.
Top
Post Reply Previous topicNext topic
12 posts • Page 1 of 1