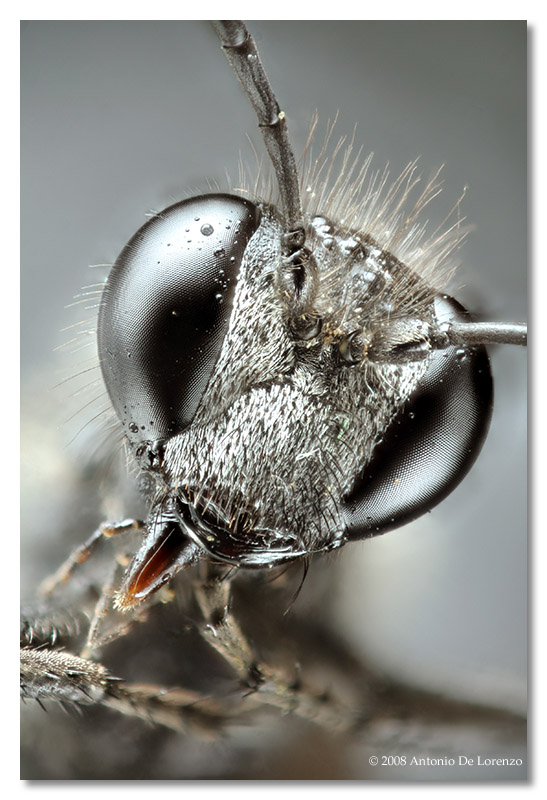 A nice, strong composition with a perfectly harmonious background.

I'm not sure what is going on on top of the head. There should be three ocelli in a triangle but there are rather more bulges of about the right size.

I suspect the extra bulges are water droplets, judging from others on the eyes etc.

The composition, lighting, and stacking are all very nice, Antonio -- well done!

Harold: I think some of them just droplets.

Technically it is good. Maybe a little too light at some places on my monitor, and the legs are distracting a little.
Péter
Top

Nice shot! Like the 'tongue' sticking out! Also like the monochromatic silver look you've got here. Due you think that's due to the aluminium reflectors you used?

I see what Harold means about the simple eyes, but I notice some drops of water on the compound eyes (Same problem as me, too impatient to get stacking once the bug is out of the fridge!!) so I wonder if some of those bumps on the head are drips of condensation. It's definitely not a stack alignment issue as that would also be apparent in other areas of the image...

What software did you use for the stacking, and what did you use to do the focus steps?
Top

acerola wrote:Maybe a little too light at some places on my monitor

Yes I meant to say that as well. The flash highlight on the top of the left eye does appear slightly burnt out on my monitor too, but I appreciate this can be a difficult balancing act!

I suspect Antonio may have his screen setup slightly darker than mine!
Top

lauriek wrote:The flash highlight on the top of the left eye does appear slightly burnt out on my monitor too

Monitor settings won't matter much. Portions of that area are full of 255's so they will appear pure white on any monitor.

But I assumed this was intentional, in keeping with the somewhat stark "silver" theme.

It is a vexing tradeoff.

For scientific purposes, we normally want photos where nothing is blocked up or blown out -- no pure blacks or pure whites.

But such images often are not as striking as more contrasty photos where actually some information has been lost.

Sometimes the best one can do is to shoot with slightly "flat" illumination so that everything gets captured, then punch up the contrast later if appropriate for a particular audience.

Thanks so much to everyone,

Rik you my thoughts centered,

global stack is 20 frames, hair and eye edges is 28 frames,
aligned with CombineZM, stacked with Tufuse,

Nice portrait Antonio - I think the aluminum reflectors and the water droplets work well together to give it a metallic, Robowasp look.