Some stacks of live subjects with the Helicon Fb tube

Some stacks of live subjects with the Helicon Fb tube

I am finally beginning to do image stacking. For focus bracketing I use the Helicon Fb tube, and with this I have done some calibrations of the focus steps and am finding that the default values are excessively small and that I can use much larger focus step sizes. Probably larger than what I have used here. The pictures for these stacks were done as staged shots. I am still playing with ways to hold the subject and camera. The images were stacked in ZS.

One subject for stacking that has interested me are the strange 'Derbid' plant hoppers. My favorite species of these is this one, called Apache degeeri. Pictures were taken at our backyard patio table by placing the subject inside a screen bug cage (they can fly), and mounting the camera on a Plasticine clay rig that was sitting on a paper plate. Here, the camera height and angle could be quickly adjusted, and alignment and 'focusing was also quickly and precisely done by simply moving the cage or the plate around. Pictures were taken in 'burst' mode with a cable remote.
Canon t5i, Canon 100mm f/2.8L macro at f/6.3, Raynox 150. Lighting was natural lighting but this was supplemented with a pair of LED bicycle helmet lights attached to the lens. This added lighting may be the way I will go when I start stacking in the field. 80 images were used in this stack. 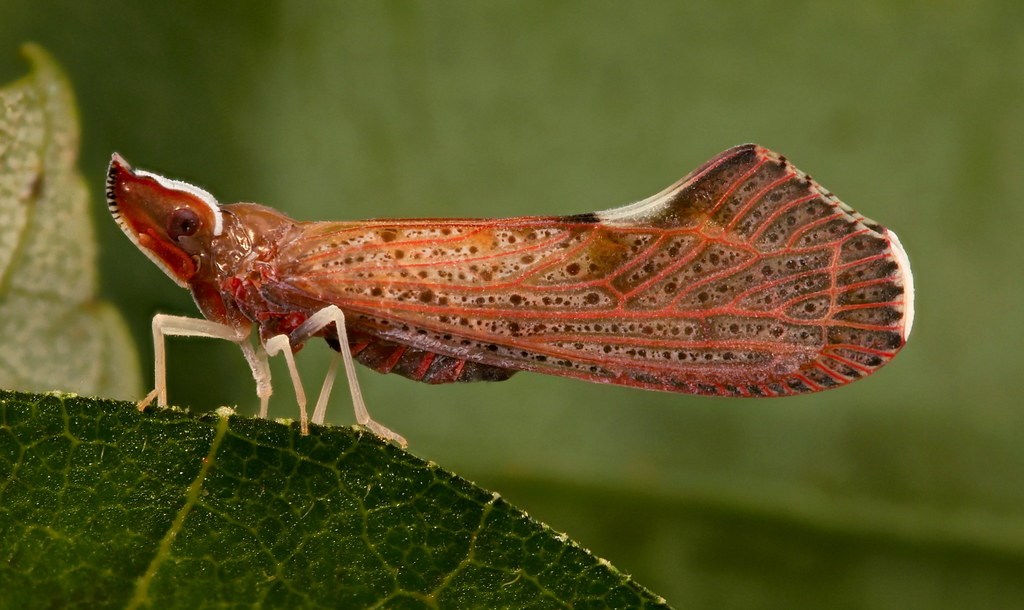 
As it is late summer here, one can easily find 'flower crab' spiders on the abundant goldenrod. I generally notice these by finding an insect on a flower that looks 'wrong'. Usually, there is a crab spider at the end of the dead insect. This is Misumenoides formosipes, and in her case she had taken a honey bee. Here I transferred her to a black-eyed Susan flower from our garden. She happily nestled down into it. The stack was taken at our dining room table where the flower was held by one of those bendy soldering clamps, and the camera was mounted on a tripod that had a 'boom' arm so it could lean over and also rest on the table. The pictures were taken in 'burst' mode by pressing and holding the shutter button (I don't yet have a remote cable for the camera used).
Canon 5diii, Canon 100mm f/2.8L macro at f/5.6, Raynox 150. Illumination was by a fluorescent ring light from an old dissecting microscope. I will need to experiment more with camera settings if I use this light source source again. 110 images were used in this stack. 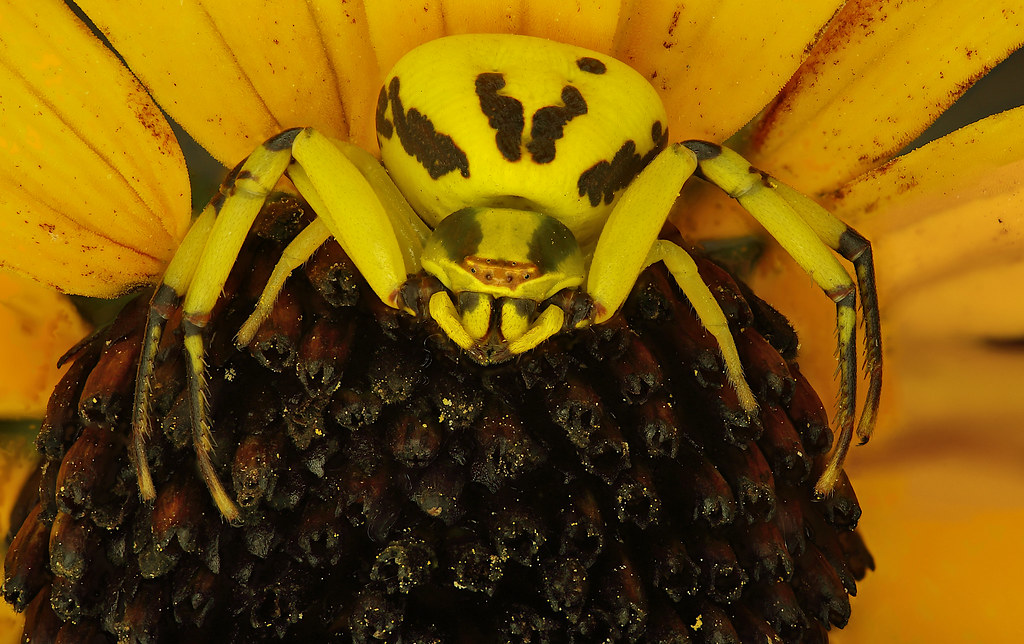 The Queen on Her Throne by Mark Sturtevant, on Flickr[img]http://www.photomacrography.net/forum/userpix
Mark Sturtevant
Dept. of Still Waters
Top

However, they are misplaced in the Nature forum. We'll move them to Technical and Studio because the subjects were placed in controlled surroundings for photographing.

Quoting: I generally notice these by finding an insect on a flower that looks 'wrong'. Usually, there is a crab spider at the end of the dead insect.


Every time I found one it was exactly like that too ... they can match their colors so exactly with the flowers , they are almost impossible to see, and they wait underneath the petals...
I believe (not sure) they can change color if they change to a different flower...
YAWNS _ (Y)et (A)nother (W)onderful (N)ewbie (S)hooting
Top

Mark, these images are quite fantastic! Your work with live subjects amazes me.
Herman Munster www.flickr.com/photos/153096150@N05
Top