In an earlier thread ( http://www.photomacrography.net/forum/v ... light=bx50 ) I asked advice about DIC performance on an Olympus BX50 microscope.

The most useful advice was from Pau, who provided me with an Olympus manual for a universal condenser that contains tables of UIS2 and UIS objectives and their matching DIC prisms. I did not find this information in any other online document, and Olympus seems to have gone to great lengths to remove all information on UIS optics in favor of their newer UIS2 series (for which plenty of information is available).

It turns out that I did not have the right condenser prisms for any of my objectives. I now got the "right" U-DPA20 prism for the UPlanApo 20. I can now see a substantial difference from the U-DP20 prism I was using previously. The following subject (transversal section of Amphioxus from a Victorian or Edwardian slide) is maybe not the best, but it does show the difference. 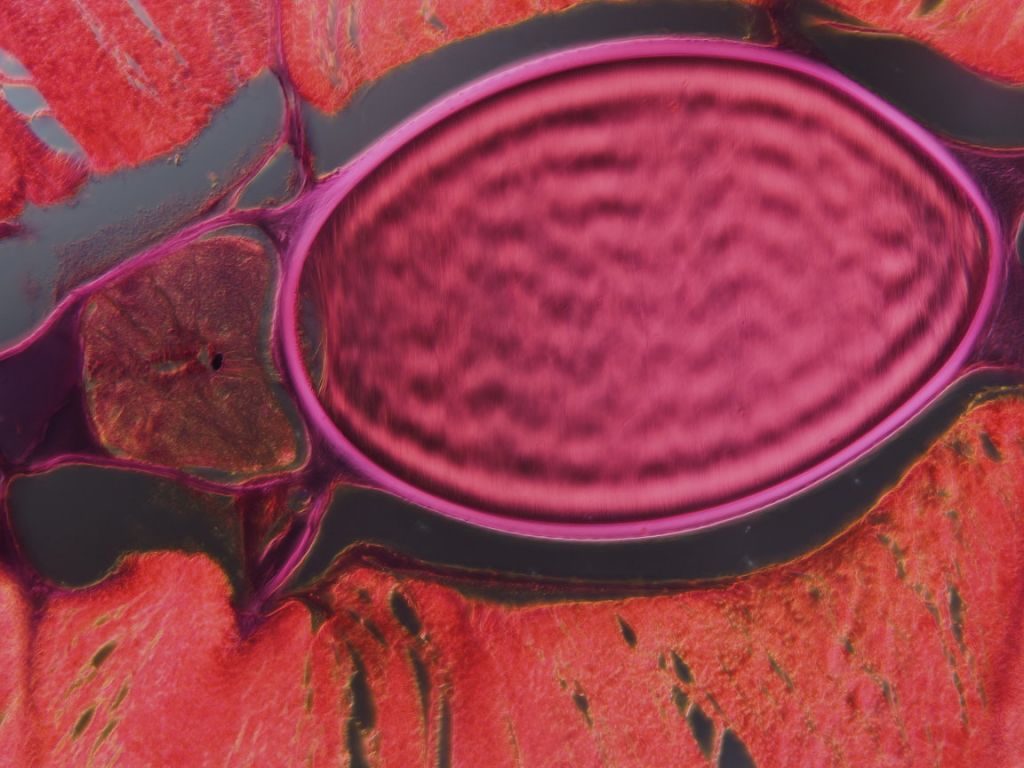 U-DP20. Uneven background illumination, impossible to obtain a uniform dark-gray background by fiddling with the controls. 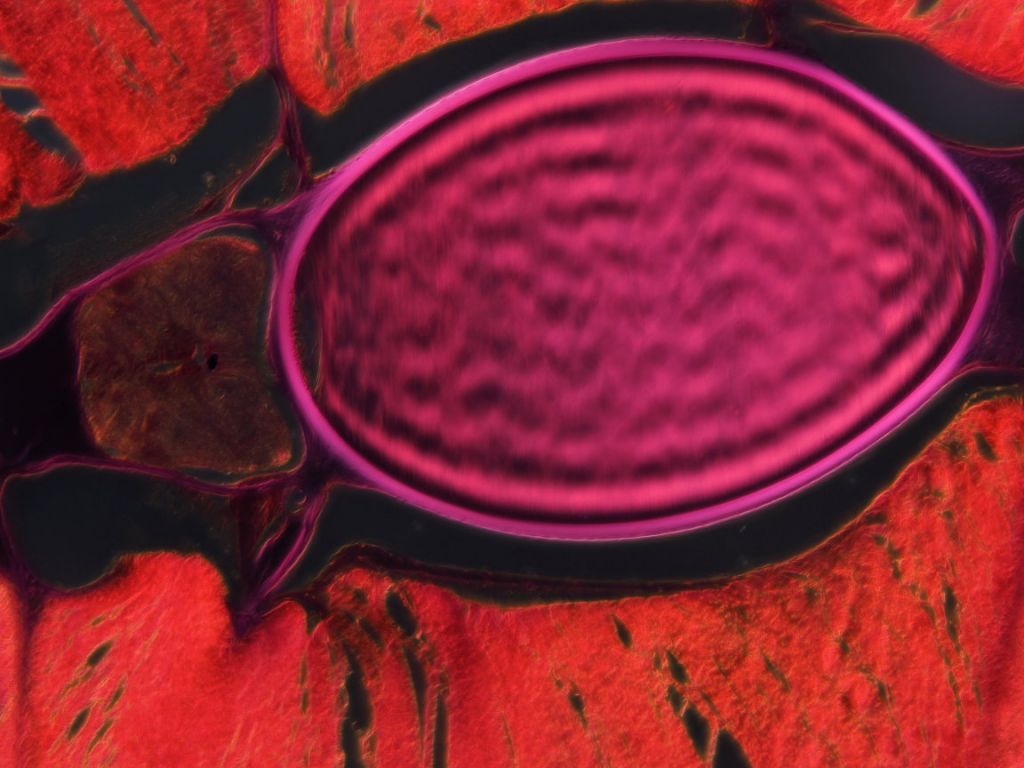 My take-away is that Olympus made (and still makes) a large number of condenser DIC prisms, each tailored to one or just a few objective models. There is no "mix and match" with these components, you just need to have the right one because the condenser DIC prisms sit at a fixed height in the condenser and cannot be moved. The clear opening of these prisms also differs (the U-DPA20 has an opening much wider than the U-DP20). The two prisms are for use with the UPlanApo 20x and UPlanFL 20x, respectively, and one should just stick to that.

Same thing if one changes the top lens of the condenser to allow oil immersion, one needs to get a whole different set of DIC prisms even if one keeps the same air objectives. The only thing that remains the same is the U-DICT or U-DICTS top prism and its polarizer (but note that some objectives can be used with U-DICTS but not U-DICT, just to make things funnier).

To my defense I can only say that I received the microscope with UPlanApo 40x objective and U-DP40 prism and assumed it was OK to use them together, but this is not the case. I am now waiting for a U-DPA40 prism for the UPlanApo 40x, and will go on from there. Curiously, there seems to be no U-DPA10 prism and both UPlanFL 10x and U-PlanApo 10x are instead supposed to be used with U-DP10 (which I already have, so at least I don't need to change everything).

There is in this case no substitute for the Olympus documentation, and any guesswork is likely to be an expensive mistake.

PS - I did notice that the pictures after being reduced to 1/4 their original size look a little fuzzy. So I took again a picture with U-DPA20 with the condenser diaphragm closed almost all the way to NA 0.2. The objective is NA 0.7, but at this small image size the image gets actually visually sharper at NA 0.2, I guess because the higher DOF brings more details into focus in this particularly thick subject - I still have much to learn. 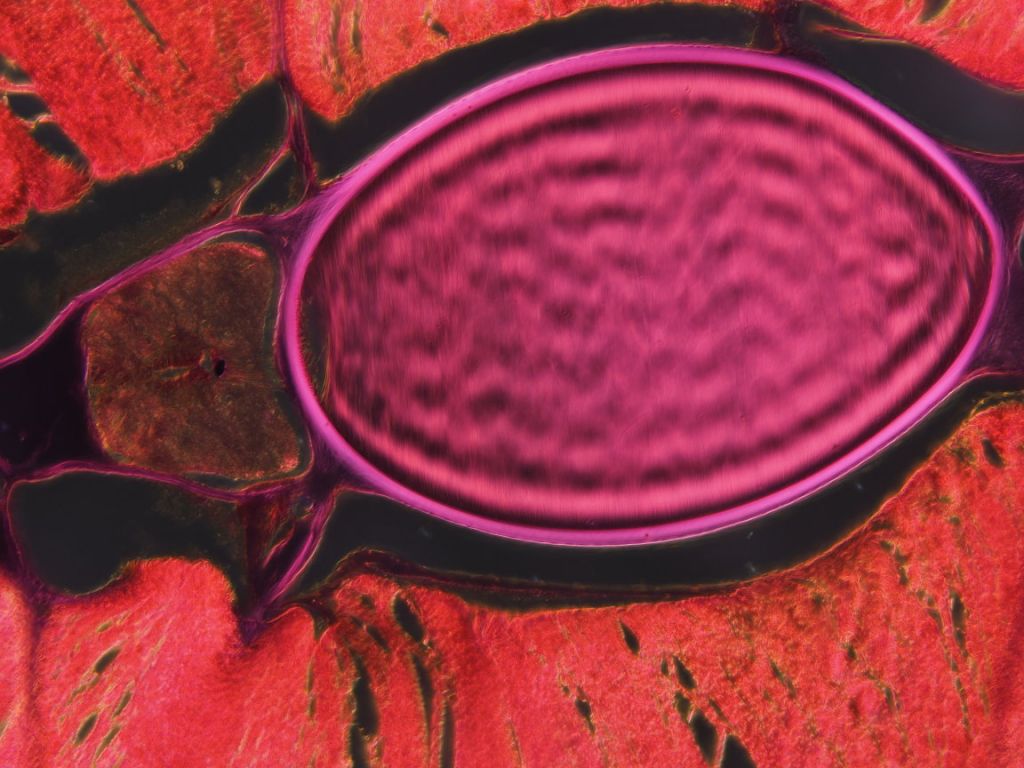 Enrico, glad that it ended useful

Yep, it isn't, although it shows a difference. A fresh thin sample will be better.

...but at this small image size the image gets actually visually sharper at NA 0.2, I guess because the higher DOF brings more details into focus in this particularly thick subject