Or, the Bratcam gets a camera clamp.

Even in otherwise solid macro rigs, the camera’s bayonet mount may remain a weak link. On the camera bodies I’ve used, the lens mounts have all permitted a small amount of movement, especially rotation. So I wanted to make something that would fix the camera solidly in place. I wanted the device to be quickly removable and adjustable to fit any camera. This is because I use more than one camera, expect to replace cameras in the future, and sometimes offer to let other photographers try my rig with their cameras.

But how? The adjustability requirement seemed difficult, as adjustment ranges need to be available in numerous axes. I’ll admit to considerable head-scratching; I thought through a few designs that were more complicated than I liked, until eventually, a simple arrangement did come to mind. And as so often happens, once the idea was in my head, I thought, “That’s obvious! Why did it take me so long?”

The approach will soon be obvious to everyone who reads the rest of this thread. But I’d be interested to know something, if anyone will play along: Consider pausing right now and sketching out a design before reading further. Was it obvious to you? Maybe I’m just thick.

Having built and upgraded the Bratcam’s Mitutoyo MT-1 tube lens assembly, I’ve found it to work very well. But in some stacks, I’d see small, random rotations, first one way and then the other, in a few of the images. This was clearly caused by the camera moving around the bayonet mount. Zerene Stacker can easily correct for rotation, but at 10x and above, I usually turn the alignment options off. Besides, unwanted movement strikes me as poor craft.

Also, it was possible to tip the camera up and down or side to side with a bit of finger pressure. Although no one is likely to do this on purpose during a stack, I saw evidence of its happening on its own, when I changed objectives, even though I was careful not to touch the camera. While not a huge problem, I found this annoying—especially as I often do comparison tests between objectives, and want the field of view to remain as well-registered as possible.

So I added the camera clamp I’ll describe below, and after much use, can report that it works wonderfully. I can treat the camera, tube lens, and objective as a single mechanical unit, with rigidity resembling that of a crowbar.

Let’s start by noting that all my cameras have an Arca-style L-bracket attached, such as the one below. These brackets add so much convenience that I can’t imagine using a camera without one. I’ve often wondered why camera makers don’t simply machine these dovetail grooves into the camera bodies. This particular L-bracket can be turned into a bottom bracket, by removing the left side via the two hex screws. A bottom bracket would also work fine for this implementation. 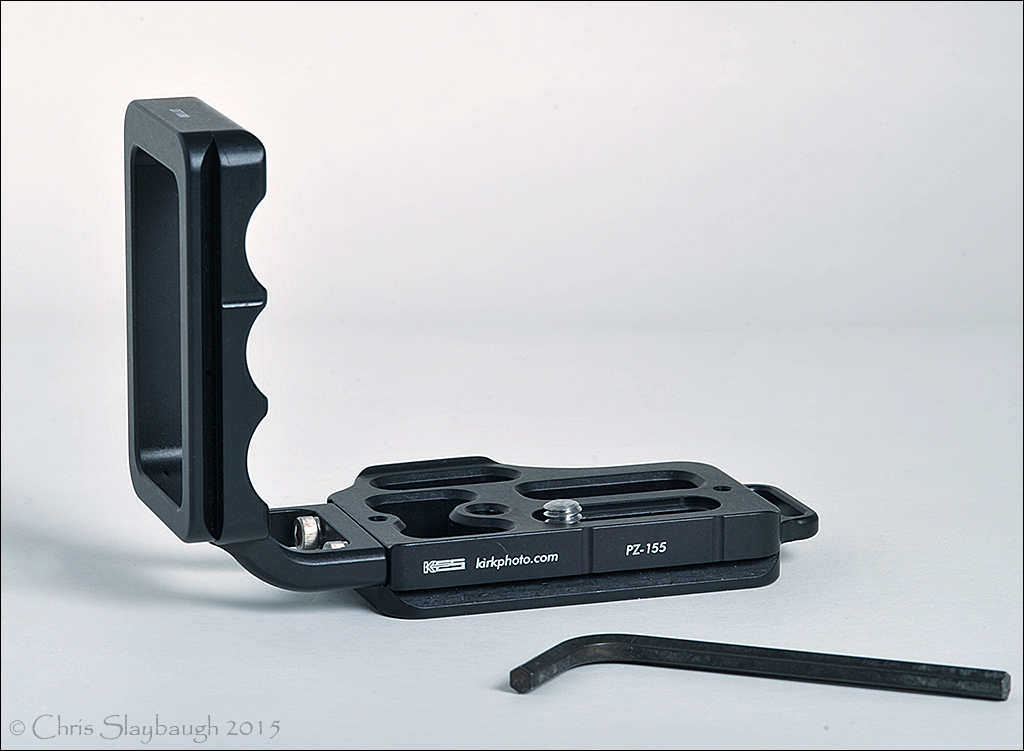 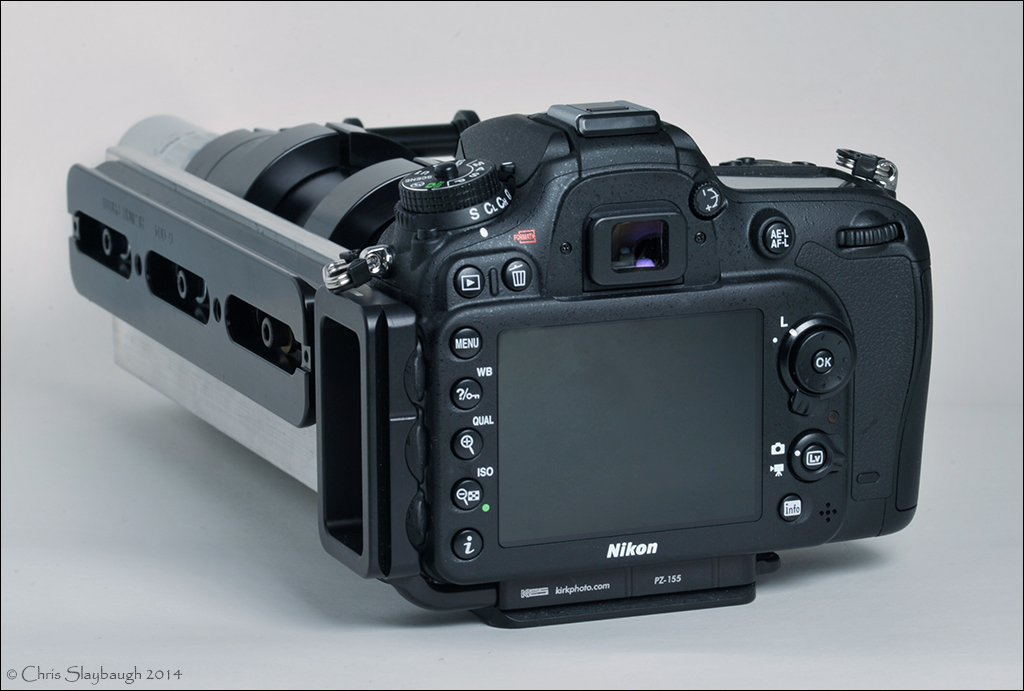 Basics out of the way, here is the camera clamp, in use, fixing Arca-style L-bracket on the camera solidly to the Arca-style rail on the tube lens. I’ve removed some cords for simplicity, but left the sighting laser in place:

Close-up of the camera clamp: 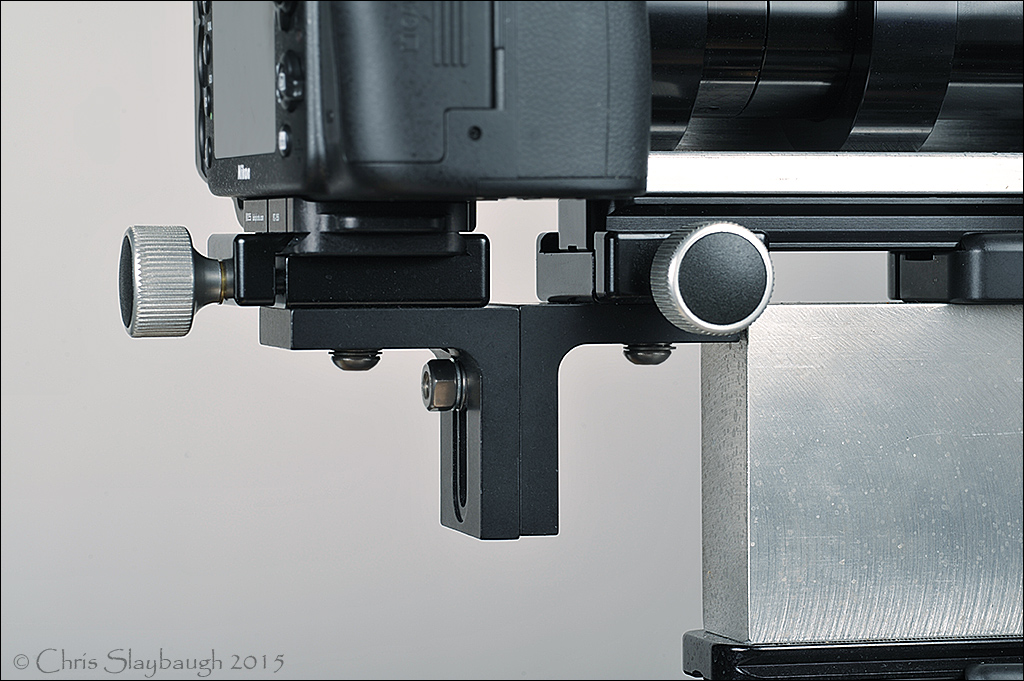 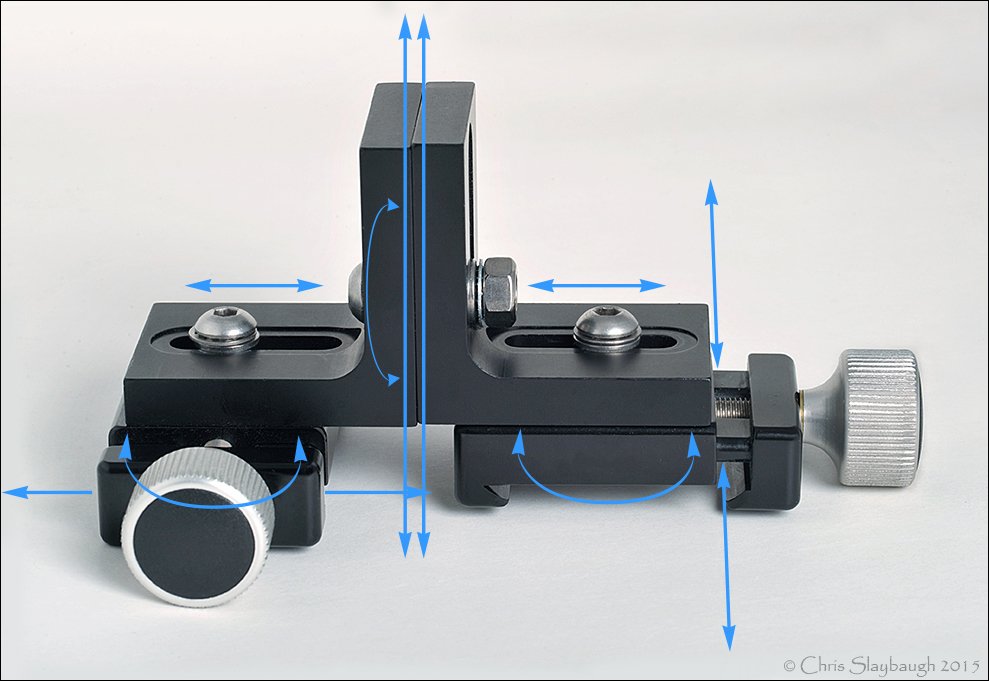 Setting this clamp for a new camera is simple. I recommend: A different view, with parts list beneath: 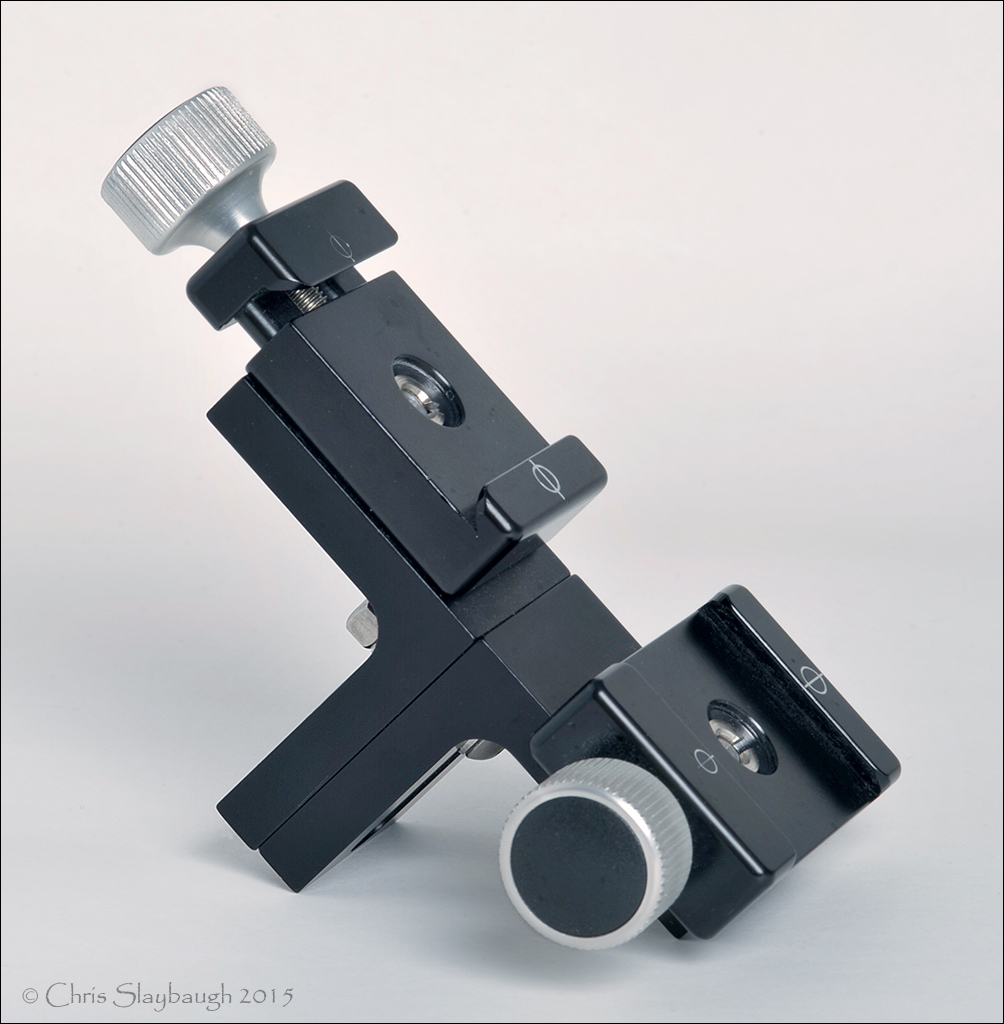 In case I ever need extra space between the right-angle brackets, I also picked up a Thorlabs RM1F 1-inch construction cube with ¼-20 tapped holes. $20

Thorlabs’ image of the construction cube: 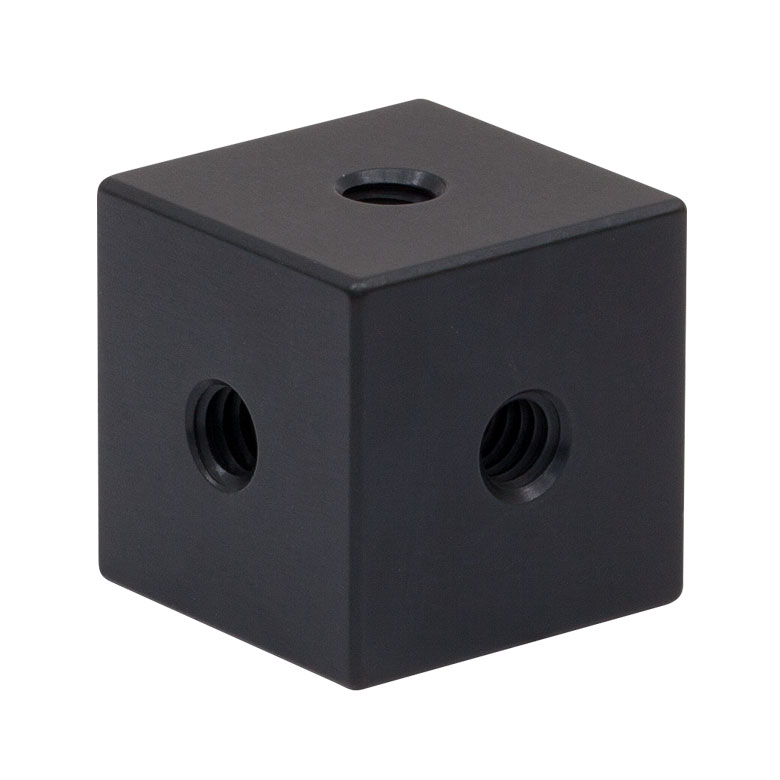 This clamp cost me about $150, but one could make a similar clamp for under $25, using the recent crop of cheap eBay Arca-style clamps, and hardware-store right-angle aluminum stock, with a bit of cutting, drilling and filing. Aluminum stock is easy to work with hand tools. To make slots in the right angle stock, consider drilling a hole at each end of the desired slot, and cutting between them with a rod blade on your hacksaw. If you go this route, also check out any right-angle brackets your hardware store has on hand (they are used for tasks such as making strong corners on wood projects, and repairing things like chairs and mailbox posts). There is a good chance you'll find inexpensive right angle brackets that work right out of the package.

When I built this clamp, the current crop of very inexpensive Arca-style clamps had not yet appeared on eBay. Some of these cost around $6, compared with the $45 I paid for the Hejnar clamps. Are they as good? I have no idea. But I have no regrets about paying for the components I used. I expect to be using this clamp for many years to come. It reduces frustration in making images, and increases predictability and repeatability of the results.

This is mostly because of some small rotations you said. Do you think that a rubber band or maybe coil spring attached from the camera to around the tube/lens to provide constant torque would also solve this problem?
-Steven
Flickr Macro Rig Control Software
Top

Yes, preloading with something stretchy definitely works well against random rotation. I used a piece of surgical tubing this way for several months before assembling the clamp.

I do much prefer the clamp, though, and would not go back. The clamp is a more convenient solution, and the camera's slight vertical and horizontal wiggle room are nice to rid of, even if they didn't cause huge problems.