Integrating a Mitutoyo tube lens in a macro rig

Hmm. How to explain.

As you have pointed out with these lenses, and at rated tube length, the resolution presented to the sensor is 10um.

Now you are advocating oversampling on the grounds that anything less will result in less resolution than the objective is capable of. A fair argument if that was the intention.

However that argument is intended for high magnification microscopy where the ultimate resolution is required, and field width a lesser issue.

Low magnification photomacroscopy is a different matter. Here we are not limited by resolution alone but by the best resolution that we can get at a particular field width - the length of our bug.

Ok. That sets the conditions. So how to get the best result? Well, as I am sure you have noticed, in the range we are mostly interested in NA tends to be inversely proportional to maximum field width. So it follows that to get the highest NA we need to chose an objective that has just enough field width, and run it with as short a tube length as we need and can get away with.

But is there any advantage if the sensor pixels are too big? Take a deep breath. There are 2 concepts here. Empty magnification and empty reduction.

Empty reduction is the other way. It is the point where less magnification won't give you a sharper picture because nearly all the observed blur is due to the sensor & anti alias filter. That is going to happen at about when the sensor out performs the objective by 3x.

Actually, with the sorts of cameras we generally use it is never going to happen. Lets take an example. 100mm tube lens will give a resolution size of about 5um, and a middling quality cropped sensor camera will have pixels of about the same. The effective aperture is about f/9. However in this case blur due to sensor & objective will be roughly the same. It would need a tube lens of under 50mm before nearly all the blur was from the sensor but there is no point in trying because the objectives we use just don't have that much field width.

To show you exactly what is going on this might help.

Go down to the chart labeled diffraction effects. To compare remember that the absolute shortest tube lens that will give some sort of corners is 135mm for full frame or 90mm cropped. That is equivalent to f/12 and f/8.
Last edited by Blame on Fri Feb 11, 2011 12:55 pm, edited 1 time in total.
Top

Craig Gerard wrote:This seems like an appropriate place to ask this question. It has been raised before, but I can't find the thread.

The Mitutoyo QV objectives are designated f=100, is there a Mitutoyo 100mm tube lense out there?

Unfortunately 'somewhere' is inside a precision optical workstation for the industrial CNC sector.
Top

ChrisLilley wrote:Somewhere there is a turret with parfocal 100, 200 and 600mm lenses in it.

Page 8 of the linked PDF.

This made me curious about the other item I purchased which should arrive early next week. It just landed in Australia. (it's for a comparator not a CNC but worth a closer look. If you find this item on eBay, please note I paid substantially less than the listed price).


Craig
To use a classic quote from 'Antz' - "I almost know exactly what I'm doing!"
Top

Blame wrote: ...But is there any advantage if the sensor pixels are too big? ...

There is a disadvantage when they are too big in relation to the resolution of the optics: They cannot resolve what the optics are delivering to them. That means undersampling.
The reason for increasing the N.A. is to increase the resolution. You pay a high price for this, especially regarding to the depth of field. Taking a high N.A. lens and don't use the resolution, is not a good deal. This doesn't necessarily mean you can't take pretty pictures with it. But it means you are wasting the main advantage of the high N.A. lens (xy resolution), trading it in for a big disadvantage of this lens - overproportional decreased resolution in the z-axis.
Take a look at the relation between resolution and deph of field: 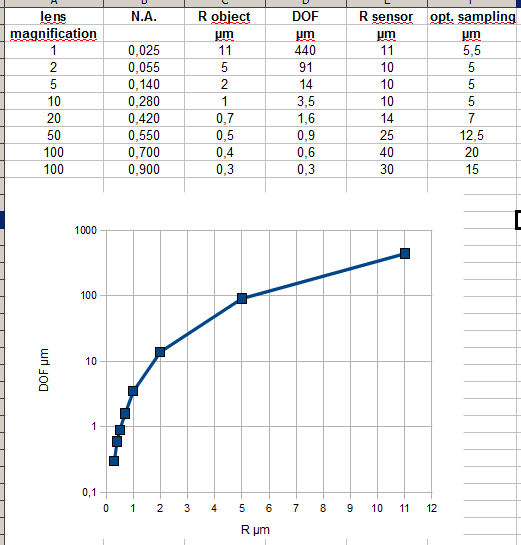 Blame wrote: ...However that argument is intended for high magnification microscopy where the ultimate resolution is required, and field width a lesser issue....

High magnification microscopy is the last thing that requires a high resolution sensor. As you can see in the table above, even for the 100/0,9 HR lens a sensor with 15µm pixels is adequate.
That means to get the most out of an 100/0,9 lens with an image circle of 30 mm a quadratic sensor with approx. 22x22 mm and 2 Mpix can do the job. Everything more is useless. What it costs to make lenses with high N.A. and (relative) low magnification and large field shows a look at the prices of the HR lenses - thats disillusionating.

But please don't misunderstand me - I don't wan't to spoil the fun in any way. We are talking about a hobby, and everybody may have personal priorities and different approaches and thats fine.

But you made a conclusion and didn`t show any proof of it, nor did you give a reliable explanation :

Instead there are systematical errors in the way you came to this judgement.

I don't see this as a competition.
Chris wanted to share his thoughts about a particular setup. I'm not selling Mitutoyo lenses and don't want to recommend them over another setup, especially not if it is possible to save money.

I've probably seen those "optimum sampling" figures some time before but it was very interesting seeing them again.

Horst, if you can show us a sample image from the Mitutoyo tube lens at some point it would be greatly appreciated! Preferably one showing detail across the frame and preferably on a FF sensor but I take what I can get!
John Hallmén
http://johnhallmen.se
http://flickr.com/johnhallmen
Top

I will make some basic tests in the next days.
This will include an alternative infinity lens with slightly shorter focal length.
To be honest, I'm uncertain at the moment which way to go.
The MT-1 would give very nice possibilities as Chris S already mentioned.
Unfortunately it turned out that Christian (typestar) and I have the same lens (MT4), otherwise it would have been possible to swap equipment, as we are living very close.

Finally some test images with the MT4.
Two different cameras were used: The Canon 5DII with 21Mpix on a 24x36mm sensor and the Olympus E-30 with 12 Mpix on a 13x17mm sensor.
Test object is a grid with 1mm distance lines, printed with a laser printer on a self adhesive plastic label. I have glued this label to a glass object slide to keep it flat. It should have been bright white, but under the microscope it turned out that it is sprinkled with colored dots.
This are single images, no stacking.
The camera jpg's are unmodified except some slight contrast adjustment. No additional sharpening or CA removal.
Light came from two sides (not diffused) under approx. 45 degree angle provided by a halogen cold light source.
Objectives are the Mitutoyo MPlan Apo's 2x/5x/20x.
I did my best to keep the test object flat and in right angle to the optical axis, however it is difficult in praxis to get it really right as the field is wide and DOF very small. So forgive me if there are small errors in the setup (DOF of the 20x lens seems to be already smaller than the height of the ink-droplets).

The file names include the name of the camera (5DII/E30) the objective (MMPA2/5/20), the tube lens (MT4), the light (dir=direct), jpeg-treatment (cc=contrast corrected) and the corresponding raw-file number for the 5D-files.
Focusing was done in the live view mode to the center of field. The 5DII was used in liveview silent mode and the e-30 with mirror -lockup.

Here is an overview in thumbnail-size: 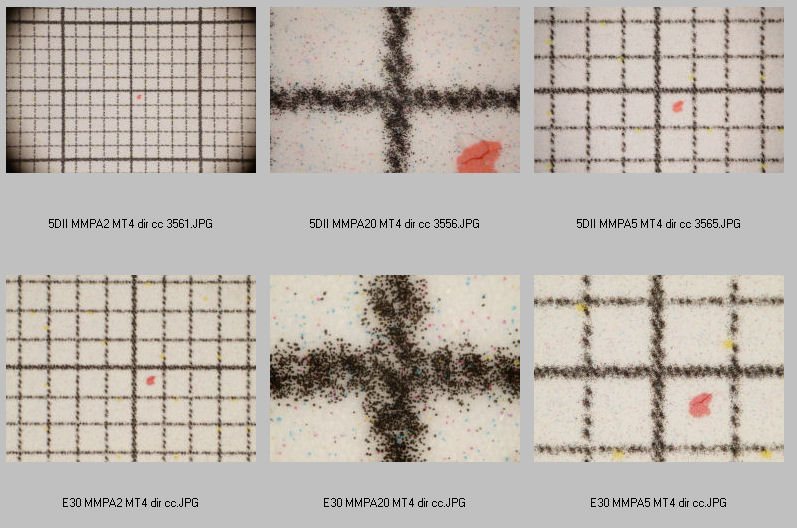 Fascinating. What's your "take" on these, Horstl?
I'm a little surprised at the pincushion distortion, but I suppose it isn't a major problem in general microscopy.
I'm impressed at the field coverage

I'm wondering about the lateral CA showing around the dark spots. Am I being too picky? Would a camera lens improve on that..?

I think your yellow has a problem!
Top

ChrisR wrote:....
I'm wondering about the lateral CA showing around the dark spots. Am I being too picky? Would a camera lens improve on that..?
....

From my experience so far I would say that there is not a general rule. Every lens is a bit different and every combination behaves different.
Not to forget the influence of magnification and pixel size.
The E-30 combined with the 200mm tube lens is bringing these optics to their theoretical limit. This combination forgives really nothing. I have tried it also with a very high resolution camera (1,7µm pixel size black/white sensor) and only in the blue channel it is possible to squeeze out a bit more information, the red channel is already the limiting factor.