Another Ant from Costa Rica

Another Ant from Costa Rica

These ants always remind me of the bulldog ants of Australia I have seen on TV. They do show a stinger so I do give them careful handeling. Just under 1cm long and the head is 2mm wide. I am thinking Genus Odontomachus. http://pick5.pick.uga.edu/mp/20q?search ... chus+bauri
Also, if any of the ant specialists in the forums can give Me a lead on the ID of the leafcutter I posted here http://www.photomacrography.net/forum/v ... php?t=5791
I would love to be able to put a name on the picture. 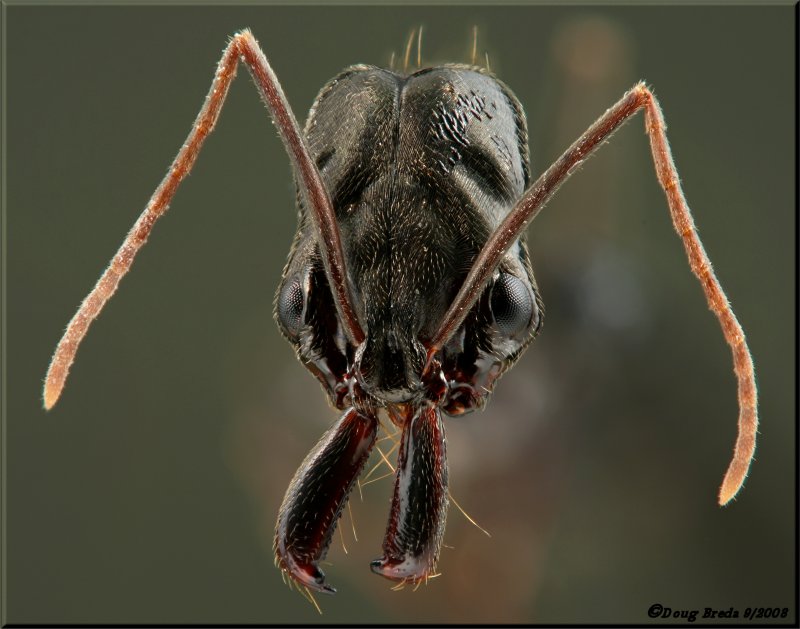 It reminds me also to a trap jaw ant, as you identified. We don't have it in Europe I only read about them. It keeps its mandibles open when hunting and can snap its mandible with a very fast movement. In fact it has the fastest bite on the earth. The closing of the mandibles are triggered with the long hairs at the center.
I did not know the leaf cutters very well, I was not even ID the ones I photographed once in Mexico. I have a vague guess that it is some Atta species.
Péter
Top

That is really cool looking ant, it's like it has a very large brain due to the shape.

A little critique if I may. I'm no expert or anything but I do find it disorienting when looking at your stack heads. There's no falloff between the area in focus and out of focus, giving that disembodied floating head look. You probably just want to show the antenna and if that's the case, perhaps you can try a deeper stack? doesn't have to be totally in focus, just enough to give an impression that the head is attached to a body.
Top

Very nice photo of a beauty of an ant. (Well, other people may disagree about the ant´s beauty, though

Yeah Doug, looks like Odontomachus, the similar genus occuring also in CR is Anochetus but the latter hasn´t such a well defined groove in the middle of the vertex. To be absolutely sure, look on the back of the head, there, on an Odontomachus, you should find lines forming a Y (or, of course, turned upside down Y, depending on the direction from which you look

)
As to the species, there are a few black O. spp. in CR, hence it would need closer examination to see if it´s bauri or another.
I have also identified my Odontomachus just to the genus so far.
As Péter mentioned these are trap-jaw hunters. The huge muscles for the trap mandibles give the head its peculiar shape. The movement of the snapping mandibles is one of the fastest movements recorded in animals.
Péter, Anochetus is actually recorded from Spain.

As to your attine over in the other thread, Doug, it would need a lateral view to check whether it´s Atta, Acromyrmex or maybe Trachymyrmex.

Now, I should really get going and dig out some ants from my "preserves" for some shots before you and Péter are done with all of 'em.

Thanks you all for the great information on the ant and the C&C. I can see the point about the floating head. I do try looking at them from different angles and I think because of the head being so large on both this and the leafcutter (both heads were actually bigger than the thorax and the abdomen on the specimen) it was hard to get any of the body included into the headshot.
Take Nothing but Pictures--Leave Nothing but Footprints.
Doug Breda
Top
Post Reply Previous topicNext topic
5 posts • Page 1 of 1