I've been working on my stacking technique, playing with lighting etc before taking the plunge into creating full object movies. I'd appreciate feedback on this image, not in terms of artistic merit but technically, obviously a dust would make it look better. 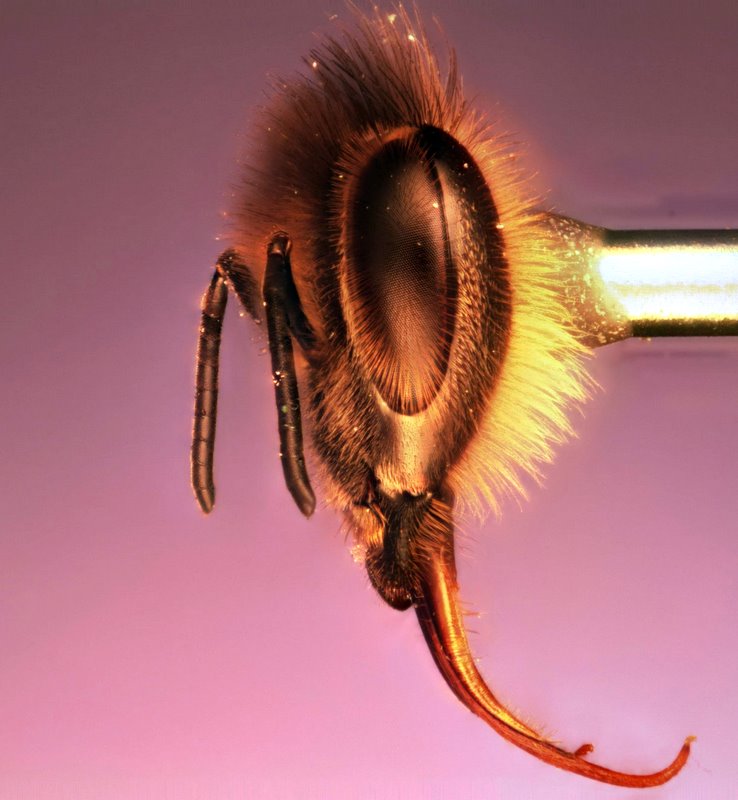 Looks technically good to me. Did you aim for the slight diagonal gradient backdrop? That bee's been on a serious diet!

It's not an aesthetically pleasing look, bee head on a stick is it

The backdrop was just a piece of paper taken from the back of a brochure that seemed a nice colour. Originally I had a black backdrop which is what I will have to use for the object movie but it was hard to compare my results with others. Any gradient is purely accidental, probably because the paper is just lit by stray light from the fibers.

I've stopped down the aperture and have created the image below with a larger step, still looks OK. 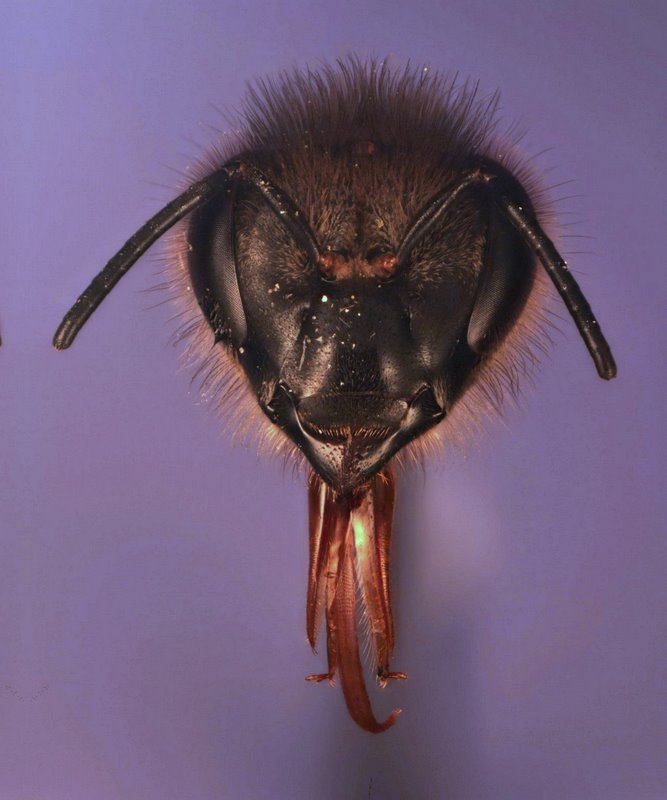 First is that you're on the right track to consider & test smaller apertures. Of course if you go too far you'll lose too much resolution. But smaller apertures seem to give fewer problems with stacking artifacts such as halo and bogus transparency. There's a complicated interaction between subject, lighting, lens, software, and what you want to see. So, it's a good idea to poke around a bit outside the bounds of what theory and other people's work would predict is "best".

Second is that your lighting still looks a bit too directional. Two issues there. First, I'm having trouble seeing detail in many of the dark areas, even though I can tell from the histogram that they're not actually going black. 2) I'm pretty sure that if you generate stereo pairs with this lighting, they're going to show distracting differences due to specular reflections moving as the angles of reflection change. Both effects should be reduced by more diffuse illumination.

Ah, just realized, "black background". For that case, you may also want to shine in some light from as far behind as you can get it. That will provide some glancing reflections from the edges of your subject, helping to separate it from the background.

Hope this helps. I'm looking forward to seeing some of your object movies from this new rig.

Well firstly I actually have no interest in the head but it is something that is good for comparison against other people's work (I shudder to think what I thought looked good before coming to this forum) and it has lots of challenging features like the long antennae. My main interest will be looking at the wing base, both whole and dissected and at the parts that make it up.

I think you are spot on with the comments on the lighting, I'm using a ping pong ball but in order to get enough light on the subject I am having to put the fibers quite close, I end up with two fairly diffuse but rather spot like sources. I am thinking that something like Laurie's diffuser tubes might work well from a material that is highly diffuse but lets plenty of light through, I have to include a slot for the tilting action of the rig but that is not too much of a problem.

Of course I should not expect to be able to get sets of 64+ gallery quality images in my object movies but I'm starting to think it might be doable to get sets of pretty nice images, illumination will have to be a compromise over the various views.

Well I just had a bit of an experiment, I cut a pingpong ball in half and then put a hole in the top of each. They then formed a sphere around the object except for the hole for imaging and to provide for a black background. This also meant that the fibres when further away hit had more diffuser to hit to I got more light, it at least provides the back lighting required but I still need some more experimentation. 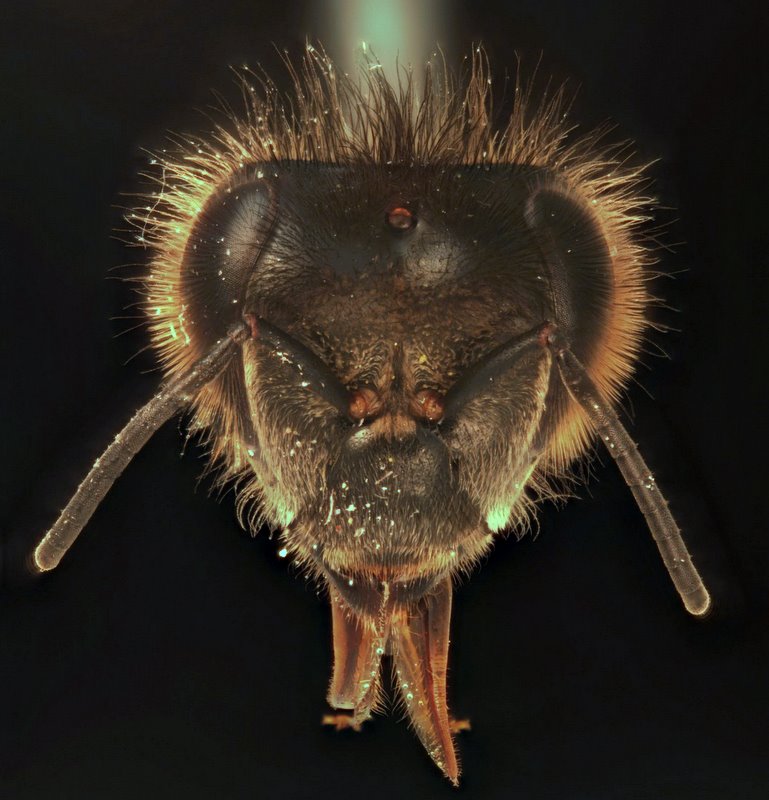 I think the first two are more aesthetically pleasing, but almost certainly can see more detail in the last.

I suspect you're going to want to see maximum detail when doing the serious work, but it looks like some small tweaks to the diffusion setup and you can use the same rig for arty shots as well!!

Mind you, the middle shot of the three, I first looked at while at work, I thought it was a bit too dark. Now I'm home on a much better screen, yes it is still a tad dark, but not badly too dark, I can see quite a lot of detail, and I'd be very surprised if at full res with a bright monitor you couldn't see the detail you want in that...
Top

Well now, this is striking!

Looking at images 2 and 3, I would think these were two completely different critters. In image 3, the whole face is obviously covered in fine hairs, but in image 2, the lower part of the face appears to be almost naked.

Are these really the same specimen?

But on this last shot the hairs on the top of the head are not as visible as on the second. I think that aspect might have more to do with the particular piece of face which is pointing directly towards the camera.

I've noticed this particularly with fly eyes, specifically the little long legged flies, which actually have a little hair in between each and every facet. But in the piece of eye facing at the camera these just disappear due to the hairs being just a spot as they face the camera. At the edge of the eye you can clearly see them and they gradually fade from clearly visible to invisible...

Mind you having said that, the hairs we can see on the bottom of the face in shot 3 do not appear as if they should be facing the camera in shot 2 so perhaps it's a different effect?

Graham can you post a shot of your lighting setup for these so I can try to get my head around what's going on with this light!!

Ahh I think I just worked it out, it looks like the light is coming in from top right and top left in the last shot. In shot 2 it appears to be coming in from bottom right and left.. (or you shot it upside down?)

In which case I think it's a mixture of the effect I mentioned above together with a similar effect of the angle the light is hitting the subject being similar to the angle the hair leaves the subject. I think you need light going across something to define it better... (Like using evening sun as side lighting to bring out textures in stone walls etc)
Top

They are indeed the same specimen, I'll try and get a photo of the set-up tomorrow. It may be a bit confusing because in the last shot I rotated the insect to get a look at the top of the head and to do that it may have ended up inverted. My camera is at 90 degrees to the bench to start with due to cabling issues so it can get confusing.

I think your analysis is probably correct, I've got sort of reverse dark field illumination.

) but because the arm of the movie rig ends up beneath the sample it makes it tricky to configure. At the moment everything is covered in flock.

I'm in a bit of a rush, heading off for the weekend so please forgive so many images at once.

Terrible pictures showing the diffuser, sorry my bulb just blew so I could not even turn the illumination on.

A crop from a further attempt. 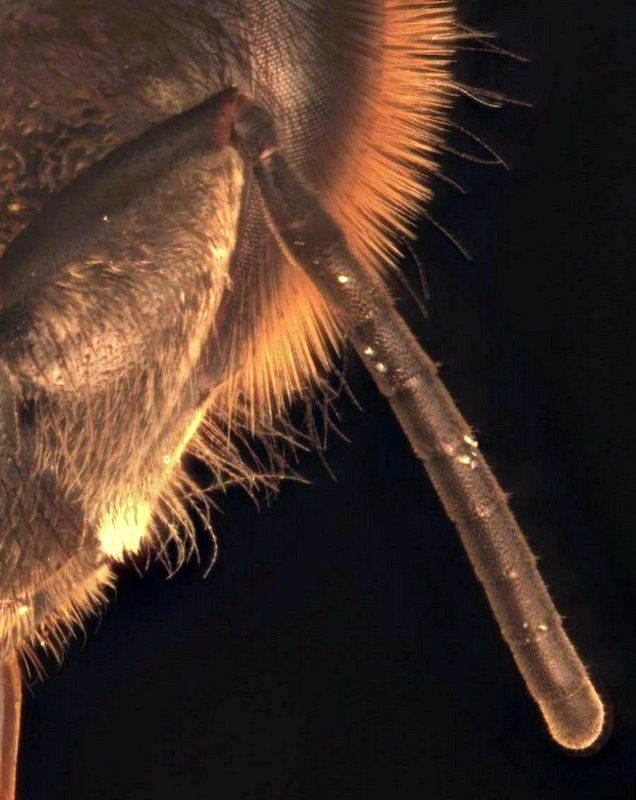 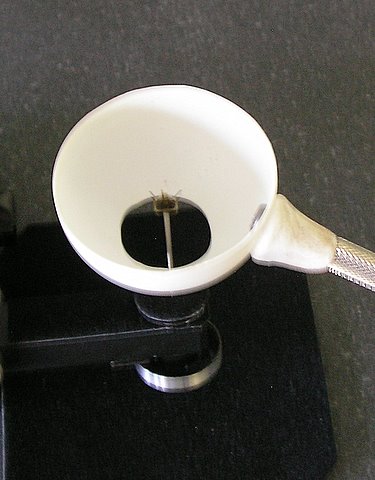 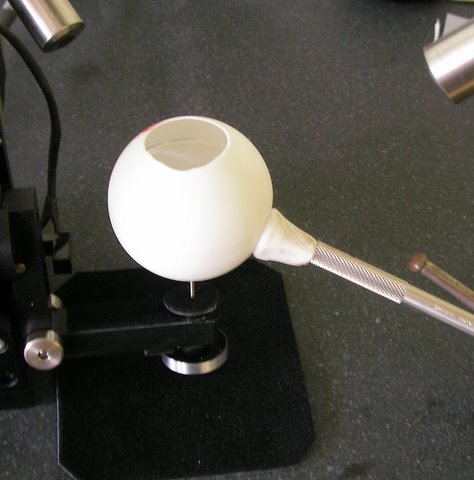 Far from perfect but it gives some idea of a small image matrix, I'm not sure why it didn't end up even in terms of rotation. 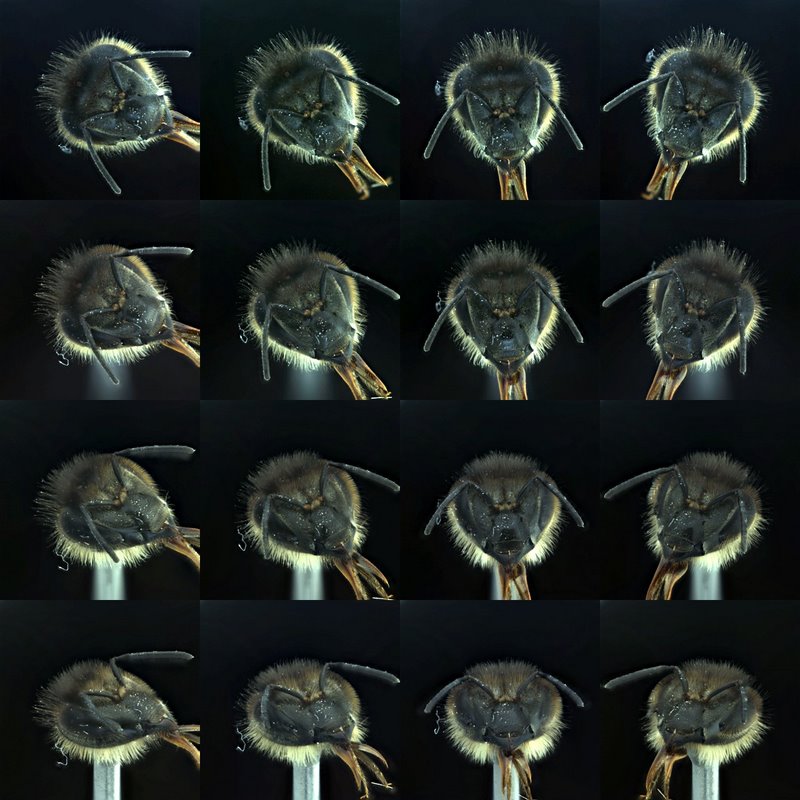