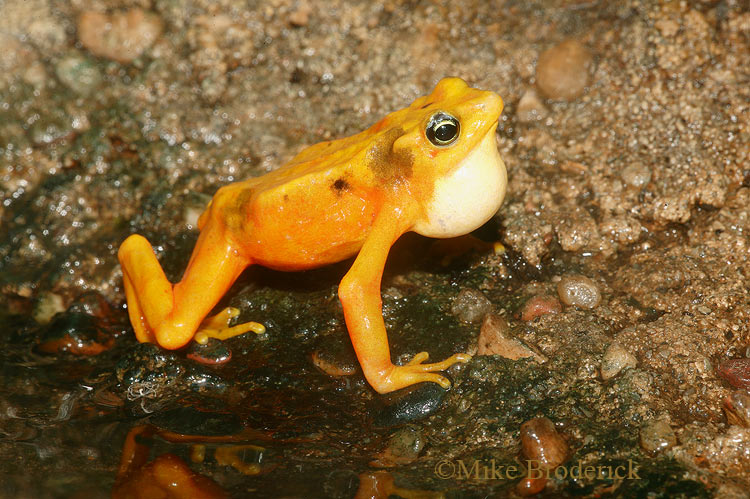 I posted this image briefly last night, then decided it was overexposed, so I deleted the post and am posting a slightly different edit today. This is a Panamanian Golden Frog, which are slightly poisonous, but are now thought to be extinct in the wild. Oddly enough, it isn't habitat destruction (by humans) that is the culprit, as I'd thought, but a wildly contagious fungus. The remaining specimens of these were captured and put in zoos until some solution can be found.

Despite the popular name, these are actually a form of toad, not a frog. This zoo specimen was feeling really good, and decided he had to sing his joy. I was there to capture the moment.

Rik commented on the odd little halos on the specular reflections in the background. This was shot with a conventional 180mm macro lens, and I'm not sure of the source of the odd donut-shaped reflections, which I usually associate with either a mirror lens or one of Canon's super-expensive DO lenses.

Nice shot of a lovely creature!

I remember a few months ago watching David Attenborough's latest series 'life of reptiles' - he was lucky enough to go see the last of these in the wild before they were rounded up... Such a shame, hopefully something can be done about the fungal problem!
Top
Post Reply Previous topicNext topic
2 posts • Page 1 of 1