Rik,
I was having a conversation with a friend who is interested in image processing and mentioned that Zerene Stacker can apparently create stereo images.
It does this by shifting each layer a defined number of pixels relative to previous layer.
He asked how this was possible if you cannot see 'around' an in-focus pixel.
That reminded me of a discussion I had (maybe on Photo3D forum) many years ago before Zerene stacker was introduced.
I asked the same question and received an anonymous email that simply said "actually you can see around the pixel".
Some time later it occurred to me that the email may have been from yourself.

If stereo can also be achieved with a telecentric lens, how do you explain that ?

I asked the same question and received an anonymous email that simply said "actually you can see around the pixel".

That email was not from me. It's well known that I am not capable of writing short explanations.

He asked how this was possible if you cannot see 'around' an in-focus pixel.

The explanation lies in the fact that all lenses have entrance cones with a finite width.

Suppose you have some background that is logically hidden behind some opaque foreground, and you're focused on the background. Then at the point where the chief ray of that entrance cone is exactly at an edge of the foreground object, half of the entrance cone contributes an unobstructed view of the background, while the other half contributes an out-of-focus image of the foreground. This is why background is always contaminated next to foreground. It is an unavoidable cause of halo in some scenes, a situation that I have earlier diagrammed something like this:

But of course what the original stack contains is a sharp but limited and contaminated view of background, plus a sharp and uncontaminated view of foreground, with the background blurred. When these two frames are shifted relative to each other, and the shifted versions are then stacked, the result comes out something like this: 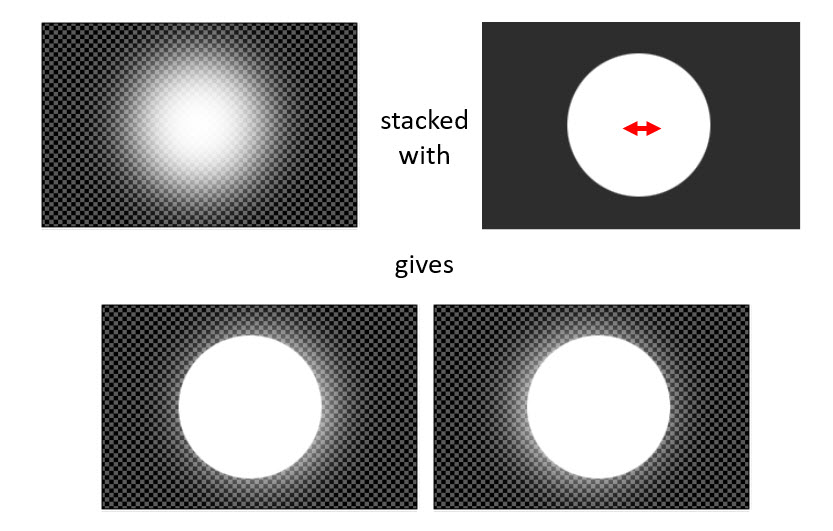 Of course I have diagrammed the perfect case, where the stacking software correctly manages to show only the foreground object where foreground is sharp. In practice, it is pretty common for the "transparent foreground" artifact to appear, particularly in regions where things have shifted so as to put less contaminated and therefore more contrasty background "behind" what should be an opaque foreground object.


If stereo can also be achieved with a telecentric lens, how do you explain that ?

Telecentric lenses are distinguished from ordinary lenses only in that all their entrance cones are oriented parallel to the optical axis. The diagrams above might represent either a telecentric lens or an ordinary one. We can't tell without seeing whether other cones are or are not parallel to the one that I've diagrammed. If the outer cones happened to be tipped outward, as with an ordinary lens, then some details of how foreground and background "line up" would be changed, but the essence of the shift-and-stack process would be just the same.

Sometimes I summarize by saying that synthetic stereo works well whenever both views fit much within the entrance cone of the original shooting.

This is why synthetic stereo works so well with microscope objectives. 10X NA 0.25 has an entrance cone width of almost 29 degrees, and even 4X NA 0.10 has almost 11.5 degrees. Given such wide entrance cones, stereo rendered at say 6 degrees total disparity fits well within the original entrance cones, and then synthetic stereo does not introduce edge effects that are much more severe than the usual ones with transparent foreground.

Yes,thanks, but I had better bookmark for future reference.

My microscopes are put away right now, so I cannot play with this myself.

But I think what's going on is that you're positioning the eyepieces so that predominantly the right half of the exit pupil enters one eye, while predominantly the left half of the exit pupil enters the other eye. Both exit pupils correspond to the entrance pupil of the objective, so the effect is as you describe except that the eyepieces are both receiving a full non-stereo view, while each eye only gets a left/right half.

It's an interesting approach, one that I had not thought about before.

The classic way to do stereo through a compound scope is by using a split polarizer in the illumination path, each half orthogonal to the other, then using matching polarizers in the viewing path.