scratch that, I have just realized there is no external trigger input as I thought I had been promised. Arrgh!

Sorry to turn this in to a soap opera. It was the wrong camera in the right box so it has been sent back and hopefully a new one is being sent from Canada ASAP.

Mechanics for the automation are done and I am really really pleased with them. I will try to post some pics sometime if I'm allowed. Next is a little electronics and some programming but I've done it all before so it should be straight forward.

Truth be told, I'm rather enjoying the soap opera.

I'm sorry to see these things happen to other people, but I'm glad they're not happening to me --- this time.

Please continue keeping us informed. Pics will be most welcome!

Yep, same here. Watching this one with popcorn ready Graham.

Well off for black anodising and then photos

Well it is back from anodizing (matt black and looks awesome) but it will be a while before pictures because I want to get the wiring sorted out neatly first, I spent an extraordinary amount of money on a mere 5m of 3M flexible ribbon cable.

I'm doing the programming now and have most of the basic functions done, I can move the axes to generally check out the object, set step sizes and ranges of angle and focus so now I just need to write the nested loops that do the experiment. I am also waiting for optical home switches which will be my way of dealing with potential back lash issues and will prevent it from trying to destroy itself.

This afternoon I drilled holes into the side of my granite surface plate, I am amazed how well it worked out, two 10mm diameter 40mm deep holes and they seem to line up well with the enlarger head. Next the stainless inserts I had made will be glued in. I do have pictures of this process so will post them when I get home.

When programming the part of the program that allows the setting of step sizes I realized that potentially this process could produce extrodinarily large amounts of data, if you have m azimuthal positions and n elevation positions and o images in each stack that is n*m*o images. Even for fairly modest numbers of angles and images in the stack it gets pretty big. For this reason I think it would be good to automate the process of processing the stack so that the original images can be deleted reducing the amount of data and mouse clicks for me. I think tufuse might come to the rescue here because at the PC end it is possible to run command line programs from within other programs fairly easily I seem to remember. If anyone else has any ideas I'm all ears.
Last edited by Graham Stabler on Wed May 21, 2008 2:28 pm, edited 1 time in total.
Top

It's "fun" watching this come together!

That's going to be a lot of stacking! If you use Tufuse for the stacking software you might even get one or two subjects done in your lifetime (as long as you are a very young man!)

So here are the pictures, I'm sorry but it's camera phone quality. The first shows how I drilled the granite surface plate, I bought possibly the cheapest drill stand money could buy and a 10mm ceramic drill. A hole was drilled through the base of the drill stand to allow it to drill into the surface beneath it. The hole positions were marked and the stand clamped to the granite plate with a sash clamp. With plenty of water as lubricant I was able to make deep starter holes in the correct places which were then finished holding the drill in my hands. 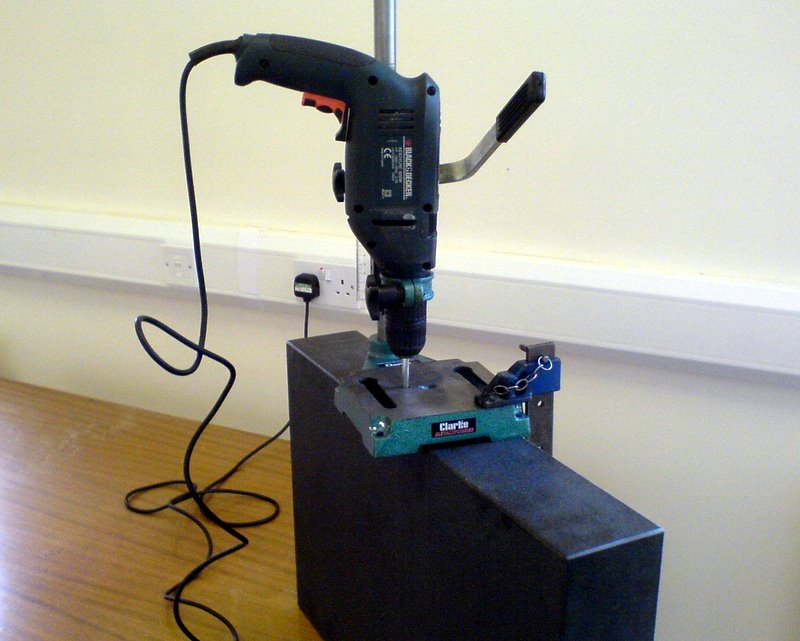 The inserts in place but not drilled, they are threaded on the inside and outside, the latter is to provide a key for the resin/cement that will be used to glue them in place. 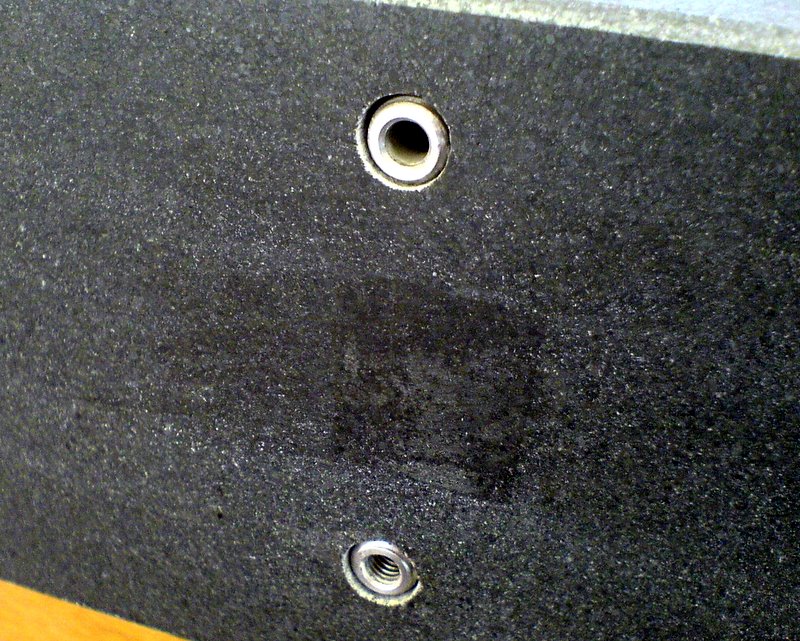 Glad to be a source of "amusement"

The object movie rig is very close to completion, and things are looking pretty good, I took my first non stacked movie last night semi-manually (the motors did the work but I told them where to move and triggered the camera myself). It is exceptionally boring and not even well lit but it's nice to see.

I have a flash file showing the movie but have no way to upload it at the moment, any suggestions?

Hi Graham,
You could link to the flash movie if it is embedded in an external HTML file.

Otherwise, I'll send you a PM with my email address. You can email the Flash movie (swf) through to me and I will embed into a HTML document and upload a link in a follow-up post.

It's an swf, I'll upload it to my own webspace, probably easiest, thanks.
Top

It is pretty poor but I hope gives the idea. The shaft is 1mm accross the sample is the stuff used to stick posters up with. There is some text, this just says it is a trial version of the software I used.

Graham,
It looks like you have it all working as planned.

Is that the Garden Gnome variety Pano2QTVR?

I can see the potential. Looking forward to updates.

One thing I am pleased about is the lack of wobble in rotations, there is some side to side wandering on the vertical axis, I'll see if I can improve that.

I think for my research I will probably create my own software in matlab to allow zooming etc. If I have time I might also try to do export to .swf from that but I don't know much about flash other than drawing with it.

p.s. if the mouse is two sensitive use cursor keys
Top

Graham,
Flash has significant programming capabilities in ActionScript; but I feel that your earlier reference to SeaDragon and Photosynth is worth serious investigation. The resolution and zoom capabilities seem to me to be the way forward. It is truly a 'quantum' leap.