Why are images important for science

This area is for the discussion of what's new, what's on your mind, and general photographic topics. A place to meet, make comments on this site, and get the latest community news.

Why are images important for science

I was trying to get a confocal microscope financed for our department, and had some problems.

I could justify the purchase because of the specific uses that it will be put to, in this case it is to do with evaluating spatial distribution of community members in biofilms. We can go in and measure how far appart they are etc.

However, sometimes science is about more than getting the answer to a specific question, and I had an idea that taking a picture of something that you cant otherwise see is inherently productive. That there is a very good chance that you will understand the problem at hand in a way that was unexpected, because you would "see" something that you had not known was relevant or there before.

I tried to Google this to find out what the general relevant concepts were but couldnt really find anything, surely this concept has been studied and even has a name? But no, imaging science doesnt seem to justify its existance.

As most of the members here have a passing interest in pictures that i would judge as scientifically relevant perhaps I could hear some kind of justifcation for us to be able to see what we are growing, in terms that are not specific to the experiments that we already know we want answeres to?

Any thoughts would be appreciated that might explain why it is generally a good scientific strategy to be able to see what we are doing?

Re: Why are images important for science

tpe wrote:Any thoughts would be appreciated that might explain why it is generally a good scientific strategy to be able to see what we are doing?

I'm finding it hard to respond. My brain is full of thoughts, but most of them would be "preaching to the choir" and therefore pointless.

I do have one snippet that may be useful, at least to shake things up and make people think.

Part of my R&D background includes analysis of measurement data.

Among leading practitioners in the field, it is generally considered wise to look at your data before doing any sort of numerical analysis on it.

Nonetheless, periodically somebody needs to be convinced about the wisdom of that approach.

The standard reference in that case is to F.J. Anscombe, "Graphs in Statistical Analysis," American Statistician, 27 [February 1973], 17-21. A summary can be found on pages 13 and 14 of Tufte, "The Visual Display of Quantitative Information", 2001 edition.

What Anscombe did was to carefully construct 4 sets of data that are represented by the same linear model and all the same basic statistics. More precisely, each set of data has the following identical features:

Even expressed as tables of numbers, it's not simple to spot anything very odd about the data:

But when you graph the data and just look at it, a very different picture appears. Here are the four graphs, one for each set of data. Identical statistics, ppfff! 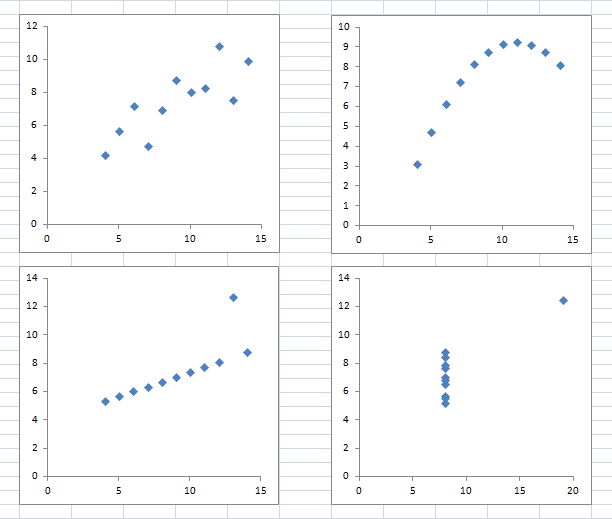 tpe wrote:there is a very good chance that you will understand the problem at hand in a way that was unexpected, because you would "see" something that you had not known was relevant or there before.

I hope this helps. BTW, I strongly recommend Tufte's book for anybody who has an interest in data presentation. It's a masterful collection of examples and lessons.

I have four of Edward Tufte's books: Envisioning Information, The Visual Display of Quantitative Information, Visual Explanations, and Beautiful Evidence. While there is some overlap among them, they each offer an abundance of ideas and insights.
Top

Hi Tim,
I am following this thread with interest but can't provide any relevant aportation in my poor english.


But no, imaging science doesnt seem to justify its existance.

I must say that initially I was surprised: after 32 years teaching science, for me the need of the images is so obvious and the quality of them so relevant that I couldn't imagine any need of further justification.

Many years ago we had at the school a blind pupil. I was very concerned on how to teach him Biology finding me hopeless unable to do it. Finally he never was at my classroom but the hypothetical situation did lead me to be more conscient of the importance of the image in science

Of course, justifying an expensive equipment for a specific application is a very different question, but as general approach...I stil can't find the words

However, sometimes science is about more than getting the answer to a specific question, and I had an idea that taking a picture of something that you cant otherwise see is inherently productive. That there is a very good chance that you will understand the problem at hand in a way that was unexpected, because you would "see" something that you had not known was relevant or there before.

There is a difference between teaching science and doing science. Doing science is about getting an answer to a specific question. Pictures may help or may not - depends on the question.

If I had to argue in favor of a new piece of imaging equipment, I would always use the teaching argument unless my problem, where research is funded, requires this imaging technique anyway.

Ecki wrote:There is a difference between teaching science and doing science. Doing science is about getting an answer to a specific question. Pictures may help or may not - depends on the question.

When you are trying to answer a question though, you are almost by definition teaching yourself something in the process. And pictures may or may not help as you said, but I would imagine it would be hard to reliably know how useful images would be without having had the images and information first. Otherwise its just a best guess scenario. Certainly a potential vs money judgement I think.
-Steven
Flickr Macro Rig Control Software
Top

Images are an efficient way to convey information, or search for it. As the OP alludes, new information may even be discovered in images too.

Each branch of the sciences use specialist words to describe things; very precisely of course, but I often have to reach for a dictionary to understand what I'm reading. I think pictures help bridge the (specialist) "language gap" between disciplines too. A good thing!

Taking my (admittedly specialist) interest in diatoms as an example. Would you recognise genus Asterionella from this (abridged) text?

"...Valves elongate, tapering slightly from the centre to the capitate apices; the basal larger than the apical pole. Areolae uniserate, sternum narrow, vela indistinct... Copulae several, split; one or two rows of pores occur down the advalvar slide."

But maybe that's just me.
Top

All I want to add to this discussion is to suggest that an image by itself, with no annotation, no caption and no explanatory text, is of little use scientifically.
It's analogous to a collection of preserved animals, such as pinned insects, bird skins, etc., that lack locality data.
I'm afraid that much of the imagery here on PMG.net falls into this category; beautiful images showing great technical skill often with data on the lenses and techniques used but sorely lacking in any explanation as to the identification or significance of yet another "fly-face".
NU.
student of entomology
Quote – Holmes on ‘Entomology’
” I suppose you are an entomologist ? “
” Not quite so ambitious as that, sir. I should like to put my eyes on the individual entitled to that name.
No man can be truly called an entomologist,
sir; the subject is too vast for any single human intelligence to grasp.”
Oliver Wendell Holmes, Sr
The Poet at the Breakfast Table.

Images create curiosity ending in questions. How can one describe the structure of a butterflies wing! The hair on a caterpillar!
To question is to learn. Only through answers can we know what questions to ask.
Fred H.
Top

This is just to say thank you for all the help. It was used to lessor or greater extent in 3 different applications, of which one was successful. We are now (today) entering negotiations about purchasing a Zeiss LSM800 for the department, and fingers crossed we should be able to post some images when we have finally got it installed out here on the boards