Wasp but what sort?

Wasp but what sort?

Found this fairly large wasp the other day, not sure if it's a common wasp or something else, the facial marking doesn't look quite right to me for one of those or the other common one round here which is the german wasp.

Anyhow it's at least twice the size of the common wasps coming and going from at least two nests in our house at the moment so it's either another species or a queen I guess.. It's not as big as a hornet though! 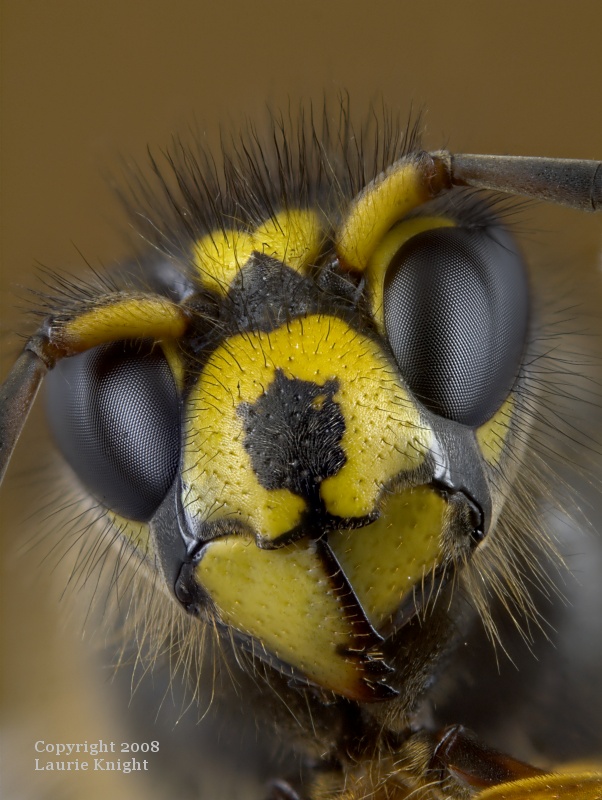 Om50/1.8 at f5.6 reversed on OM bellows, maybe 1/2 extension, maybe a bit less.. E330, macro twinflash lighting. Stack of 28 images (although I think only about 20-22 were used for this image) stacked in CZP no software alignment.
Top

Man... I love your insect portraits!! Your ant and now this one is probably the strongest reason why I'm getting an MP-E lens.

What's the magnification on this image? And I'm guessing you put a diffuser on your flash? The lighting looks very nice and soft...

Thank God most wasps in Australia are solitary.
Top

Thanks for the kind words!

You don't need to spend MPE money for this kind of magnification, especially if you're shooting in an indoor macro studio like me - if you want to shoot high mag bugs outdoors then the MPE is the best lens for any system... (I paid around $100 for my OM bellows, and around $10 for the 50/1.8 used on this shot. I'm sure you can get a Canon to OM adapter if you wanted to go down this route...)

This was quite a big wasp, the head is maybe 4mm top to bottom (so the vertical fov is around 6-7mm). My sensor is around 18mm long side so magnification here is around 2.5:1

Have a look at this thread for how I do flash diffusion... http://www.photomacrography.net/forum/v ... php?t=4819

btw I used to hate wasps, but I love 'em now, even hornets!
Top

da mn... I just threw away some packaging foam that you used for diffusing light.

I used paper towel but I think it's too thin and coarse to be effective and not to mention the lint might get stuck on the specimen.

When I decided to buy MP-E, I'm also buying the compactness it provides, that's very important for me since I don't have much space. Less parts also means less things to get broken as I am a bit careless sometime.

And finally I do like to leave them creatures outside where they belong. I still can't bring myself to kill them.

Anyway, look forward to your next portrait!!
Top

Beautiful... again!
And glad to hear you like wasps including hornets now, they are amazing creatures.


Wasp but what sort?

It´s a vespine wasp of the genus Dolichovespula.

They still scare me a bit, especially hornets, but I find them impressive now more than scary!

Thanks for the Id help, I had wondered about the norwegian wasp so I was in the right ball park!

I have loads of that foam stuff now, had some anyway, then got some more from my recent monitor upgrade, then I found a load more in my Nan's loft... So if anyone wants a bit of this stuff and doesn't have any, give me a PM and let me know how much you want and I might be able to send you some to get going! It does come in a variety of thicknesses, most of what I now have is quite thin but a lot thicker than tissue.
Top

P_T, an alternative to Laurie's foam is facial tissue -- Kleenex for example.

It's just a matter of physically which one is easier to get wrapped around each particular specimen.

I haven't noticed any significant difference in the quality of light.

If anybody needs to buy a bit of foam, it's worth checking at stores that sell packing & shipping supplies. There's probably a half-dozen places to get it in my shopping area.

BTW, sometimes it's helpful to use more than one layer of diffuser -- depends on how thick and translucent the particular material is.

There is a fine line between a hobby and mental illness.
Top

Rik
Don't you worry that Kleenex will catch fire under a fiber optic?
Or are we just talking flash?
In the instructions for OR fiber optic sources they always say don't let them shine on drapes. Don't know whether anything bad has actually ever happened but you certainly can feel heat.
Top

Cold-light fibre optics, with a heat-absorbing filter, are best for the comfort of the insects and do not cause convection currents when observing e.g. aquatic insects in water. The greatly reduced fire risk is a bonus.

g4lab wrote:Don't you worry that Kleenex will catch fire under a fiber optic?

I checked for heat output when I first got my lighting unit. It's not a problem in my setups, which always have an air gap between the fiber bundle and the diffusing material. The purpose of the gap is to allow the light to cover a larger area before it gets scattered onto the subject, but it also provides a way for the small amount of heat to dissipate.

You raise an interesting thing to think about, though. I did a quick Google search and found that both polyethylene and polyurethane melt well before paper ignites, although the plastics' ignition temperature is higher. Ping pong balls are worse. They're made of celluloid (cellulose nitrate), which auto-ignites at 338°F, over 100 degrees below paper. Paper chars well before it ignites, but the margin between first visible effect and ignition seems not as large as for the plastics. So if there were a significant safety question, I guess the plastic foams would be preferred as diffusers.

I suspect that the warning you speak of refers to a worst case scenario -- something like placing the fiber end right against some fluffy material that could either melt (synthetics) or burn (cotton) at relatively low temperatures.

I suspect that the warning you speak of refers to a worst case scenario -- something like placing the fiber end right against some fluffy material that could either melt (synthetics) or burn (cotton) at relatively low temperatures.

Medical warnings are almost always worst possible case. And surgical drapes can be cotton muslin, paper disposable, polyester, and many other materials.
There also has been a promotion of three hundred watt arc lamps in the OR. Some are metal halide and have a warm up time and thus may be left on for case logistic reasons. When the fiber cable is not there(because the surgeon walked over to the OTHER side of the patient and plugged his headlight in to the one running on THAT side) you can really feel the heat. Most have heat absorbing filters but some don't. On some quartz halogen illuminators sold today the heat absorbing glass is an extra cost option. Sometimes you don't want it in the light path for one reason or another.

Your info about the ping pong ball is an excellent data point. I have some recollection of some high school friends lighting ping pong balls. They burn away like flash paper with no residue and quickly but not quite as fast. But that low ignition temp is something to pay attention too. Perhaps switch to a safer material.

I did not doubt that you would have checked it. But it is always good to think about and talk about safety.

Thanks guys, that's some interesting/useful info there, I'd read somewhere about fibre optic lights being 'cold' and I'd assumed stupidly that they all were so. Apparently not, so something to watch out for!

As I don't mention it in every pic post - I currently use a macro twinflash for all my stack lighting, though I've been looking out for a decent, reasonably priced fibre unit + twin arm pipes for a few months now...
Top

I'd read somewhere about fibre optic lights being 'cold' and I'd assumed stupidly that they all were so. Apparently not, so something to watch out for!

When I was shopping for the M400 outfit in 1977, a swiss guy from Volpi USA (which was brand new then) kept telling me over and over "Its so cool you can put a chocolate under it and it won't melt"

That actually is not consistent with my subsequent experiences.
But I still like fiber optic illumination the best. You can put it right where you want it. And wide variety of guides and tips.

If you read old books on microscopy you will see a lot of lore about water cooling cells. Especially where arc lamps are involved.
Top

Laurie,
The 'cold' generally refers to the K temp. Flash is 'hot' because it has a higher K temp.

If someone can explain this in a more technical way - please do.