Attached are my first photos of the mountain swallowtail: 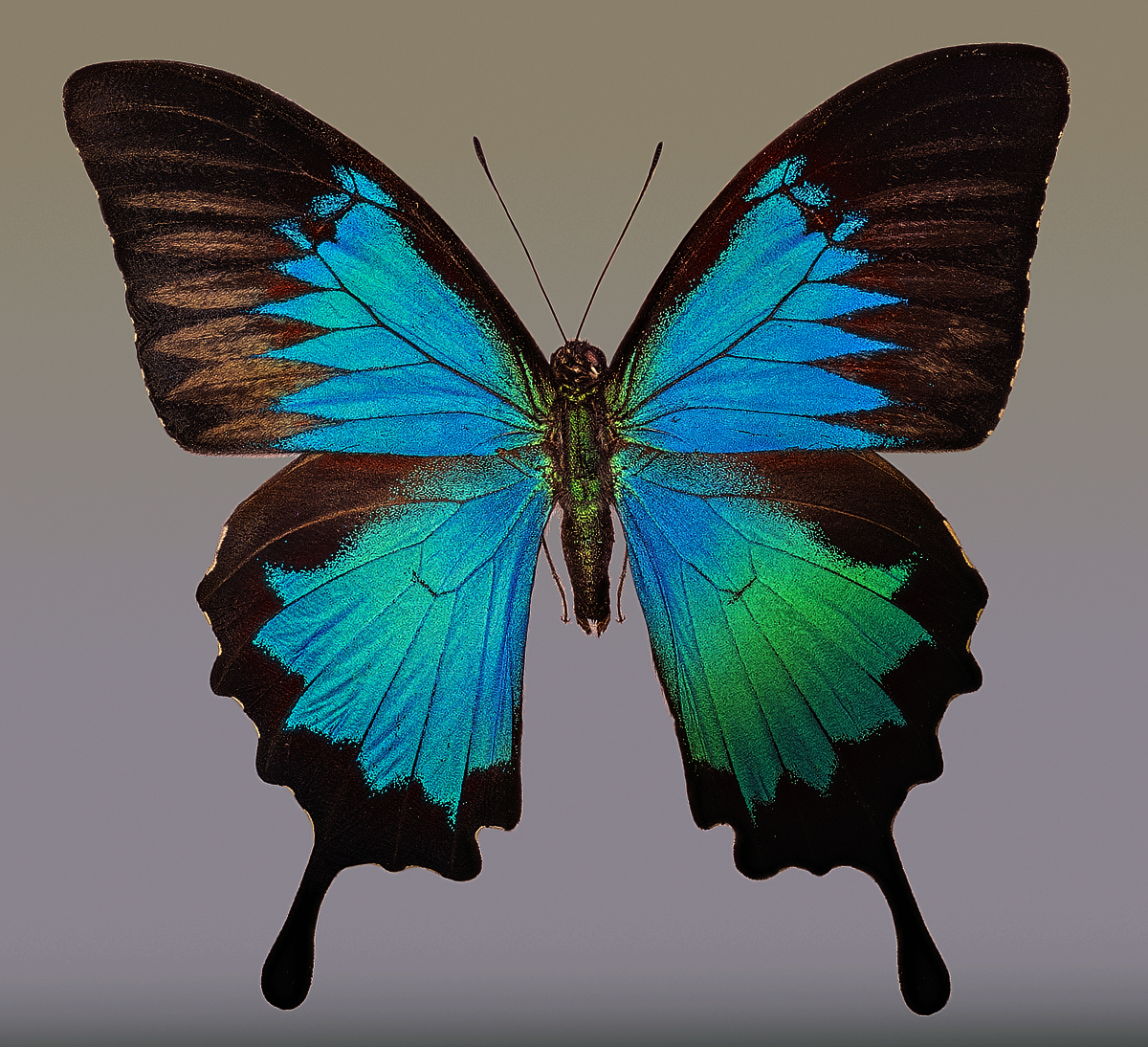 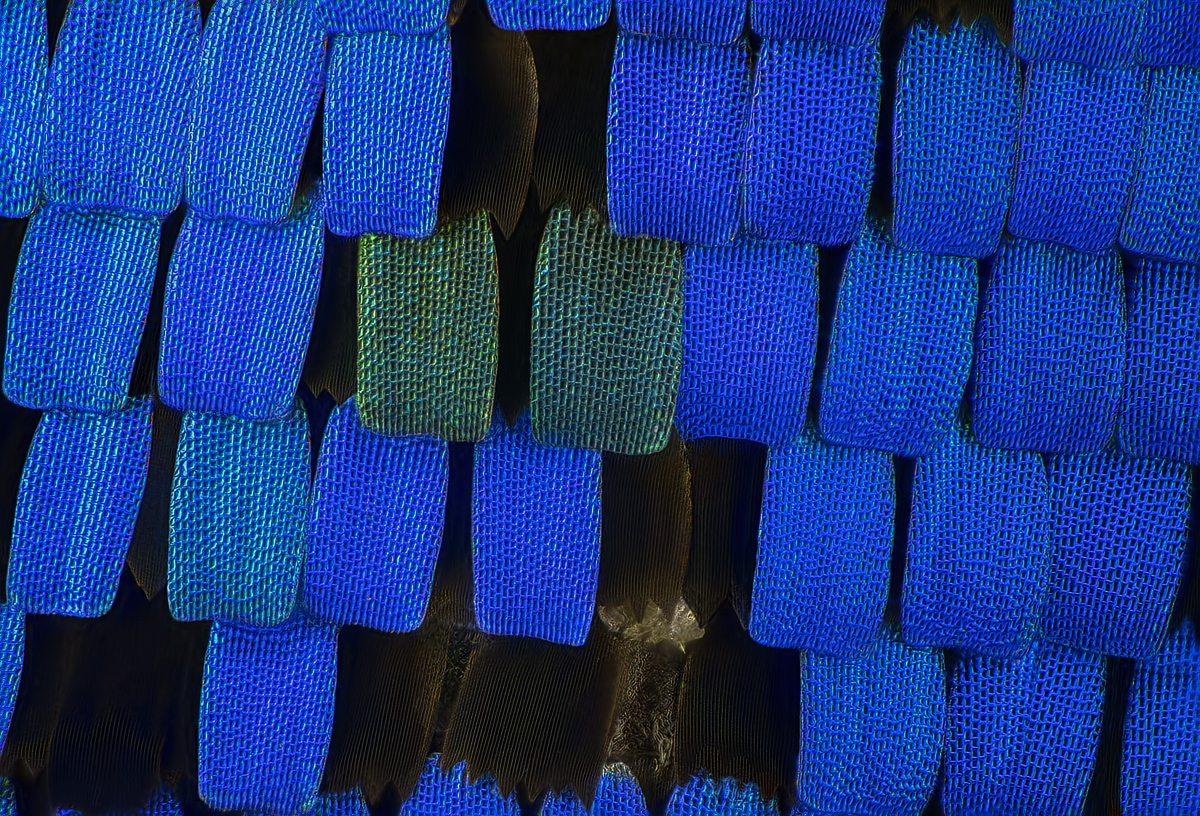 BTW, does anyone know the best method (Lanczos3, Lanczos8, etc.) to interpolate the blue scales?

So, by the time the image gets into the stacking software, it's working with about 6 pixels per cycle, at the diffraction cutoff frequency where MTF=0. Coarser detail with MTF > 0 has even more pixels per cycle.

It seems to me this is so far into diffraction territory that the choice of interpolation method will make little or no visible difference.

If this stack were mine, I would run the default 4x4 cubic spline interpolator without a second thought. If you're fond of Lanczos 3, that should be fine (6x6 kernel).

But since you've posed the question, I suggest as a test to run Lanczos 2 (4x4 kernel) against Lanczos 4 (8x8 kernel) and compare the results. If they are significantly different, I will be interested to know.

Hello Rik,
I have compared DMap interpolated with "Bicubic", "Lanczos2", "Lanczos4" and found no difference.
But in general, DMap performance is much better than PMax, regardless of interpolation method.
Does it depend on the blue scales or my setup?
Best,
ADi
Top

Adalbert wrote: ↑
Sat Jan 09, 2021 6:16 am
I have compared DMap interpolated with "Bicubic", "Lanczos2", "Lanczos4" and found no difference.
But in general, DMap performance is much better than PMax, regardless of interpolation method.
Does it depend on the blue scales or my setup?

In general, DMap is better at handling simple geometries that do not have troublesome front/back overlaps, while PMax is better at handling complicated geometries such as overlapping spines or hairs. This is because DMap retains the original contrast, colors, and noise, but is vulnerable to loss-of-detail halos around edges, while PMax is much less vulnerable to loss-of-detail halos, but accumulates noise and often changes contrast and colors. At large NA, there is also the issue that DMap is much less vulnerable to the "squirming around" effect shown HERE.

The scales here have rich colors and only a few shallow front/back overlaps, so they are a natural match to DMap. I would stack with both DMap and PMax, then flash-to-compare, just to check whether DMap might have missed some detail I would care about. I would not expect to find any, but if there were, then I would retouch just those areas from PMax output into a DMap master.

Regarding interpolation method, that becomes significant only when source images are sharp at the pixel level, say effective f/8 or wider on APS sensor. In this situation color can be important because short wavelengths diffract less, which produces an optical image that is sharper and contains finer detail.

Countering that, with most sensors, is that the Bayer filter pattern places only one blue-sensitive pixel in each 2x2 block, with blue for the other pixels being filled in by interpolation during the raw conversion step. The result is that the stacking algorithm never really has to deal with an image that is sharp at the pixel level in intensely blue areas. So, as a matter of practice, I would expect these intensely blue scales to be less sensitive to interpolation method, compared to scales with a more neutral color.

Hi Rik,
I usually always combine Dmap with Pmax, but in this case there was nothing to take from PMax.
Most of the time I paint over the hair with Pmax.
Best,
ADi
Top 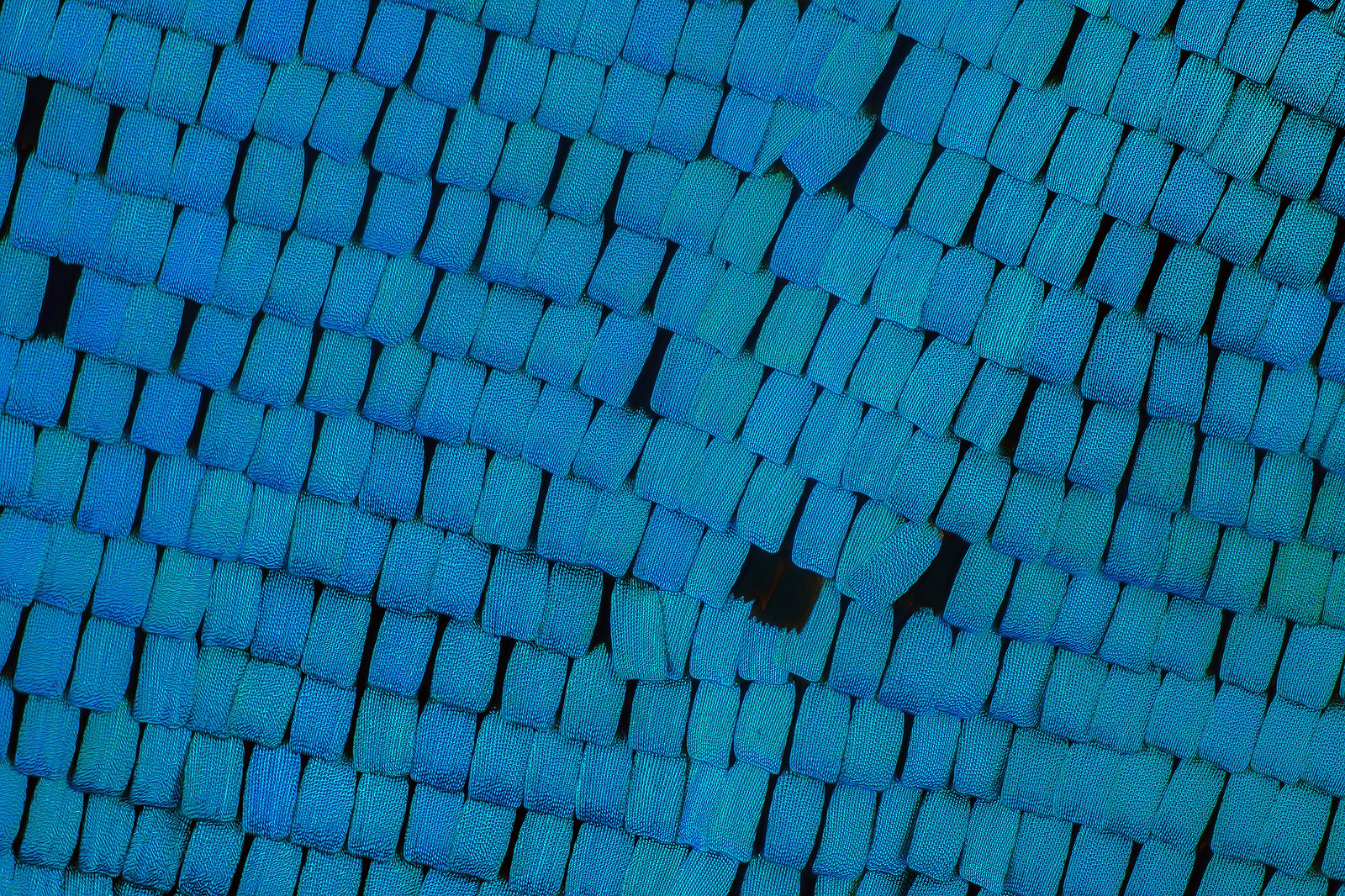 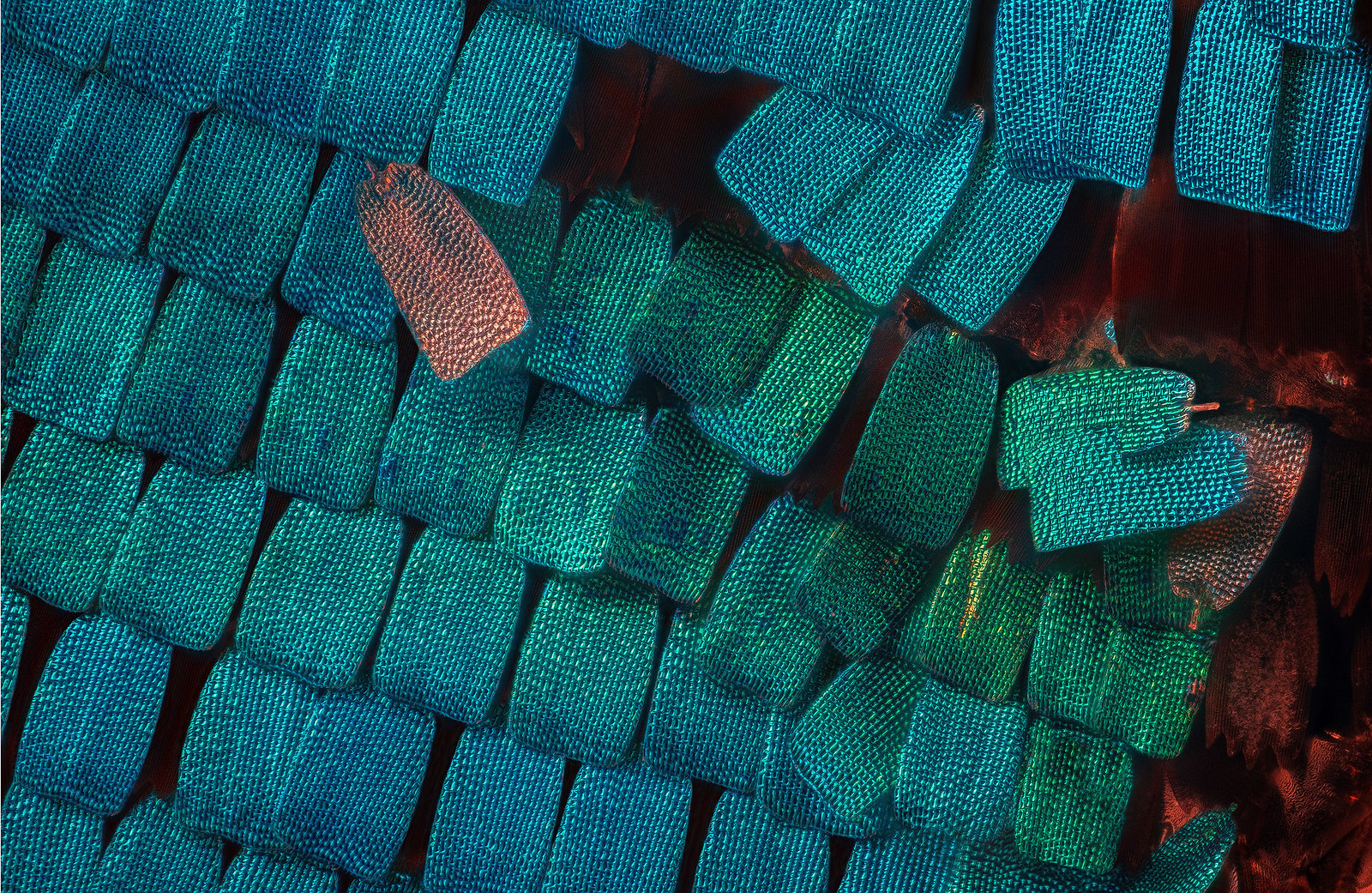 Hello everybody,
This time roof tiles were missing: 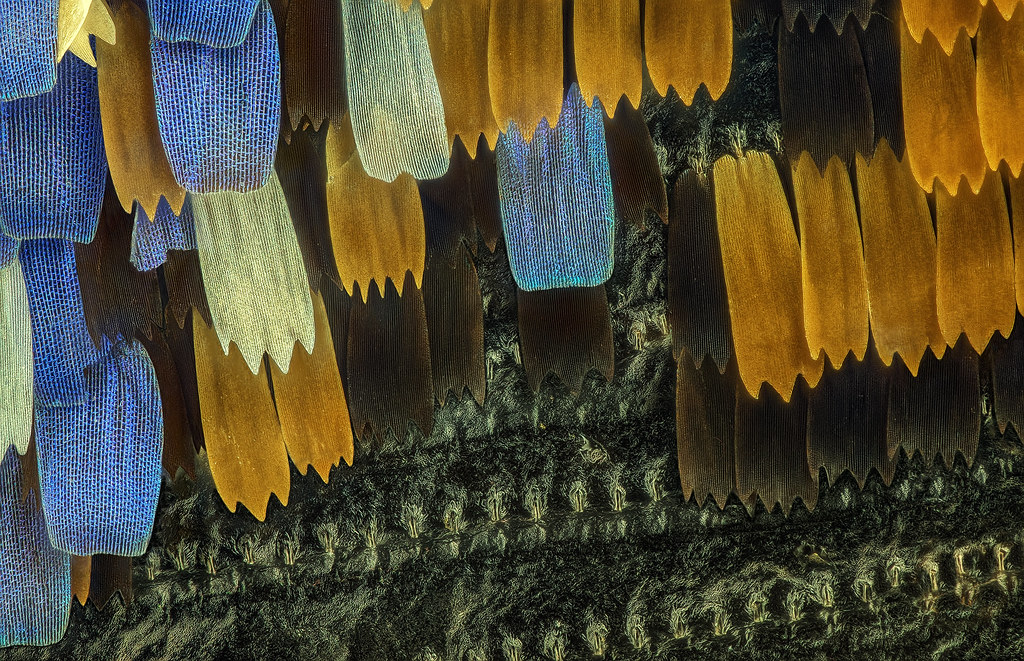 Very interesting pictures. I was surprised by the difference shapes between the blue scales and the brown and yellow ones. Any idea if they serve different purposes? I know basically nothing about butterfly scales.
Top

To your question I would like to answer in this way,
that the resolution depends on the NA of the microscope objective.
So, the higher the NA, the better the resolution.

Thank you for the links. Interesting material. I did not know that their colors were produced by refraction rather than pigments. However those articles dive a bit too deep into this particular science for me.

The shape I was actually referring to was the fact that the yellow and brown scales had a scalloped edge along the bottom.
Top

Hi JSkory,
Yes, the brown scales have usually a scalloped edge along the bottom
e.g. sunset-moth: 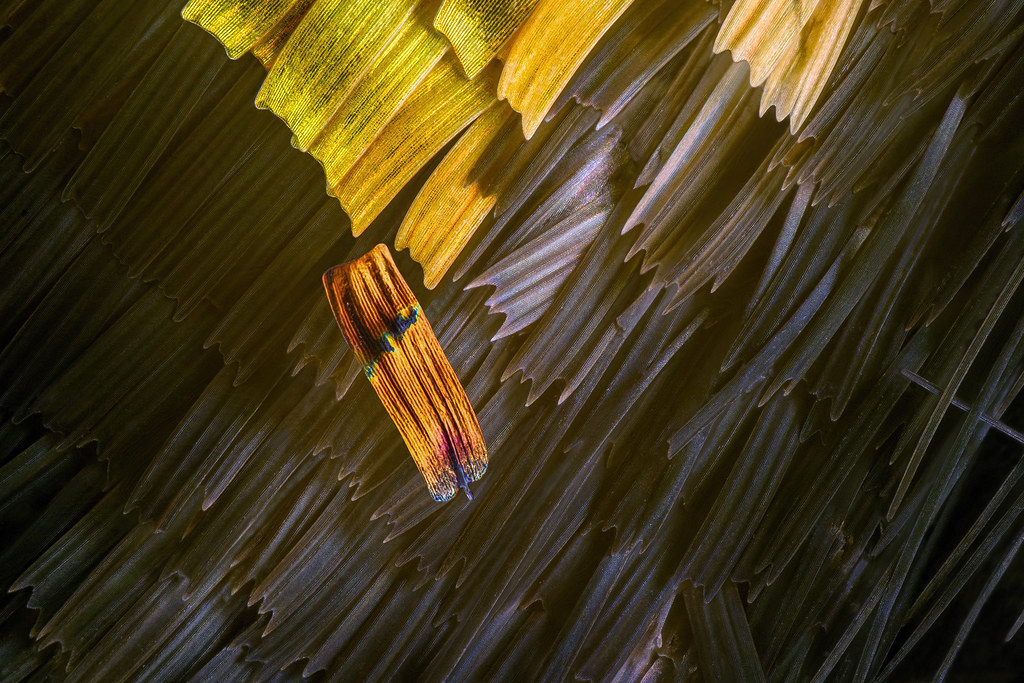 And now the dirty claws of the mountain swallowtail: 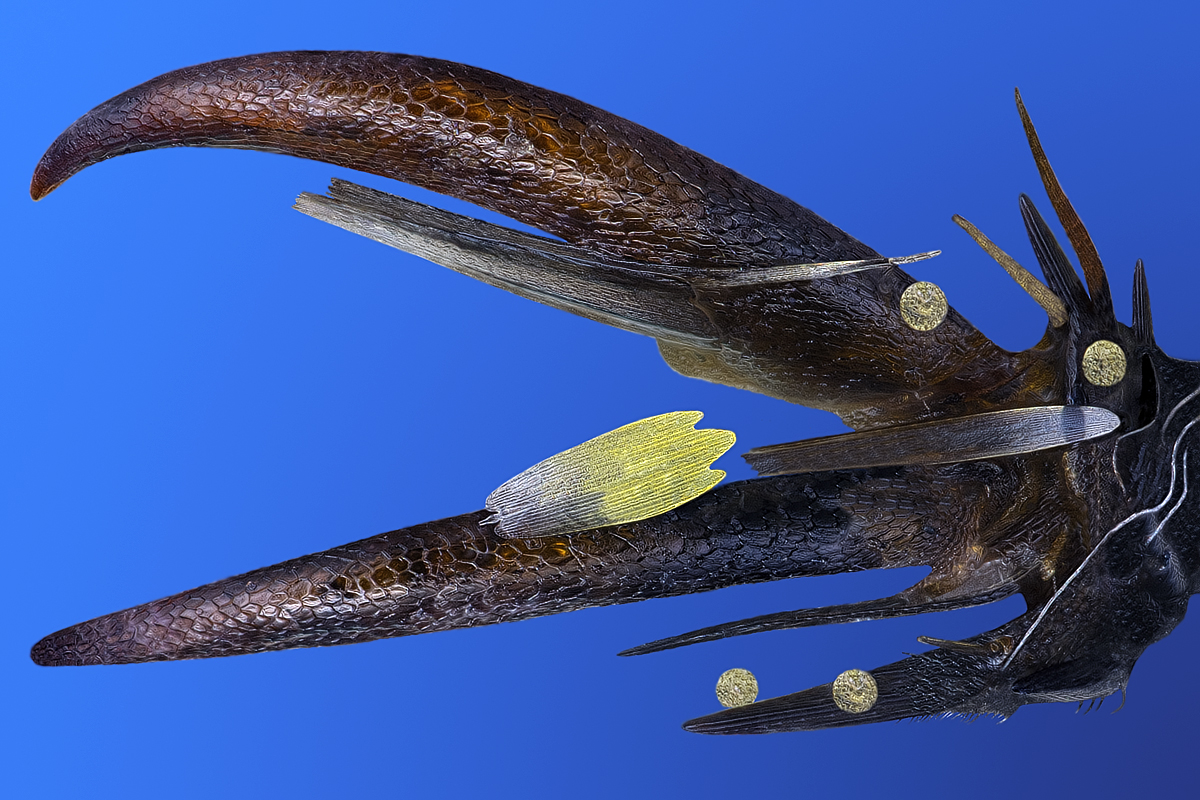