I have absolutely no experience of this since i've got my 5DmkIII and 6DmkII, generally taking landscapes, architecture and anything else that comes my way.

So, I have no clue on what lens to buy and i'm looking for advice from experienced macro photographers.

I know of the Canon 100mm f/2.8 mkII which may be an option, I know there are also some Canon-fit Sigma lens which i've seen some good results on. I also know of the Canon MPE-65 but that's not quite where I want to go, maybe just sticking to a 1/1 lens for now. I need to take a good photos of flowers becouse I delivery flowers Kharkov and need nice pictures.

I do not recognize that name for a lens. I have the Canon EF 100mm f/2.8L Macro IS USM, which is excellent.

Another option is to buy and older lens with a diaphragma ring.
http://www.astapix.be/
Top

I'm gonna give you some really unpopular advice, but I'm also gonna explain why: Do not get a macro lens in the 100mm focal length range.

For flash based macro: You really want to get the flash as close to the subject as possible to keep the duration of the flash to a minimum (easier to freeze motion) and to get good diffusion (the closer the diffuser is to the subject the larger it is in the subject's field of view = softer light). So since it's best to get the flash close to what you're shooting lenses in the 60mm range work best. I take nearly all of my insect macro with Canon's MP-E 65mm (not recommended for a beginner -steep learning curve.). There is no such thing as a "bug lens". It's your knowledge of the subject's habits and quirks, and it's willingness to let you get close, that will determine if you can get the shot.

One good possibility for a Canon shooter is the EF-S 60mm macro lens. It loses focal length at minimum focus, becoming a 37mm lens when set to 1x. So it only takes 37mm of extension tubes to get it to 2x, and with 50mm of extension you'll get just over 1x at infinity to 2.5x at minimum focus. Plenty sharp as well. 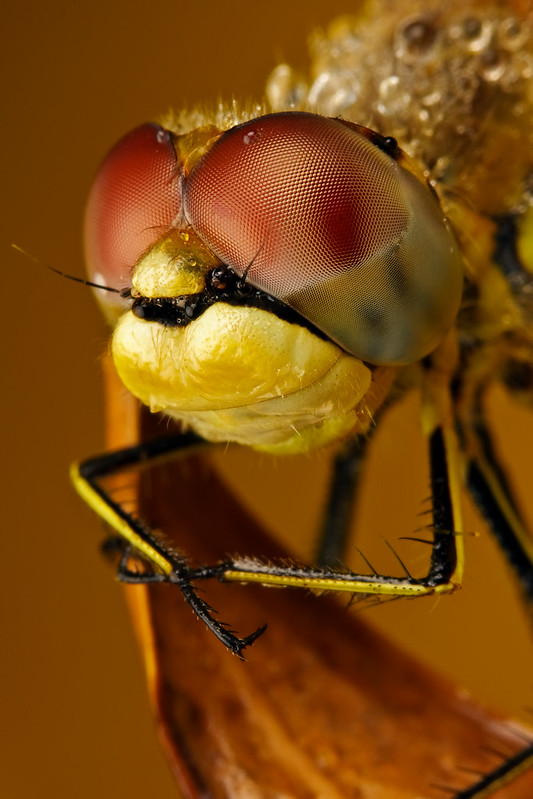 Spring in October VI by John Kimbler, on Flickr

For natural light based macro: You really want a long focal length lens, so you won't shadow the subject and you have room to work. Odds are, if you care about the quality of the light you're shooting in, you'll be doing all of your photography in the golden hour around sunset or sunrise or on days when there are some light overhead clouds acting as a diffuser for the big yellow ball. So you'll also probably want a tripod and focusing rail as well cause there just isn't gonna be enough good light for a hand held shot -although In Body Image Stabilization (IBIS) and lens Image Stabilization (IS) combined might actually allow you to hand hold the gear in some situations (has yet to be seen). So a lens in the 150mm range or longer is better. I don't have any examples of natural light macro shooting with long glass cause I prefer to use a flash.

Not saying that you can't use a macro lens in the 100mm range for shooting macro -plenty of people do. But it's not the best focal length no matter what light source you choose. Almost like trying to remove a Philips head screw with a flat head screw driver...

All of my advice goes out the window if you don't care about the quality of the light that you're shooting with. Light is important, cause you can lose more detail to poor light than to diffraction...

Edit: Would also add that you can flush my advice if all you want to do is studio macro. In a controlled environment you can pretty much use anything you want and it's somewhat easier because you have plenty of room to work (and odds are the subject is dead). In the field you're going to be limited by what you can lug around and set up, and for shooting active critters I prefer to keep the gear list to a minimum so I can allow the subject to dictate how I'm going to photograph it. Use a lot of gear, or a set technique, and you'll be looking for something that's gonna cooperate long enough for you to get set up and press the shutter.
Last edited by Dalantech on Tue Aug 04, 2020 5:11 am, edited 3 times in total.
My Gallery
My Blog
Macro Tutorials
Top

Of course 50mm used to be the standard macro lens.

It is pretty hard to go wrong with a macro lens in terms of sharpness. All are terrific. Lenses in the 100mm range are very versatile in terms of giving you the framing that you want in most situations without resorting to extension tubes to get to 1:1. Although I have not used shorter macro lenses so I don't have a basis for comparing them, I am still very happy with my Canon 100mm f/2.8 L.
Mark Sturtevant
Dept. of Still Waters
Top