Cryptic moths avoid detection by matching the environment. One question is 'do they select their resting place to match their colour?'
For some environments choosing is mute, moths living on sand dune or beaches have no need to choose (as long as they don't rest on plants); for moths living on peaty soils choosing is not needed; similar situation for moths living of chalk.
However, for moths that match a specific piece of background it would seem that choosing the correct background would be essential for survival. Several of the Fall-flying moths have the colour of dry leaves, it would be critical for such individuals not to rest on any contrasting background.
I run a moth light trap most nights, moths trapped alive in a large plastic box with screen sides for the moths to rest. This am (31x19) there were 3 dark moths resting on the white screen (not cryptic!). On the bottom of the trap there was one dry white birch leaf and resting on it was a Straight-toothed Sallow (Eupsilia vinulenta). Appears to me to be an example of a cryptic moth selecting its resting background. 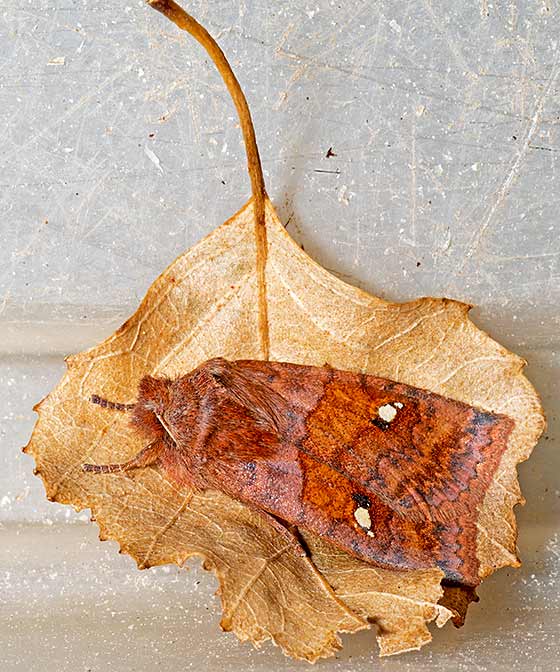 NU.
student of entomology
Quote – Holmes on ‘Entomology’
” I suppose you are an entomologist ? “
” Not quite so ambitious as that, sir. I should like to put my eyes on the individual entitled to that name.
No man can be truly called an entomologist,
sir; the subject is too vast for any single human intelligence to grasp.”
Oliver Wendell Holmes, Sr
The Poet at the Breakfast Table.

Interesting. This summer I was working with some flower-lurking crab spiders. They seemed to really want to be on a flower. when that was offered, they seemed eager to settle into it.
Mark Sturtevant
Dept. of Still Waters
Top
Post Reply Previous topicNext topic
2 posts • Page 1 of 1