I'm not usually a bug person but while I was out taking shots of wildflowers in the desert I spotted this wonderful creature wandering solo. I have no idea what it is but the photo does not do it justice unfortunately. When the sun was hitting the shell it shone with the most striking iridescence. We captured it in a clear plastic specimen container long enough to get it's photo. It looks like an ant carrying a shell. We have velvet ants here in the Chihuahuan desert but I've never seen one like this. So...? All photos were taken using Canon T2i, 100mm macro, Fotodiox extension tubes 28,14, and 7mm and Raynox M-250 Lens. Camera was mounted on a Manfrotto 454. The Cosmos and (Hibiscus type) Blooms were shot in a studio setting and processed with the Zerene Stacker program. I do not yet own a flash so this was done with the on-camera flash. 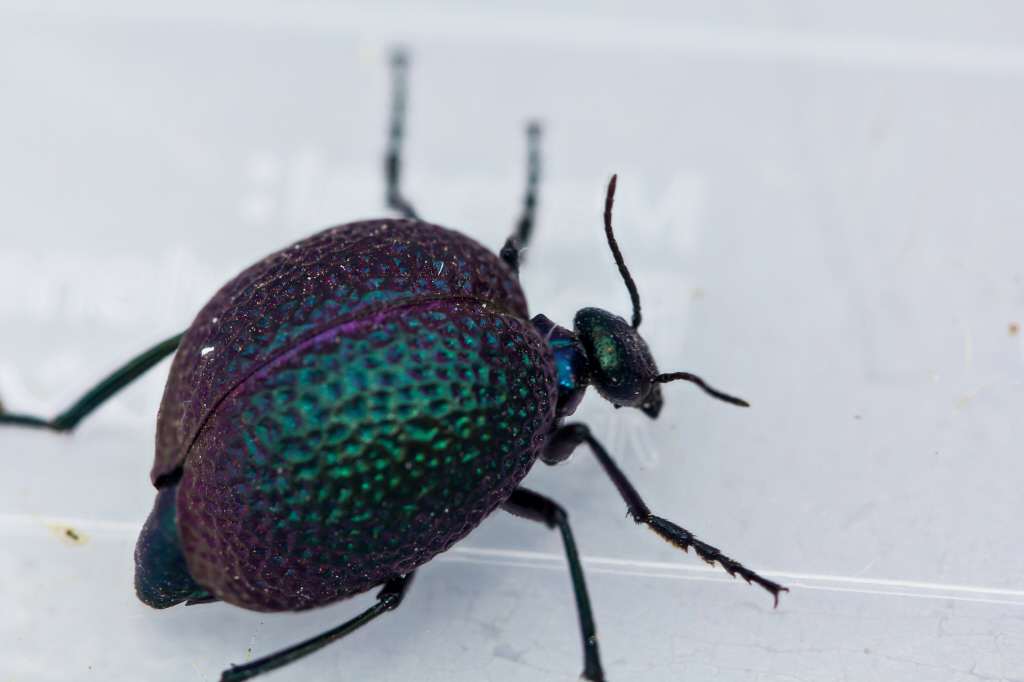 Cosmos in bloom here in the Chihuahuan Desert 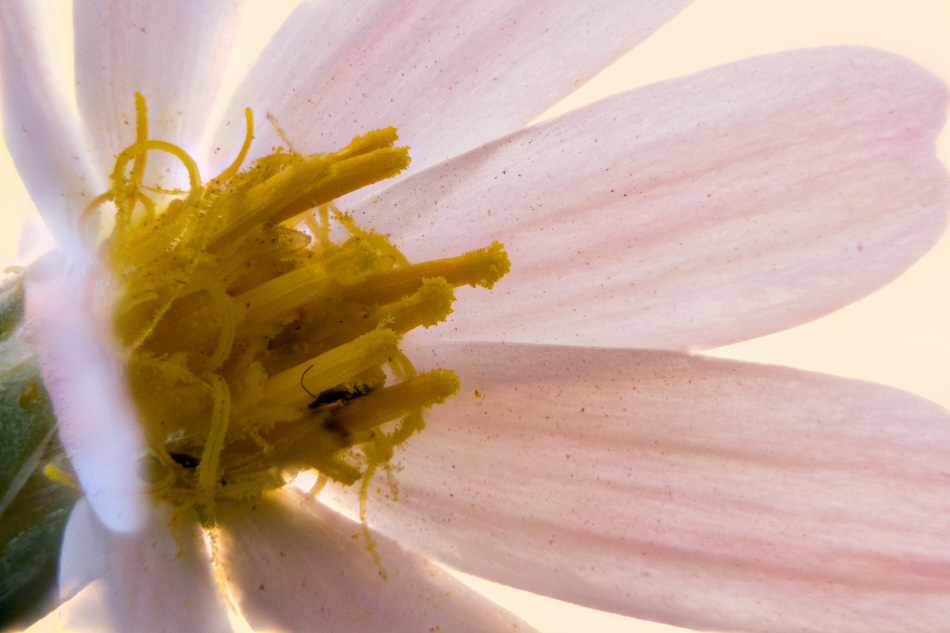 Another view of the Cosmos 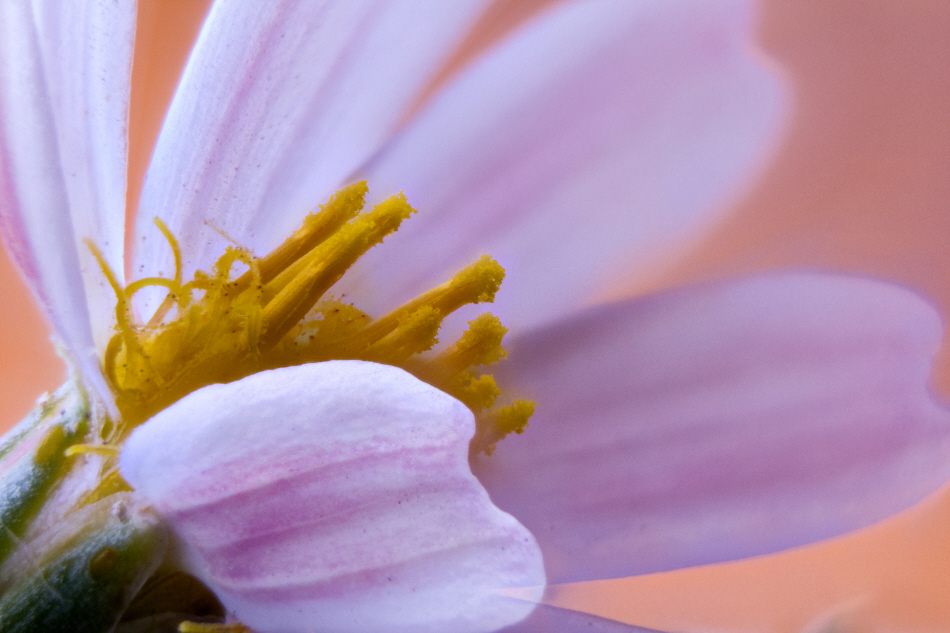 I don't know the name of this beauty but it's about the size of a dime and it reminds me of hibiscus blooms so it might be in that family. Not sure. 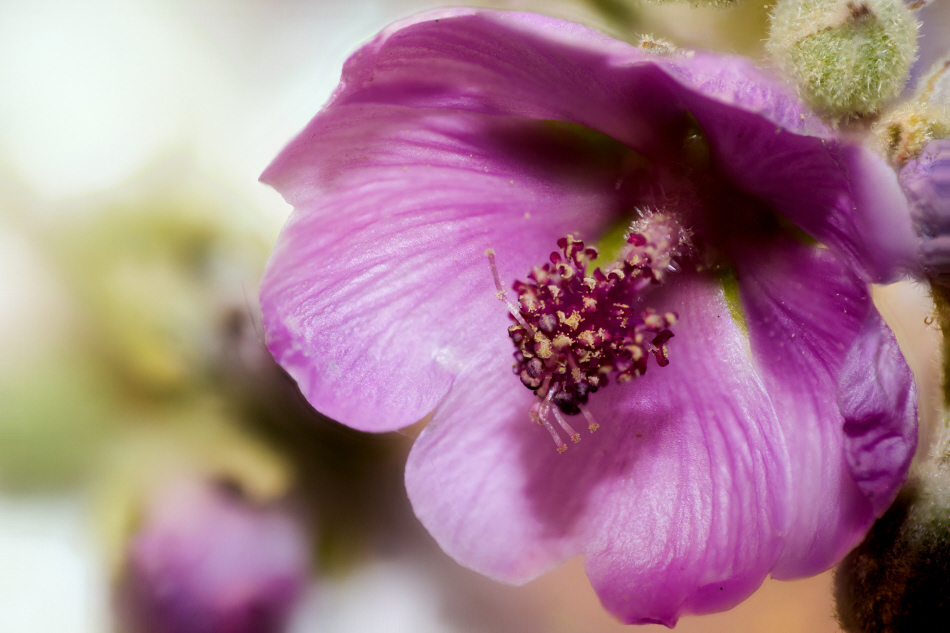 I have to say that the Manfrotto 454 is perfect if you don't care to get as close enough to the subject in order to get close up shots of pollen grains while using the Zerene Stacker program. Otherwise, the Manfrotto 454 has a slight play in the turn of the screw. Any slight play whatsoever will reveal itself as a ghosting effect since the pollen grains will not line up correctly with each correlating shot. I know that these things are expensive but for what I paid for it, I think it should have been a mite more accurate. For now it will do. Just an FYI for those out there contemplating a purchase of a macro focus rail. I don't intend to purchase the more expensive Novoflex since I cannot rationalize the purchase. Enjoy.

Charlton
Charlton Vaughan
The world is what we make it. http://limestoneandpumice.blogspot.com/
Top

Your first insect is a beetle, order Coleoptera. The general appearance reminds me of some "blister beetle", family Meloidae, but I certainly don't recognize the exact species. It could also be one of the "darkling beetles" (Tenebrionidae).

BTW, I think you accidentally clicked "Reply" instead of "New Topic", when you made your post. I had to split this one off the end of Artistic Flowers by carlos, where it was clearly not appropriate.

As Rik has said, the beetle is a blister beetle, family Meloidae; specifically, it is Cysteodemus wislizeni.
Top

I am so sorry Rik and Forum. I was probably still asleep somewhat and in a rush to get outside for more flower photos and did indeed click the wrong button. No, that was clearly not the appropriate forum. Thank you both for the insect ID.
Charlton Vaughan
The world is what we make it. http://limestoneandpumice.blogspot.com/
Top

No problem, these things happen. (They just seem to happen less often if I mention them.

I think the last one is an Abutilon.

Thank you Harold. Yes, that is what the last one is. It is in the Mallow family. This particular one I found in the Wildflowers of Texas guide book. It's called Pale Face Rose Mallow or Rock Hibiscus. I'm finding that the heights and bloom timetables are a bit inaccurate where this area is concerned. Our weather here warms up sooner than other parts and we are at a lower altitude than most of Texas. Rain fall is less here so plants do not have the height as they would in other locales with more rain. Everything is blooming almost all at once this year. I think the plants know that they need to bloom now since apparently we are forecast for another drought which does not bid well for the native flora and fauna here.

Charlton
Charlton Vaughan
The world is what we make it. http://limestoneandpumice.blogspot.com/
Top
Post Reply Previous topicNext topic
7 posts • Page 1 of 1