Olympus BH2 microscope without optics - what next?

Olympus BH2 microscope without optics - what next?

Hi,
I saved a Olympus BH2 microscope from being scrapped by my employer. It has no optics, missing the light condenser, and got a lot of smoke dust inside it from the fires we had a few years ago.
I am wondering what I should do to put it to best use. I am confused by the variety of objectives on ebay - which type should I consider? Should I look for eyepieces or kludge a way to connect my DSLR directly? It has a standard stereo head - not trinocular.
I can't justify spending a ton on it (no $500+ objectives).

Welcome aboard!
I like your website pages about that old timer's lab. That is one great thing about ebay. Places like that don't just get pitched as often. Instead people sell stuff and may be amazed at what something might bring. Think of the skill that guy had. He knew what the blank HE was doing.

Many reads but no help.
Investigating my scope more- it is a BHT/BHTU. It has a functional lower lighting system but aluminum plate over the stage to prevent its use. It has a vertical lighting system with ND filter and inline lenses with a slot for a filter or something. The nosepiece is a 4 port with 25mm diameter ports. It has a stereo head.

I am totally new at this. I need to know what objectives give the most bang for the buck.

To dedicate this assy to photography would it be worth taking the head off and building an adapter tube for the camera, rather than getting a photo eyepiece and try to make that work?

I see articles here of people using objectives with bellows. Should I treat this thing like that - take out obsticles in the light path and preserve the focusing ability? That approach requires a thread adapter from 25mm to others. What is there for this?

One approach keeps the metallurgical nature with vertical lighting supported, the other is much like the bellows approach. Which way to go?
Top

Can you post some pictures of the beast as it is at present? That may help in understanding what will be needed. Also, what sort of specimens were you hoping to observe? - that makes a difference as to what setup might be best.

You also say it suffered from smoke ingress - what is the damge: are the binocular prisms reasonably clean, for example?

It may be quite feasible to set up a camera on one of the binocular eyepieces, rather than improvising a replacement. What DSLR are you using - do you have live view?

Though we lean upon the same balustrade, the colours of the mountain are different.
Top

As Graham said, a couple of pictures would really help.

Even though you provided the model, there were various configurations. For example... some had removable nosepieces, there were (at least) two quite different vertical illuminators. (The top you have is a "binocular" head, stereo is something different and not possible with these scopes.) For the larger diameter "BD" objectives Olympus first had a 25mm thread mount, and then went to a 26mm thread mount. Adapters to RMS threads can be located (see eBay 370336716299) but they are not cheap. If the nosepiece is removable it would be better to locate one that takes RMS objectives.

If you have not found reference material already, you can find some for this microscope here:
http://www.alanwood.net/photography/oly ... loads.html
http://www.krebsmicro.com
Top

Hi all,
Thanks for the interest.
I have both a Nikon D70 and D200 - both of which do not have live view unless it is supported remotely via pc - I haven't looked into that.
The smoke ash likely got into the eyepiece ports. I have not yet set about to cleaning the beast. It might just blow out for the most part...
The nose piece is a 4 port and removable, 25mm opening. You say Olympus went to 26mm later - oh boy. Is that the opening or the objective, as the objective would be wider... Don't want to buy the wrong ones...
Looking at the BHM manual on your site Charles, it has the BH2-RLA illuminator. But I don't have the polarizer or filters - nothing that may insert into this thing. I am at work now so can't post photos from here...
Does this -RLA thing have a user manual - I've never been exposed to using one. I'd like to try the polarizer... if I could.
As to what I would like to observe - it would be most anything within the limits of its capabilities. I have nothing of special interest in mind.
My scope has the lower illumination system but no condenser and an aluminum plate mounted to the stage prevents such light from reaching the subject.
The objectives I see in the manual say "Neo S" or "Neo D" Plan. However the Neo objectives I see on Ebay just say "Neo" like:
http://cgi.ebay.com/OLYMPUS-MICROSCOPE- ... 5639cd8ead
This guy has several different ones for sale - are they appropriate?

Charles,
I searched on Neo objective and came upon your submittal:
http://www.photomacrography.net/forum/v ... php?t=8114
You have the bh2-uma manual on your site. I guess I can learn from reading that. I loved those 2 photos - love to be able to accomplish such sometime in the future...
Top

What does Neo actually mean? Why name several different objectives such to make so much confusion?
Top

"M" style objectives come in two types... ones that can only be used for "brightfield" (when a vertical illuminator is used as the light source) and those that can be used for both brightfield and darkfield (if the vertical illuminator is capable of both). The BH2-MA is brightfield only, while the BH2-RLA and BH2-UMA can provide both brightfield and darkfield. (Keep in mind that if your base illumination is working and you had a condenser and an open stage, you could do transmitted illumination with these "M" objectives as well. They are meant to be used without a cover slip, but it's generally not an issue until you get to NA's over about 0.40).

Here's where it can get confusing...

The older objectives (not suitable for the "infinity" vertical illuminators) would be marked something like the following:

The newer infinity style objectives are marked like the following:

The key here is the "S" and "D". They will also be engraved with the "infinity" symbol, and "f=180", which is the focal length of the tube lens. The "S" versions have higher NA's and provide a "super-wide" image suitable for eyepieces with a 26.5mm field number (you would need the viewing head capable of holding the larger eyepieces as well... not common and usually expensive). Take a look at eBay 370336716299 and 390134009076 to see these markings. The barrels also have a different appearance.

Since you have a vertical illuminator capable of both, it would probably be best to consider the Neo objectives. Brightfield and darkfield with a vertical illuminator look very different, and often I find I like darkfield better. Also, brightfield can be extremely frustrating if you do not have a polarizer and analyzer. Without crossed polarization, the reflection and glare are simply far too great with many subjects.

I'm not sure why you would have a 25mm threaded nosepiece if the microscope is equipped with the BH2-RLA, since the Neo S Plan and Neo D Plan objectives have a slightly larger thread size. (Perhaps it's a little larger than you first measured).


Why name several different objectives such to make so much confusion?

Some of the used microscopes gear that is still of interest dates back to the 60's (and even farther back). We're looking at gear that has changed significantly many times over the past 50 years and there are plenty of confusing issues!
http://www.krebsmicro.com
Top

Wow. This 25mm vs 26mm is a nice tricky one... Below is how I measured the nosepiece port. 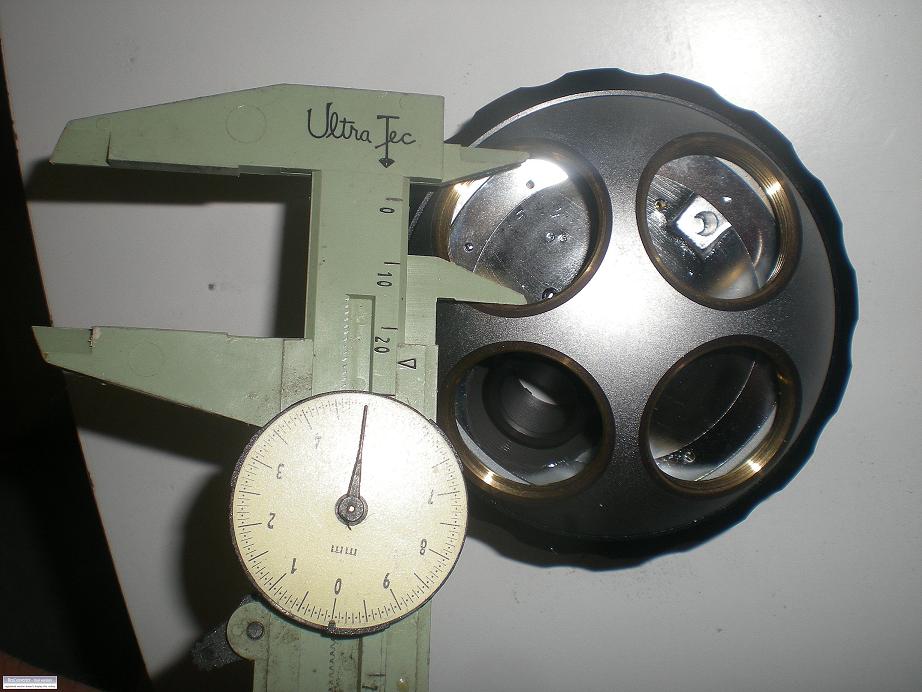 I don't have a condenser although the spot for it is there... Imagine they aren't too cheap either...
Starting to see why someone left this thing as scrap.

So given all you wrote about the Neo variations, the last ebay offering I referenced (for $289) Neo is likely the correct one, yes? It had f=180mm on it as does the BH@-RLA on my scope. The key is whether it has 25mm or 26mm diameter. And I'm not too cool with spending this much right now - don't have eyepieces yet either. And to photograph I need a photo eyepiece rather than the more common pairs seen for sale, right?
This is all making the bellows approach look better and better, although it would be nicer to have a camera with liveview...
I might just not have the bucks to play in this game.
Top

Ultimately if you want to get it up and running as a microscope, there's no way to do that without dropping significant money into it.

But it's a nice stable stand with an excellent coarse/fine focus mechanism. So proceed with the bellows/extension modification. (A couple sets of the cheap Chinese tubes would give you a pretty good range of extension if you don't have anything on hand already). If you get a RMS threaded nosepiece you could get something like a Nikon CF M Plan 10X and have an interesting vertical stand (with patience I've seen these go for around $100 or less). Even without the nosepiece should be able to rig up some type of lens attachment method for the top of the stand.
http://www.krebsmicro.com
Top

Just ordered a rms to 25mm adapter ring. That will get a cheap objective on the thing but can still look at 25mm options too.
Top

bklein wrote:Wow. This 25mm vs 26mm is a nice tricky one... Below is how I measured the nosepiece port.

Usually when people talk about a thread size they are referring to the major diameter which is basically the diameter of the threads on the male part - you seem to be measuring the inner diameter of the female part which could easily be 1mm smaller.

THANK YOU!!!
The seller of the adapter just enlightened me as well (called me) and luckily could switch me to the 26mm to rms adapter instead. It sure was painful to finally make sense of this. The key is the color of the ring around the head. Mine is black and that indicates it is for 26mm objectives.
Learning a lot. Not giving up yet....
Top
Post Reply Previous topicNext topic
14 posts • Page 1 of 1