I can't believe how much dust my bellows pumps onto my sensor. Any tips for cleaning them - I might try something as simple as holding a vacuum cleaner tube near the end and sucking a lot of air through.

That's cleaning the bellows, not the sensor.

Maybe a soft, moist sponge, as a pull-through, when the bellows are extended and detached from lens or camera.

Harold Gough wrote:Maybe a soft, moist sponge, as a pull-through, when the bellows are extended and detached from lens or camera.

You might try one of the dusting cloths made for the purpose and sold to housekeepers. We have had good luck with "Swiffer Dusters".

I find compressed air to work better than vacuum for this purpose. For my bellows units, I fully extend the bellows to stretch out the folds, then I blow it inside and out using a can of compressed air. I try to aim things down to let gravity help out, but not so much that I tilt the air can and release propellent drops.

I do this pretty regularly with my bellows units, and store them in large, zip closure freezer bags between uses. Like you, I'm concerned that without a bit of attention, a bellows would be a great device for pumping dust onto the sensor.

Chris S. wrote: Like you, I'm concerned that without a bit of attention, a bellows would be a great device for pumping dust onto the sensor.

Nah, more like this, you can see the standard "embossing" as Zerene works its way into the stack, plus all the dust bunnies turn into comet tails 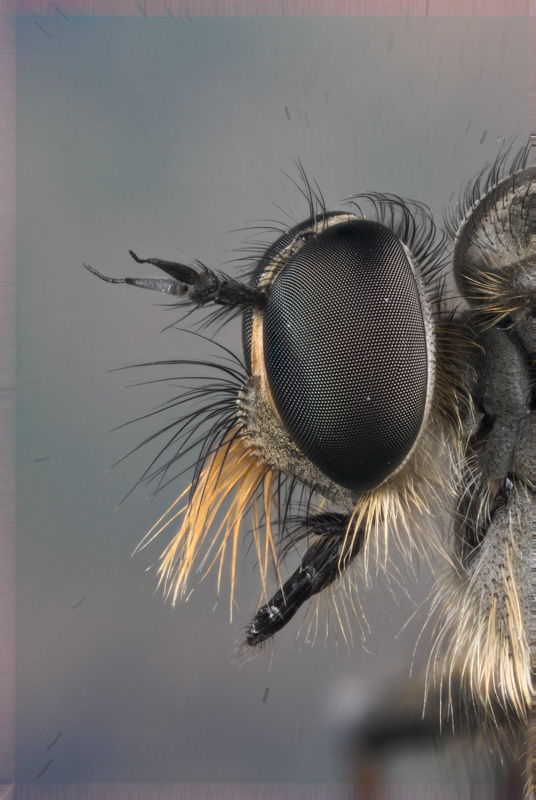 Wow, that's a bunch, all right. Looks like they're big and blurry, too, which means that software would need to use a flat-field technique instead of fill-in-the-gaps like HF does.

For some reason, my setup doesn't get nearly this dirty. But usually I do end up with a few streaks on featureless background, and I remove those by retouching in ZS.

The trick I use for retouching is to paint over offending background using a large brush, sourcing from the rearmost input frame. That kills the streaks, leaving me with only the round blurs of dust in a single frame. Then I select a different input frame from farther forward in the stack, where the dust spots are in a different place due to scale changes in alignment. That allows the remaining spots to be eliminated by clicking the mouse once per spot.

In addition to eliminating dust streaks, this method also gets rid of the noise buildup that's often visible in featureless background.

This trick doesn't work over areas containing subject detail, but streaks seldom appear in those areas anyway because of the way detail selection works.

Another variation of this technique is to do a DMap rendering as well as PMax, and either paint background from the DMap, or paint details from the PMax. But you'll still end up with the round spots, and retouching from a differently aligned source frame is a good attack on those.

Hope this helps. I'd like to quote you a date on when ZS gets flatfield correction and bad-pixel removal, but the schedule is too uncertain to do that.

Edited to add: if "embossing" means those streaked edges, then you can get rid of that just by reversing the order of frames in the stack. The trick is to process starting with the narrowest field of view. When you're focusing by changing subject-to-lens distance, that means starting with the frame focused farthest back.
Top

They are really easy to clear up with Photoshop "spot removal", I think my bellows is just really dirty- it's going to get cleaned tomorrow.

How does ZS determine the stack order ? Just the order they frames are in the list ? I usually shoot "front to back" so I always get this edge which I happily crop off. Could ZS have an option to stack in "reverse order" ?

ZS stacks in the same order as the list.

There is a menu item for File > Reverse Order that flips the list, but you have to remember to click it after adding files; it's not a sticky Preference.

By the way, please tell me about "spot removal" in Photoshop.

rjlittlefield wrote:By the way, please tell me about "spot removal" in Photoshop.

It is a great tool, a bit like the healing brush but automatically samples from around the brush location.
Top

rjlittlefield wrote:ZS stacks in the same order as the list.

There is a menu item for File > Reverse Order that flips the list, but you have to remember to click it after adding files; it's not a sticky Preference.

Note to self - next time I think of something clever, check that Rik didn't already do it

bye the way, what does "Show as adjusted" do ?

AndrewC wrote:What does "Show as adjusted" do ?

It causes source images to be shown as they ended up after alignment and brightness correction (if any).

The main purpose of that checkbox is to provide a way to confirm that alignment and brightness correction did whatever was required.

Use it like this: After processing the stack, check the "Show as adjusted" box. Hover the mouse over the source image display, hold down the shift key, then press-and-drag the mouse up and down to spin through the list of images. If everything has gone correctly, you should just see the focus plane moving forward and backward through a motionless unchanging subject. If you see flashing, motion, or scale changes in the adjusted images, then something has gone wrong and you should look at Options > Preferences > Alignment to figure out how to correct the problem.

Edited to add: You can also click the checkbox on and off a few times to flash the before and after versions of the same source image. This is often a good way of seeing exactly what the alignment process did.
Top
Post Reply Previous topicNext topic
36 posts