JW sent this to me, thought some folks might be interested. Note the use of the Piezo Stage

More on the Zeiss S-Planar Lens:

Thanks for sharing. I noticed the use of the objective that has been discussed here in the forum with no cover glass. 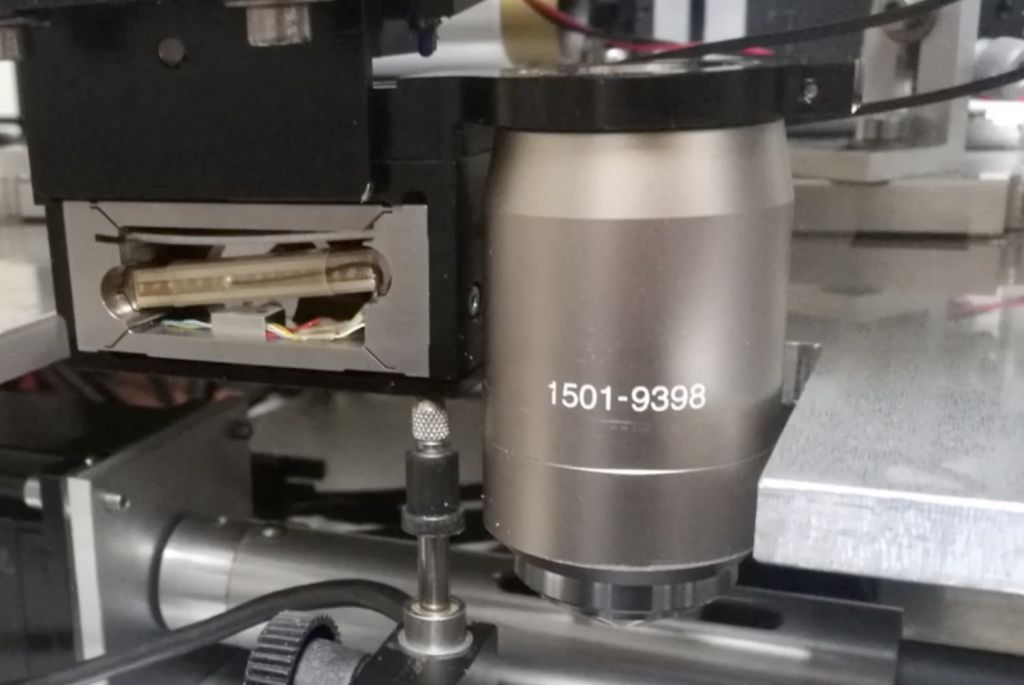 Robert Otoole originally sent it to me. Sure would be nice to have the money and skill set to play with things like this.

On this forum a year or two ago we saw earlier videos by this guy on mask-based photolithography, and about his Censor S-Planar with NA= 0.28. The videos are very interesting. However he made a couple of mistakes in those videos, for example his explanation the "Censor" logo. He thought it referred to a temperature sensor, but actually it is the name of the company that made stepper machines. He also said 405nm is a sodium line when it is really a mercury line.

So he may not know about the need for a coverslip on that Nikon 20x objective.

Edit: he replied on his site:
"Lou Jost by the way, I saw your remarks on the photomacrography website concering the Carl Zeiss lens video 1. After publication of the video I found out about the Censor ##### (somehow I was wrongfully convinced that this was the explanation) so I immediately put a remark in the comments. Also, I corrected the sodium-mercury mixup during editing by placing a remark in the top corner at 7min16 into that video. The problem with video's is that they are hard to change once published."

The third video about the S-Planar was especially interesting.

These Censor lenses come up occasionally on eBay, and only cost a few hundred dollars nowadays, though they cost many tens of thousands of dollars originally.

There is a nice seller on eBay now who has even newer models at affordable prices. For example:

Weird. I have one of those objectives (though the other part number, so not identical) and it really doesn't like air imaging much. Makes me.wonder if I need one of these as well!
Top

I have three versions and all want a coverslip.
Lou Jost
www.ecomingafoundation.wordpress.com
www.loujost.com
Top

I have perhaps a silly question regarding coverslips...for high NA objectives which require them, how critical is their position between subject and front of lens? You can probably figure out why I ask the question...
Top

I have often wondered that too. I've been told it doesn't matter, and Mitutoyo's technical drawing for their LCD-corrected 50x objective reinforces that conclusion. They draw a thick glass window in the optical path without including any distance information about the window, though all other distances are given in great detail.
https://microscopecentral.com/collectio ... -378-848-3

I have this objective and I have used it with a glass window laying on the subject, and I have also used it with the glass wndow tight against the front of the objective. I could see no difference between these arrangements.

Edit: I epoxied a filter ring to the front of the objective, and another to the glass window, so I can put the glass window on the objective for ordinary subjects, and can remove it when I need to shoot through thick glass or water.
Lou Jost
www.ecomingafoundation.wordpress.com
www.loujost.com
Top

ray_parkhurst wrote:I have perhaps a silly question regarding coverslips...for high NA objectives which require them, how critical is their position between subject and front of lens? You can probably figure out why I ask the question...

A perfectly planar coverslip, perfectly perpendicular to the optical axis, has the same effect no matter where it is placed.

So, an imperfect coverslip that works fine in contact with the subject could fail badly farther back. But a really good one should work anywhere.

ray_parkhurst wrote:I have perhaps a silly question regarding coverslips...for high NA objectives which require them, how critical is their position between subject and front of lens? You can probably figure out why I ask the question...

I glued a Zeiss coverslip on the objective permanently. I works great.

Lou Jost wrote:He also said 405nm is a sodium line when it is really a mercury line.

yeah, that made me suspicious too, since that's something that even I know ;)

but it seems to me that otherwise he has researched things pretty well and has quite a good understanding of how things work, and I apprechiate his effort to show all the diagrams etc (must have taken lots of time).
chris
Top

What an incredible build. Thanks for sharing the links.
Jonathan Crowther
Top

yeah, that made me suspicious too, since that's something that even I know

but it seems to me that otherwise he has researched things pretty well and has quite a good understanding of how things work, and I apprechiate his effort to show all the diagrams etc (must have taken lots of time).

Yes, it's an incredible and bold project, well presented. It's understandable that with a project so big, he might make a few minor mistakes and leave some gaps in his research. The error that bothered me more was his explanation of "Censor", which he seems to have completely made up. Anyway, my point was not to denigrate an amazing project and piece of work, but to caution that there might be other errors, such as the thickness of cover slip required by that objective. Until recently I think none of us knew the coverslip thickness required by the OEM versions. So that's somethng he could very well have missed. Though I would have thought that the default assumption would be that it behaves like the 20x 0.75 VC, which needs a 0.17mm cover slip, and says so right on the barrel in his diagram.

Edit: The coverslip issue was pointed out to him in the comments on Part 1 of his video six days ago. He responded that he had not known this, and he then claimed that his vesion did not need a coverslip, citing the Nikon website. But the Nikon website doesn't mention his version of the objective, as far as I can tell. Today I posted a comment there asking for more information.
Last edited by Lou Jost on Thu May 21, 2020 5:41 am, edited 4 times in total.
Lou Jost
www.ecomingafoundation.wordpress.com
www.loujost.com
Top

He's using a smaller range than the 12 bit DAC can deliver, probably 9~10 bits for driving the Piezo Stage. However doesn't need much range since this is used for positioning the objective and he's working with planar subjects almost perfectly normal to the optical axis. We have the same stages and using a 16 bit DAC at full scale for greater piezo stage resolution and range.

There are quite a lot of these Nikon 20x/0.75 OEM objectives out there right now, being sold as the OEM versions of the Plan Apo VC, and I don't think they were used in a microscope. One listing shows the lens mounted to an assembly very reminiscent of the photolithography setup shown in the original post (could also be for automated inspection, or gene sequencing as suggested in prior posts). With hundreds of objectives in a large order, Nikon might well have tweaked the lens for this order.

Also of interest, there may be two versions of this OEM objective, and the surplus dealers don't seem to have it completely straight. The YouTube poster has lens clearly marked 1501-9398 (see screenshot earlier in this thread). But the Ebay seller and listing pointed to by that YouTube poster shows pictures of an objective marked 0500-0087, which is also in the listing title. But in the text of that same listing it says "you will receive Nikon 20x Microscope Objective 1501-9398" - maybe they're the same, maybe not!

I don't suppose anyone has both...?
Top
Post Reply Previous topicNext topic
21 posts