Flash through a compound microscope?

Flash through a compound microscope?

I photograph lots of fungal spores... often under 10 micrometers, and texture of the spore wall can be important. So I am trying to maximize sharpness of photos. Two things are working against me:

1. The Nikon E200 trinocular scope (photo below) I have has such a long tube extending to a camera that the slightest shake causes a huge amount of motion. The photo has a micro 4/3 camera attached, and even it gets enough shutter vibration that photos get too blurry for me.

A long exposure minimizes the first, but maximizes the second. A short exposure does the opposite... unless I can get enough light for a really quick exposure. That requires more than the little bulb in the scope can put out, even with a pretty high ISO on the camera. Therefore, I'm experimenting with getting a flash to go up through the condenser.

I've tried a camera flash to the side while holding a reflector under the condenser, and I've deconstructed a flash unit, and added wire so I can hold the bulb under the condenser (WARNING: capacitors in flashes can be dangerous - don't do this unless you know what you are doing). Both work ok-ish, but it is difficult to position them well for even illumination. The light housing itself does have a lens and aperture that this method by-passes, so the optics are not ideal.

Does enyone have better suggestions? I've considered trying to mount the flash bulb within the light housing itself, but that would not be easy and would require drilling some holes in the housing. Would it be worth it?

Thanks for your thoughts!

A relatively good shot with the flash from the side: 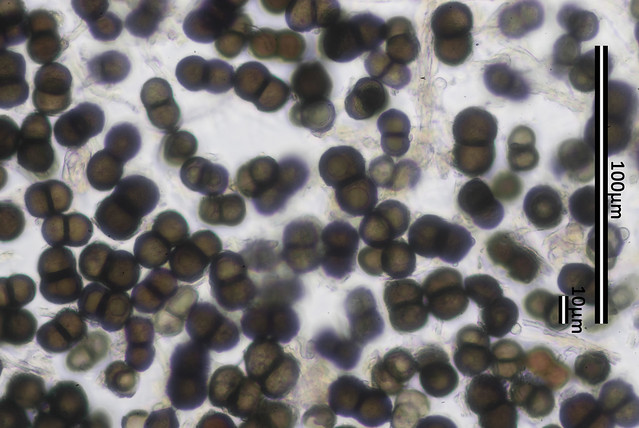 A commonly poor shot due to light not coming perfectly up the middle of the condenser: 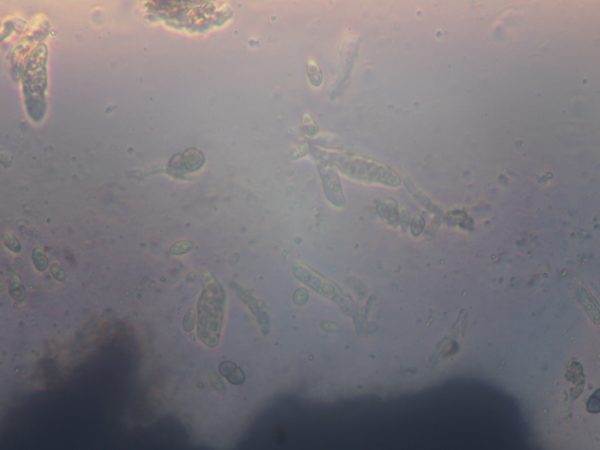 use a bunch of fiber optics?
https://www.facebook.com/groups/mjkzzfs/
Top

Microscopes with rear external lamp housing are much more versatile, with in base illuminator it narrows the options basically to what you're trying: a half mirror under the condenser or a flash tube inside the illuminator. If you have the halogen version for the second option would be almost indispensable to change it for a LED or the lamp heat will damage the flash tube as they must be very close to provide similar illumination.

In any case, a custom built adapter to fix the components position to be easily repeatable once tested OK will be very convenient.

I'm curious about the camera you use and how it is adapted, could you provide more info and more detailed pictures?. There are cameras able to give vibration less work and also adaptations to place them at much lower position, you can even place the camera without lens just over the trinocular port for direct projection on sensor.

For bright field work a powerful LED at the illuminator would suffice to have high shutter speed at low ISO without flash.
Pau
Top

I do a lot of photography of spore wall ornamentation and it can be difficult for the reasons you have described. I think there may be easier ways forward than flash - maybe change the long adapter?

I have found c-mounted Touptek microscope camera to work fine on a short 1x adapter on an E600. Light is never the limiting factor. I can post some photos of set up and results on a separate thread if it would help.

Spore movement is a big issue but very carefull slide prep can help - including drying and rewetting or the use of more viscous media (eg low % glycerine or Hoyer's medium).

I would try to take down the very tall camera adapter setup.

You can then place the camera sensor (m4/3) in the plane of the intermediate image using a custom-made adapter.

If the Nikon E200 trinocular is similar to the trinoculars of other manufacturers, this approch requires no additional optics and the size of the m4/3 sensor (22 mm diagonale) is ideal for this "direct projection" approach.

I don't have a Nikon E200 so I can only guess where the intermediate image is located. If you see the adapter here: http://www.seoenterprises.com/shop/prod ... ctid=16385 (obviously I don't recommend buying this

I own the Nikon E400 which is also a CFI-60 microscope.Why are you using such a long tube between trino head and the camera?
My photography setup has a much shorter tube.
In order to get a proper advise please answer the following questions.
Are there any additional optics inside the tubes?
When your camera is in focus, please have a look through the eyepieces .Let us know if your eyes seeing a focused image.
Top

Thanks all! The consensus seems to be to abondon the lengthy tubes (and an objective inside) that the Nikon rep had insisted was the right way to go. Instead, find a lower focal plane that should work.

I've actually played with that in the past, but found it a little awkward for getting focus matched between the camera and the eye pieces while also keeping my micrometer sharp. The objective in the tubes allows for separate focusing of the camera.

Someone asked which camera I'm using... I go back and fourth between an Olympus EP-3 (micro 4/3 - my current preference simply for the tilt-up screen) and a Nikon d7100 (better resolution, but perhaps unnecessarily so).

I'll see what I can do and post the results.
Top

I've actually played with that in the past, but found it a little awkward for getting focus matched between the camera and the eye pieces while also keeping my micrometer sharp.

This might help to give you an idea of distance (this is on an E600 but I think optics are the same on an E200).

The 3cm distance to sensor is approximate (as there is a filter in the way). The 1.5cm labelled base actually forms part of the trinocular head.

I looked into mouting an micro 4/3 on top of one of these adapters with a c-mount fitting and it was a little tricky to find the right adapter. The sensor would also be in a different position. 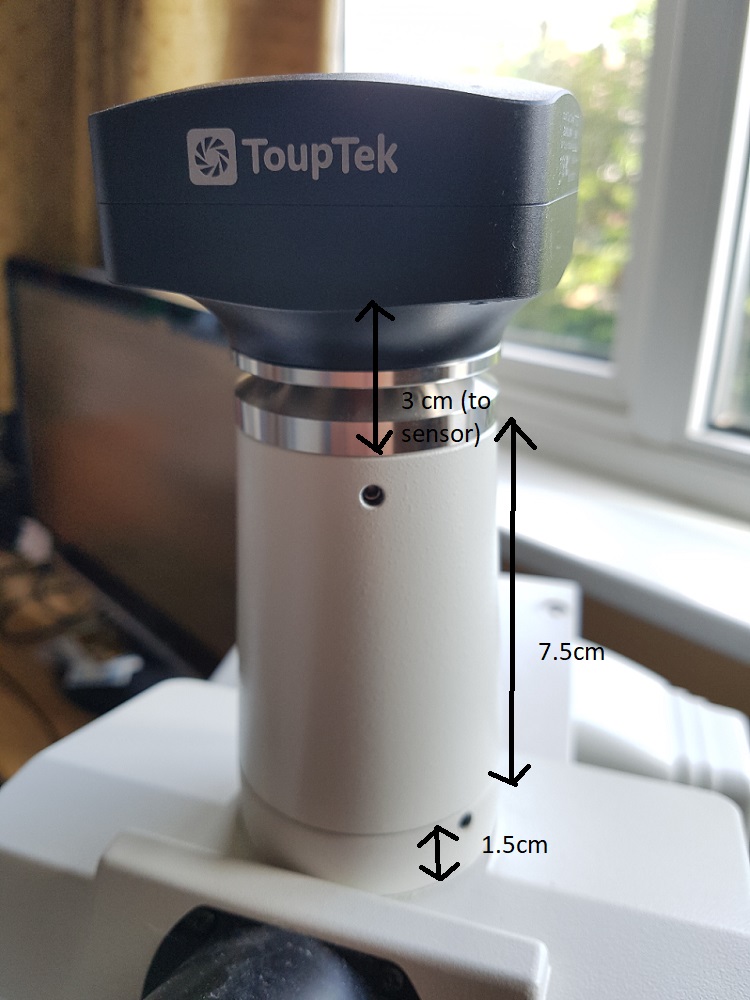