I thought that dragonblades thread 'Diameter of black disc for darkfield?' was getting a bit off his original topic and decided to start a proper thread discussing a potentially adjustable DF condenser. Saul brought up the idea and it has since been on my brain... no one has made one so there must be a good reason not to, right?

Well, I went off hunting. Nothing! Not even a passing mention anywhere I could see, so I decided to run an optical simulation. Here are the results of a quick and dirty sim. Center dome at the two usable extremes with a virtual laser beam. 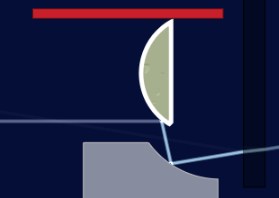 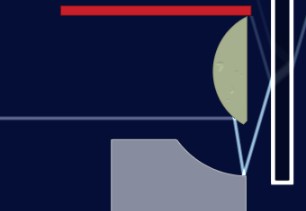 Next I took the sim shots into a CAD program and modeled the reflectors based on the sim. Next I designed a simple to 3d print housing where the dome is fixed as it's the weakest part, and the mirrored dish is adjusted up and down by turning the housing on a thread as seen below. Sectioned and exploded, consisting of 5 parts. 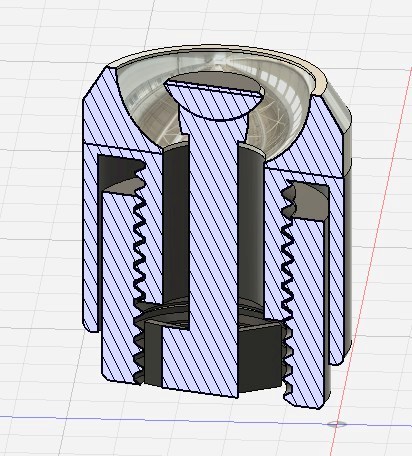 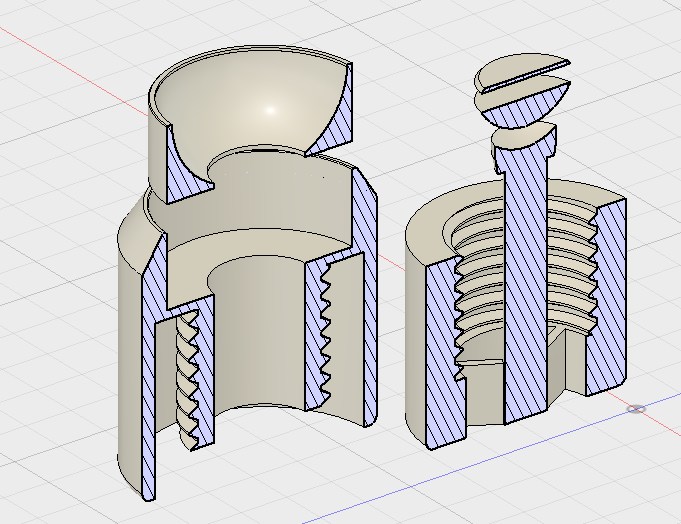 The final step was to test the theory by ray tracing the model to see if the rendered results match the simulation. They do! So it seems probable that this one condenser could work from 10x to 100 oil. 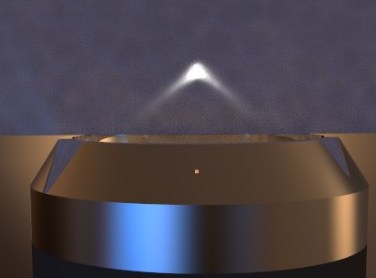 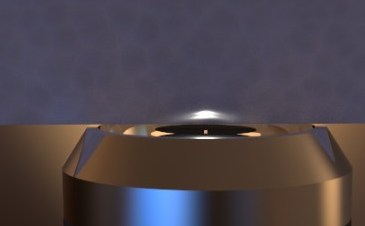 Bear in mind this was all just done in two or three hours as a rough and ready initial proof of concept to satisfy my curiosity. It's not something I can make myself, the housings, maybe but not the reflectors. Anyway, I think Saul is really onto something and I had to test for myself.

Comments, questions or suggestions would be welcomed because I don't know enough to know how much I don't know.
Top

Hi Gary, thank you for opening this thread, hopefully somebody more knowing than us will join this conversation and en-light us

From the last time I made some small changes to the my model:
https://www.3dvieweronline.com/members/ ... Tw1eht1zgd

In the beginning I had the same idea to make threaded housing, but .... my version will be 3d printed, so threaded housing is out of the question. Another thing - it will be hard to make an adjustment when condenser is already sitting in the holder. So I'll be using long screw (in the initial beta version). And, I hope, I can use Rheinberg filters, so I made that small 32mm tray. Now problem is that long adjustment screw in the way of the filter. For testing purposes I'm going to make narrow U shape cut in the filter (and black disc). Not sure how will it affect the picture. Theoretically I can rotate that 3-ray thread holder and one part of it will cover that U cut (hmm, good idea, will do that). My filters & discs are printed on the cheap clear sheet.
https://www.amazon.com/gp/product/B00KW ... UTF8&psc=1

Comments, questions or suggestions would be welcomed because I don't know enough to know how much I don't know.

I thought this was a interesting video. I'm not a Fusion end-user but I have played with it a little. I am a Rhino 3D user.

An adjustable COL condenser should ideally provide a wide range of different NAs and illumination ring of adjustable width (from a narrow ring to a wide ring). This is because thin ring (as in case of Heine) may produce too much shadow effects.
Selling my Canon FD 200mm F/2.8 lens
Top

An adjustable COL condenser should ideally provide a wide range of different NAs and illumination ring of adjustable width (from a narrow ring to a wide ring). This is because thin ring (as in case of Heine) may produce too much shadow effects.

Hmmm, Heine is pricey/too good for such low starter like me ... And regarding commercially available condensers - I will have to adapt them to my Labophot base. Can they be used with the Labophot condenser holder ? Can you, please, post some links to them ?
Saul
μ-stuff
Top

You need a "Nikon dovetail adapter" to adapt 3rd party condensers to your Labophot. Here you can see I glued Heine to a few Legos then to that dovetail adapter:
http://www.photomacrography.net/forum/v ... eine+nikon

And here you can see a Leica condenser sitting on the Nikon dovetail adapter: http://www.photomacrography.net/forum/v ... r&start=15

I bought mine from my local Nikon microscope dealer, for $30 each. This is the dealer's web page: https://www.landseaskyco.com/microscope ... 0&max=1500

Ask for the owner Leslie, or person in charge of microscopes, if you want to call them to buy such an adapter. They don't list all their parts for sale.

But I think you can simply 3D print such an adapter. It will work, as long as the bottom diameter fits your dovetail. That bottom (widest) diameter is 45mm and its top section gradually shrinks, just like Nikon head dovetail. Or simply cut and use the bottom of a Nikon Labophot condenser.

Don't regret not having a Heine condenser. Its application is pretty limited; in many cases, it produces too much shadow effect, such that images are not very pretty (sort of like mirror lenses or phase contrast).

Another nice thing to have for an adjustable COL condenser may be the ability to decenter it. Though it may not be easy to implement that feature well.
Selling my Canon FD 200mm F/2.8 lens
Top

Saul, good ideas on the condenser

At least now we know that the sims confirm that the idea is sound. I also just put a pack of that transparency paper in my cart, seeing as I have a laser printer.

Fan, if an iris is fitted to the base of these designs then the width of the beam ring can be adjusted as well as the positions of the reflectors for the beam angle. So in theory it could work as both DF and COL anyway. After all, COL can be as simple as an undersized DF stop, which is what I used along with the iris to set the annular width.

Smokedaddy, I use fusion 360 as my man cad modeler and it's a nice program. Simple and quick. Having big libraries on hand to import directly is pretty nice.
Top

Initial 3D model (not tested yet), comments/suggestions are welcome 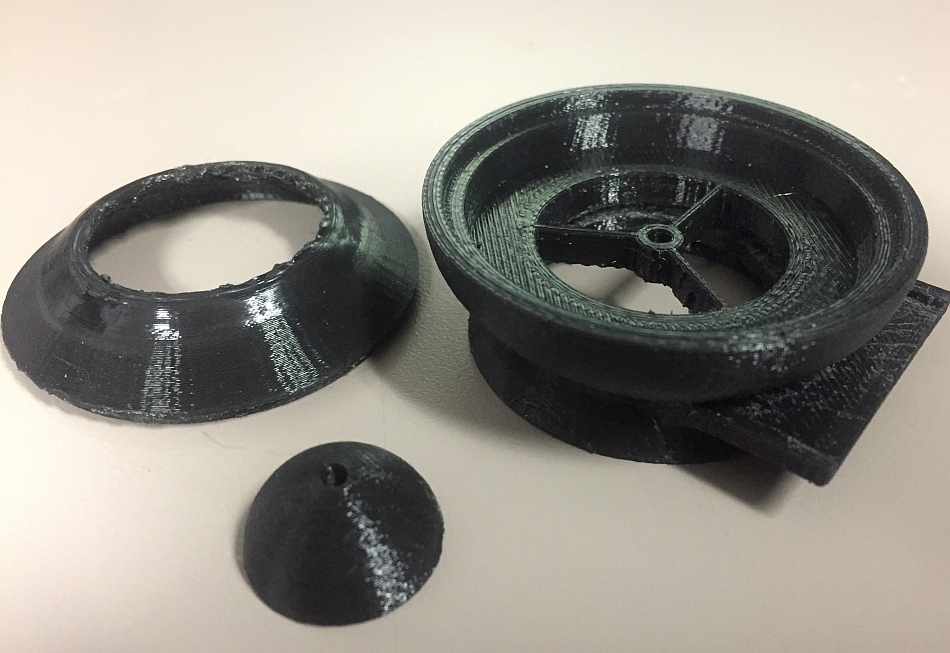 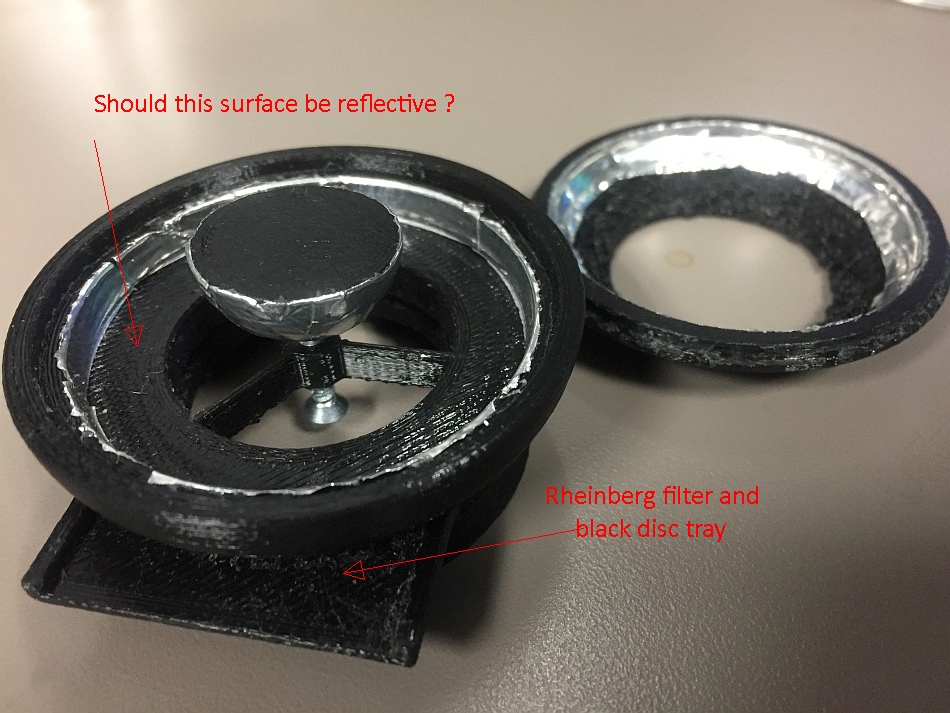 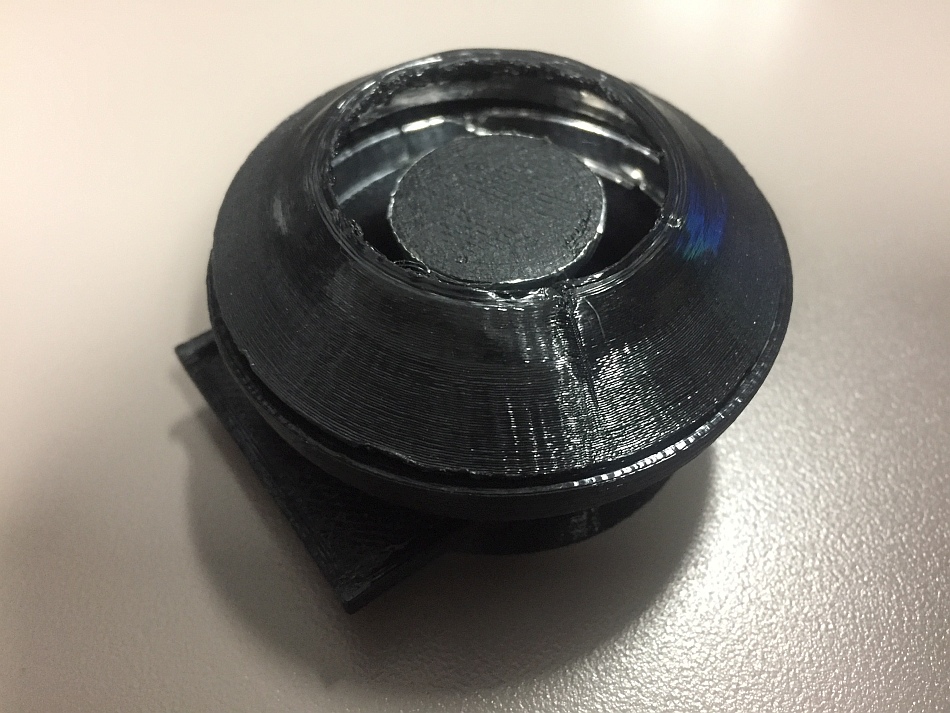 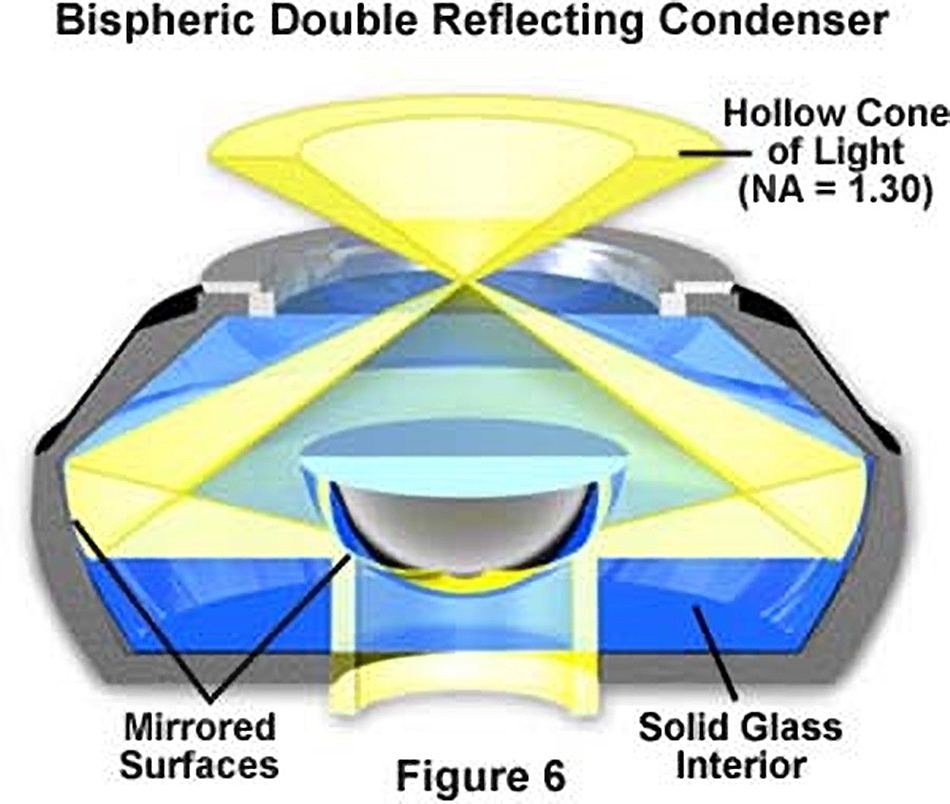 I think the bottom shelf should be non-reflective. I'm looking forward to the tests

I'm a bit confused by this.
Available DF oil immersion condensers aren't limited to higher magnifications because they don't work at lower magnifications, it is because the cone of light falls inside the f.o.v. Simple adaptions such as putting a toric lens under the condenser, such as AO, DF condensers have , allows usefulness to be extended to an actual field of at least 800 um, so it's range is 25x-100x with 20mm eyepieces. I haven't tried in a while but one might work with a 20x too. For lower magnifications, which I find rarely that useful for DF, the 100x phase annulus through an achromat aplanat .90 dry condenser works perfectly, so at those magnifications a simple switch of the condenser also provides condensation with a high degree of freedom from chroma.

I can see that moving the central stop will solve the problem of the cone falling inside the field at lower magnifications for a typical oil DF condenser but one of the hallmarks of a cardioid condenser is the fact that it is a homogenous reflecting condenser and therefore does not induce chromatic aberration, a decidedly ruinous defect in DF.

In the design I see above, there must be glass to air surfaces inside the condenser and therefore would some degree of chroma not be the result as well as a reduction in the N.A? I can only see it working satisfactorily, if the condenser was a sealed oil bath condenser, where the two reflectors moved against each other in such a way, so as to maintain homogeneity of the n.
Top

Phil, thank you very much for your input !


GaryB wrote:... The final step was to test the theory by ray tracing the model to see if the rendered results match the simulation...