Just wondering if anyone has cut the top section off a LABOPHOT-2, just leaving the focus block assembly? I have machining abilities so I'm not concerned HOW to do it, only IF it can be done without screwing anything up on the vertical column? I can't tell if there's enough room to do so either (before the curve starts that goes towards the nosepiece? I've never personally touched one so I have no idea. Also IF you have experience doing so, how 'short' (or tall) is possible? 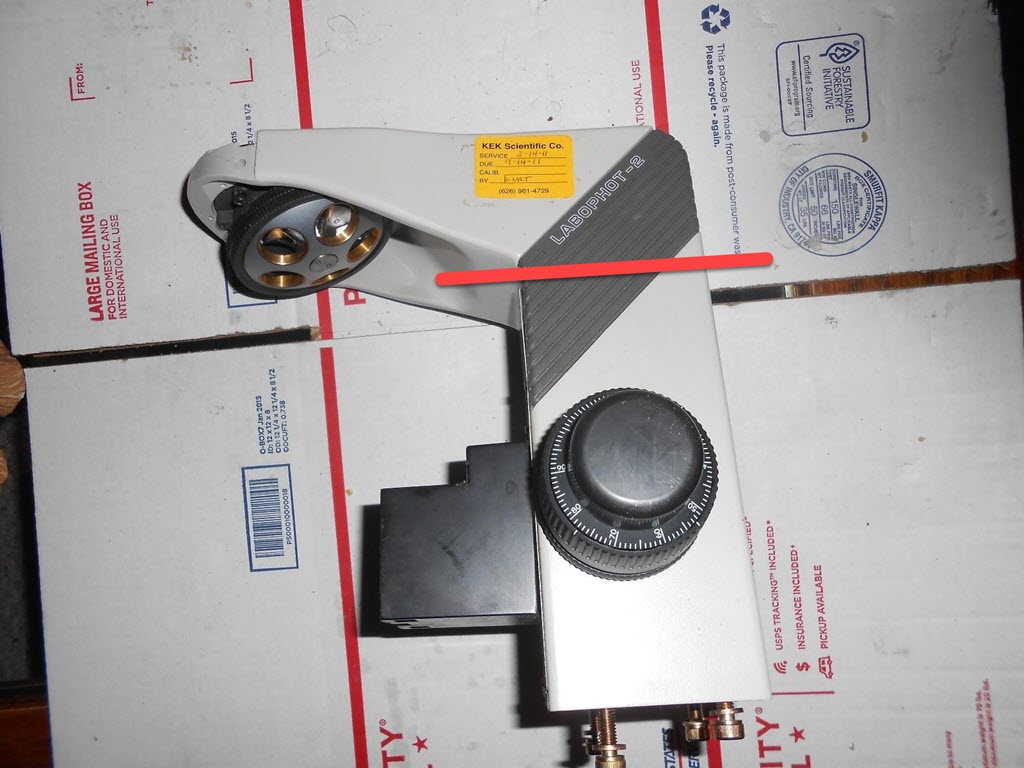 One way to avoid risks is by cutting away the part of the column at the point where it bends forward to hold the objective revolver, making a vertical cut instead of a horizontal one through the upright part of the column as you indicated. This will avoid cutting into any focus mechanisms that might extend into the top of the column. Once done this, hopefully you can look inside the arm through the cut surface, and hopefully see how much more of the column you can safely cut away. Move the focus rack all the way up and all the way down to make sure you are not going to cut into any important part.

I have a similar Nikon focusing rack mounted in a casing made for integrating into OEM equipment, but despite the similarities it seems to be quite a bit larger and longer than the rack on the Labophot 2, so its measurements may not apply to your microscope stand.
--ES
Top

The Labophot 2 has a plastic panel over the back of the stand: https://ibid.illinois.gov/item.php?id=347801#gallery What do you see when you take it off?
Top

Thanks for the suggestion. That's what I would do if I purchased one of these. I'm actually looking for 'something' that I can mount on the base plate OR 'column" on my Nikon MM-11. I can fabricate or machine just about anything, I just don't know what's available that might work. Ideally I would love to use a Optiphot Biological focus block so I could use my Optiphot condenser carrier and its accessories (like my Nikon interferomter stage) but I haven't been able to find one without buying a entire microscope. I realize it would need to be centered properly on the base which isn't an issue for me to do. 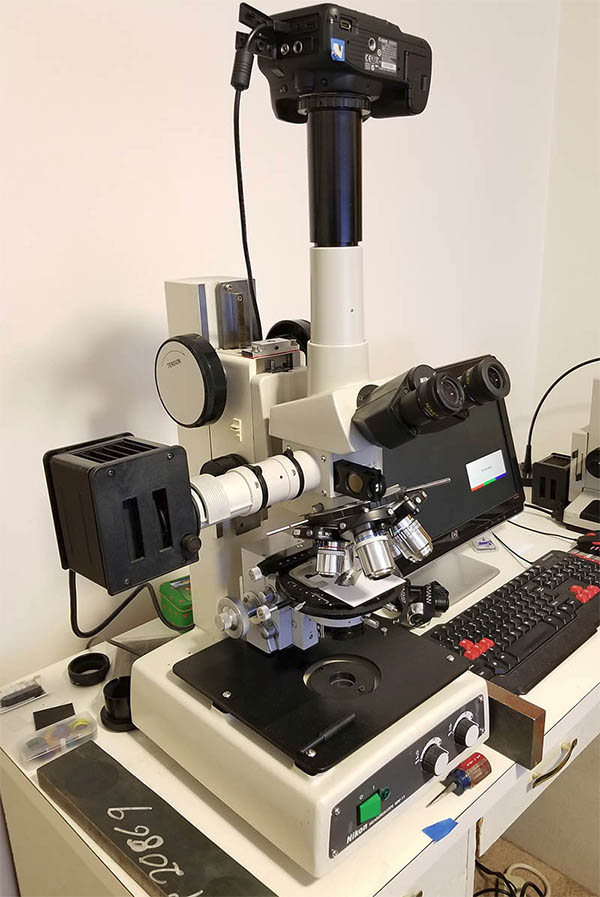 Ichthyophthirius wrote:The Labophot 2 has a plastic panel over the back of the stand: https://ibid.illinois.gov/item.php?id=347801#gallery What do you see when you take it off?

I haven't purchased one yet, just asking questions for now.

You won't hurt anything with a cut at the top of the orange line indicated. I harvested a Labophot 2 block a week or so ago with a cut at exactly that place--no problem at all.

Chris S. wrote:You won't hurt anything with a cut at the top of the orange line indicated. I harvested a Labophot 2 block a week or so ago with a cut at exactly that place--no problem at all.
--Chris S.

Thanks, are the Labophot-2 tick marks 1um?

I have a number of Labophot-2 blocks waiting to be harvested, trimmed with aluminum facing, fitted with Arca-style components, and motorized. Among the forum friends collaborating on this, these blocks are known as “The Elephants” (perhaps because it's hoped I'll finish within the life-span of an elephant). There will eventually be a post about the making of Elephants, but it’s a ways off. In the meantime, here is a before-and-after image of the cut you're talking about: 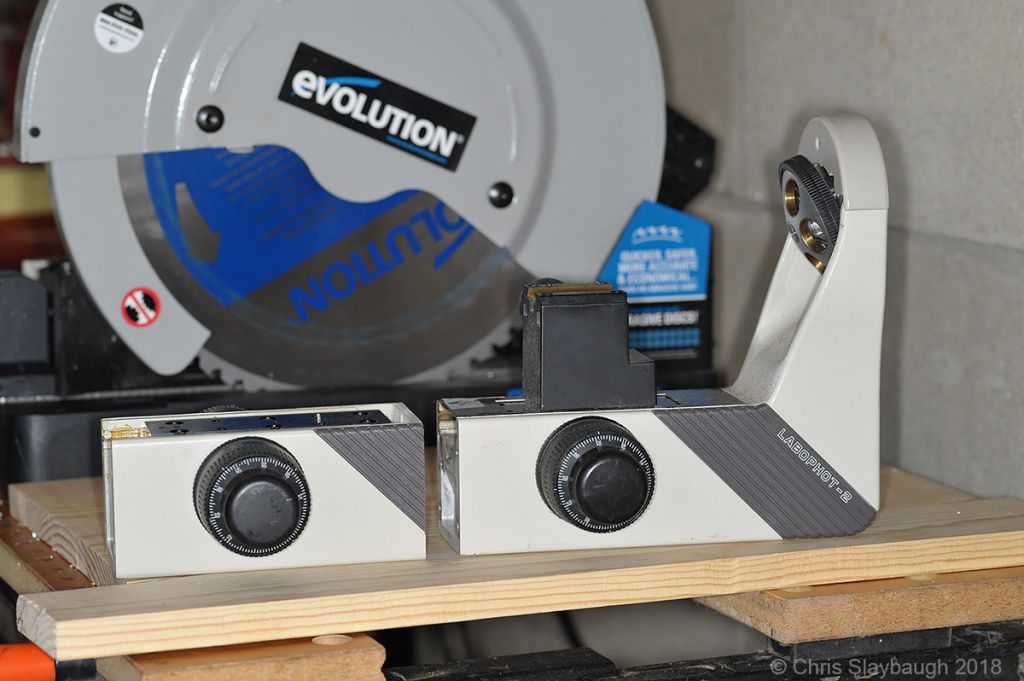 I’ve emailed you additional close-ups that should give you a good idea of what you’ll be dealing with. Labophot-2 blocks are excellent, but harvesting one does involve some fabrication. Not an issue for you, but of course it would be for some.

Yes--100 microns movement per turn of the fine focus knob, with 100 tick marks on the knob.


Smokedaddy wrote:Also IF you have experience doing so, how 'short' (or tall) is possible?

The length of the harvested block above is 6.5 inches. If you wanted something longer, you could cut on the blue line in the following mockup: 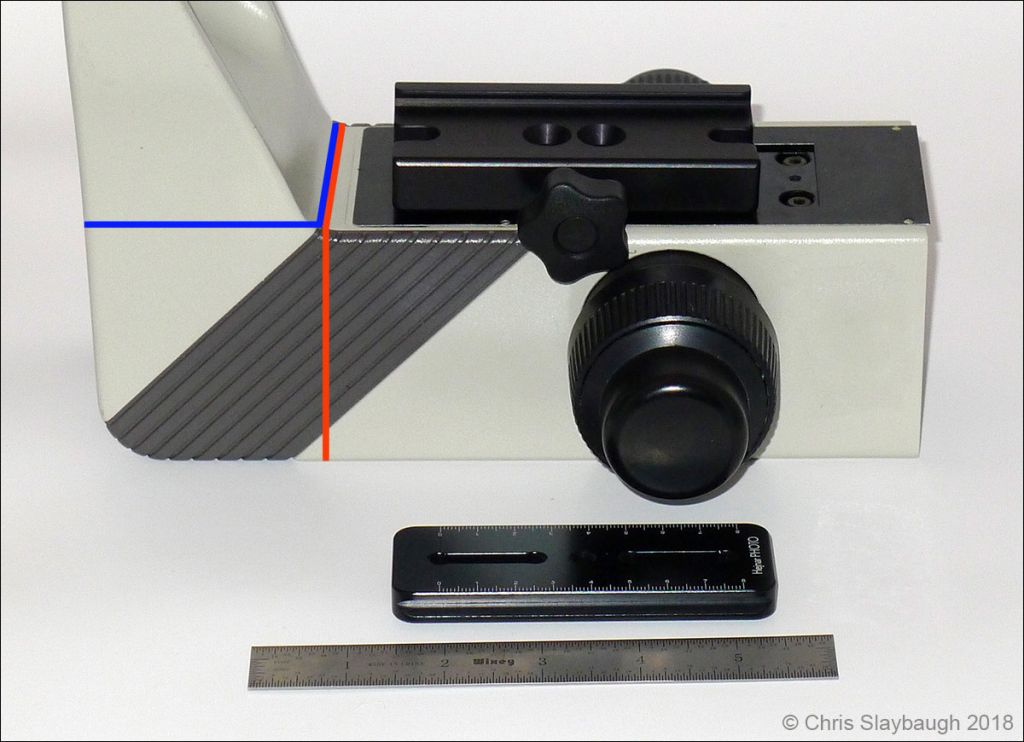 I can measure the potential length for you if you're interested in this approach. I chose the orange cut line, as it seemed cleaner, and I couldn’t see a need for the additional material left by the blue cut line. The face exposed by either cut will not be uniformly solid, but each has plenty of solid material for attaching a metal facing that one could fabricate (or it could be left open).


Ichthyophthirius wrote:The Labophot 2 has a plastic panel over the back of the stand. . . .What do you see when you take it off?

One sees this--which will require the fabrication of a metal face plate for most implementations: 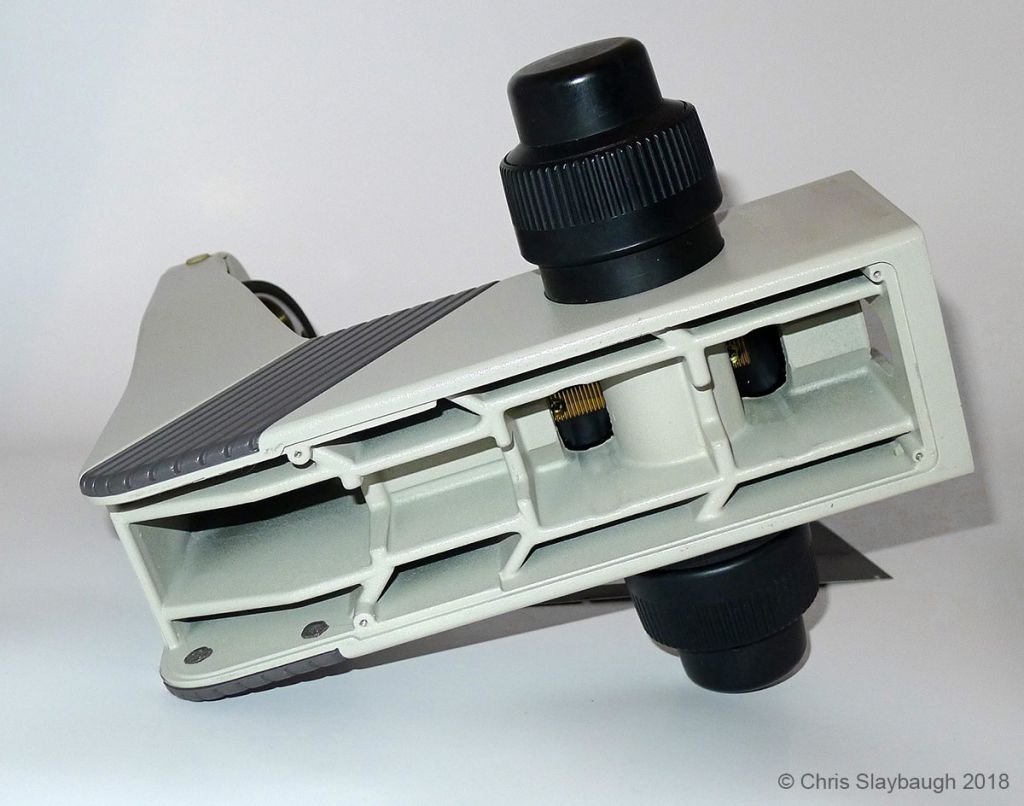 Thanks for the clear answer and nice pics. That's almost the information I needed. I also need to be able to adapted a Nikon Optiphot Biological condenser carrier to the Labophot-2. Naturally I will need to fabricate/machine/3D print 'something' to make that happen.

1. Would you give me the measurements shown in the pic below? 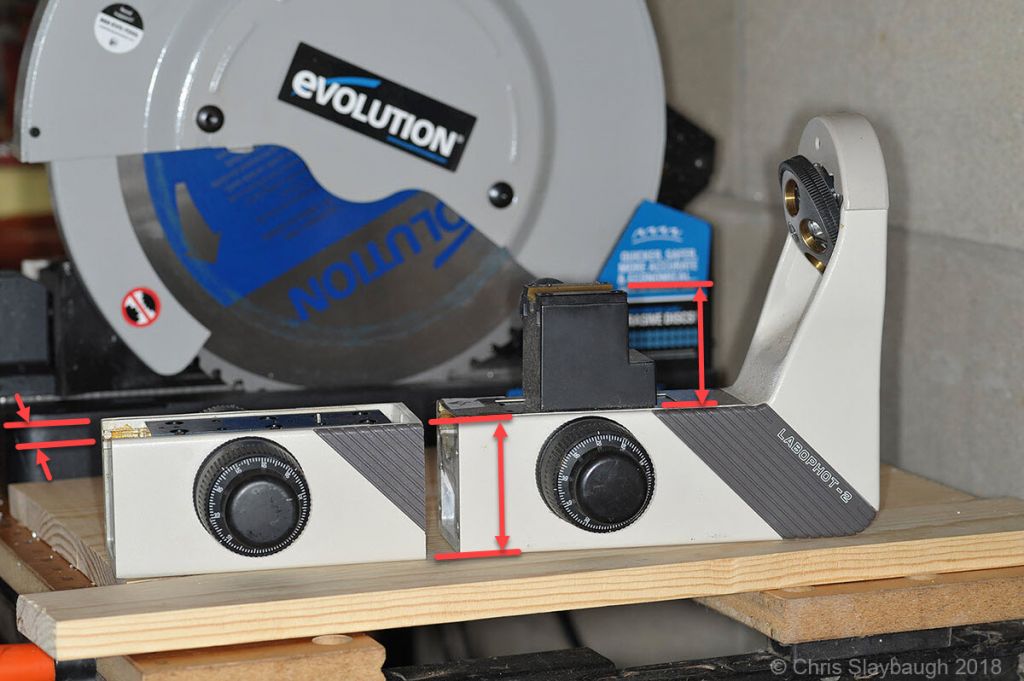 Smokedaddy wrote:1. Would you give me the measurements shown in the pic below?

For clarity, here are those measurements, plus a few more, marked on images that better show what is being measured (plus measurements for the Labophot 2 condenser dovetail on the off chance of compatibility with, or adaptability to, the Optiphot): 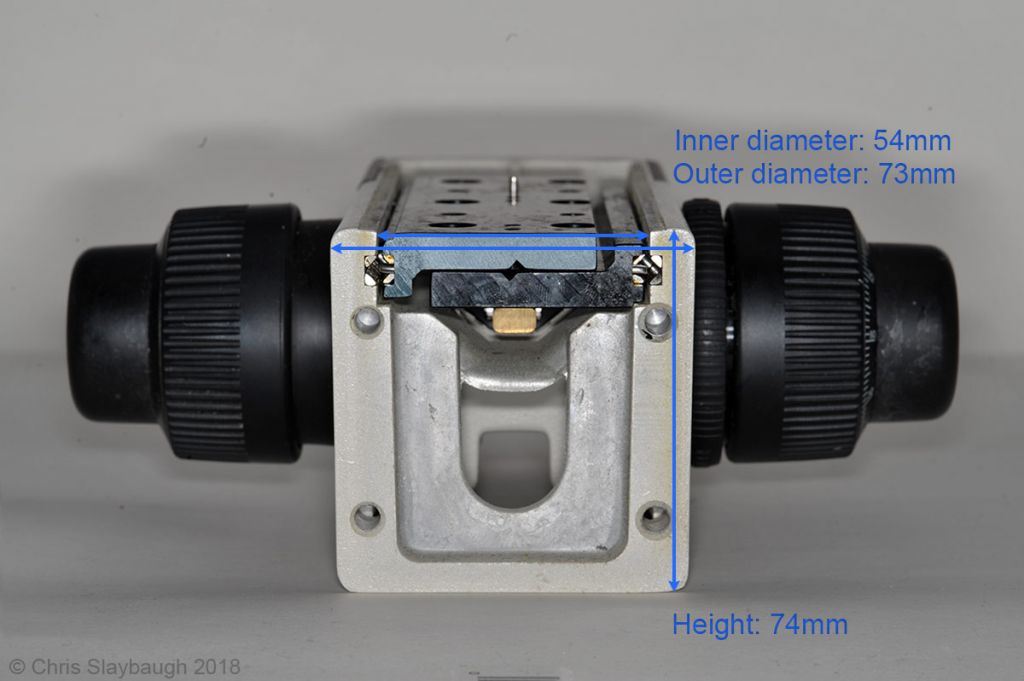 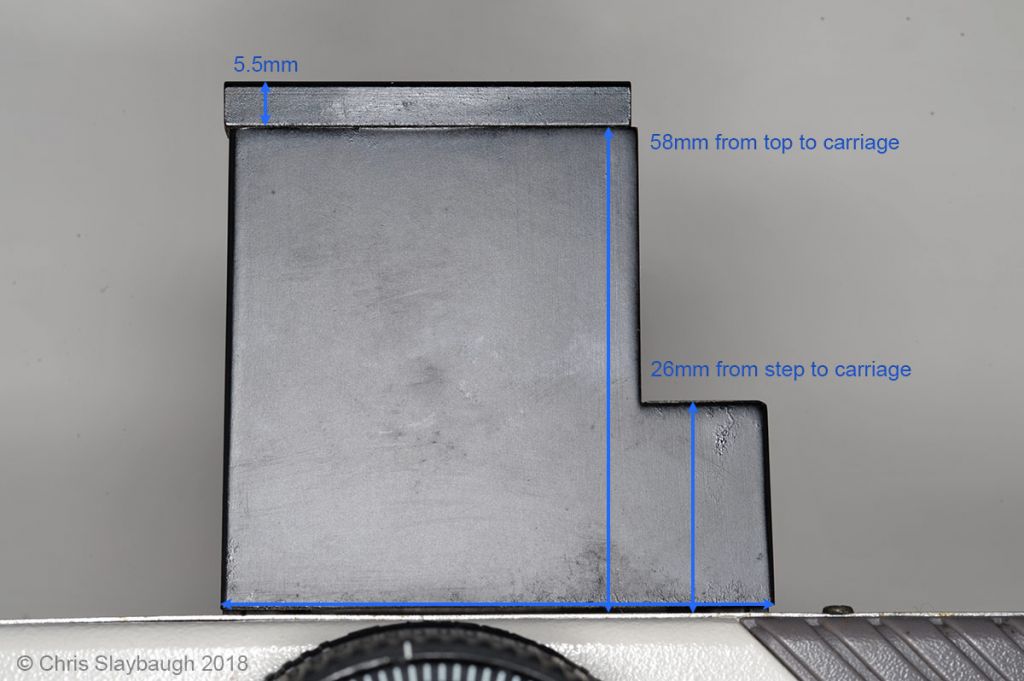 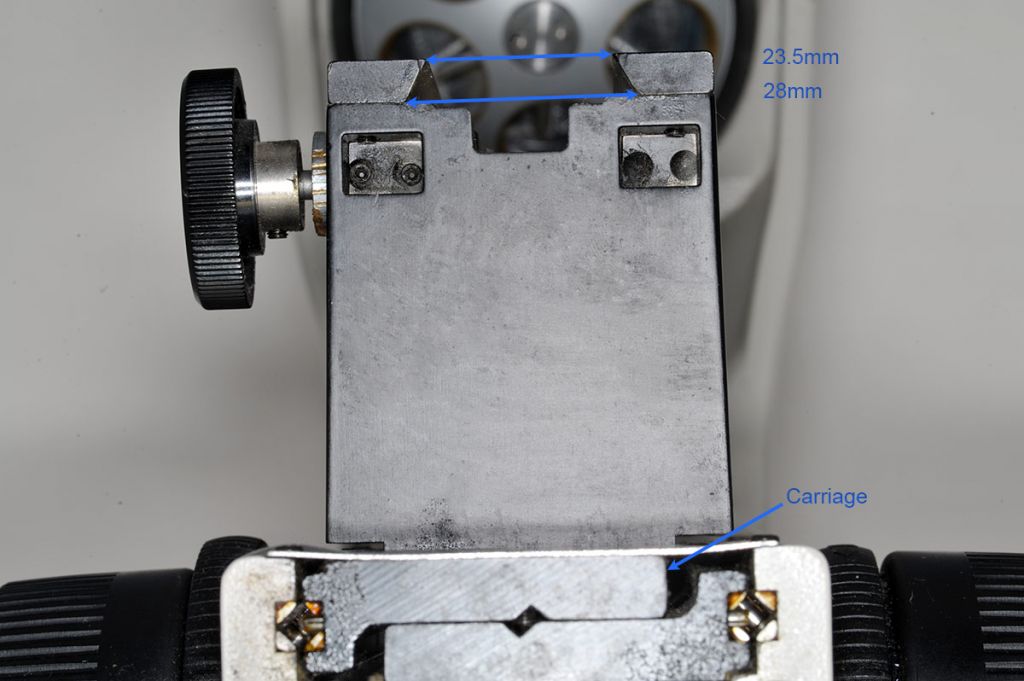 Practically speaking, no. On the other hand, if someone dared you to do it, you perhaps could, though with more machining and risk of failure than it's likely worth. The job would require shortening the carriage and the bearing races. If you want more details, say the word.

Thanks for taking the measurements. It's a nice looking FB and 1um increments too. I could use one of those for something else but unfortunately it won't work on my MM-11, nor will the Optiphot Biological or Optiphot POL (there the same microscope). I could machine the column on my MM-11 to make it weork but I don't want to do that. So this scenario is history. Sorry for wasting your time but maybe someone can use the information down the road. Now onto option #2.

FYI, the Olympus BHMJ block is 3.5 inches tall, and is very easy to integrate.

I have a couple BHMJ blocks but both have issues. The next adventure is to find something like a z-axis positioning stage, manual or otherwise that is capable of 1um and less steps.
Top 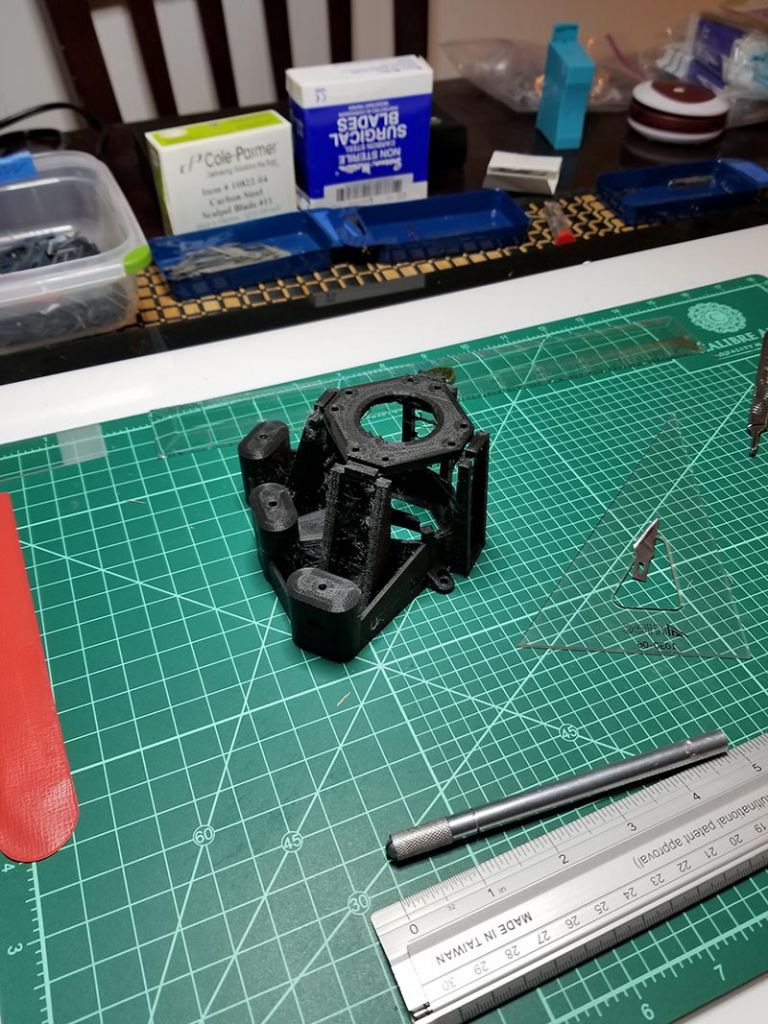